Comments (0)
Add to wishlistDelete from wishlist
Cite this document
Summary
CONTENTS Overview 2 Tourism Life Cycle Model 3 Consumer behavior of the Tourism Industry 3 Changing role of technology and the Changes in tourism niche marketing 4 Impact of changing market niche on Thomas Cook over the years 5 Market segmentation of Thomas Cook 6 Position of Thomas Cook in the global tourism/hospitality market 7 Favorability of Thomas Cook’s Market Position 8 Price strategy and Yield Management as Competitive Strategy 9 Networking relationships for Thomas Cook in relation to other Competitors 10 Proposed new techniques and innovations 10 Conclusion 11 THOMAS COOK Overview The tourism industry is one of the most financially profitable ventures as it generates ?…
Download full paperFile format: .doc, available for editing
HIDE THIS PAPERGRAB THE BEST PAPER91.5% of users find it useful 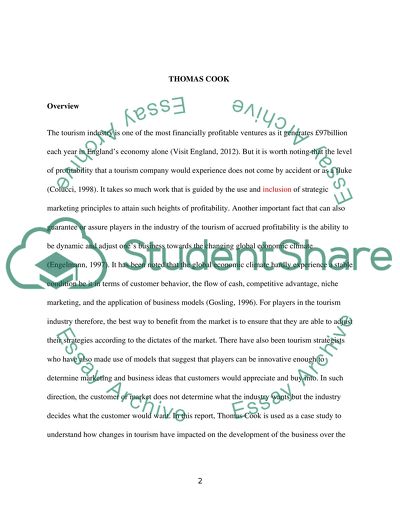 Download file to see previous pages Another important fact that can also guarantee or assure players in the industry of the tourism of accrued profitability is the ability to be dynamic and adjust one’s business towards the changing global economic climate (Engelmann, 1997). It has been noted that the global economic climate hardly experience a stable condition be it in terms of customer behavior, the flow of cash, competitive advantage, niche marketing, and the application of business models (Gosling, 1996). For players in the tourism industry therefore, the best way to benefit from the market is to ensure that they are able to adjust their strategies according to the dictates of the market. There have also been tourism strategists who have also made use of models that suggest that players can be innovative enough to determine marketing and business ideas that customers would appreciate and buy into. In such direction, the customer or market does not determine what the industry wants but the industry decides what the customer would want. In this report, Thomas Cook is used as a case study to understand how changes in tourism have impacted on the development of the business over the years and how the company can position its self to take advantage of available strategies to consolidate its position on the global tourism market. Tourism Life Cycle Model of Thomas Cook Group The tourism life cycle model identifies six (6) main stages with any tourism or hospitality outfit in terms of levels of growth. Generally, the model holds it that tourism resorts start from very low beginnings and progress steadily until they have attained stagnation (Cummings, 2010.). Of the six stages of phases are the exploration, involvement, development, consolidation, stagnation, and decline or rejuvenation stages (Jamieson, 2000). The exploration and involvement stages are generally pre-establishment stages where people identify their localities to determine the form of tourism or hospitality model that would work best for them. In the case of Thomas Cook, such a stage could be linked to when Mr. Thomas Cook first involved himself in an excursion in which he took 540 temperance campaigners to Loughborough from Leicester Campbell Street. This sparked his interest to start his own company. Commonly the development and consolidation stages are those stages when the established business begins to see significant growth and this is the stage that Thomas Cook could be said to be currently. Stagnation and decline stages are perhaps stages that Thomas Cook would want to avoid as it is commonly associated with reduced income and revenue (Evans, 2002). Consumer behavior of the Tourism Industry The tourism industry is one with a highly predictable, and yet unstable consumer behavior (UNEP, 2003). Understanding the consumer behavior of the industry is important in designing strategies that can meet consumers at the point of their needs. Commonly, the company targets specific market segments after carrying out market research so as to align the ...Download file to see next pagesRead More
Share:
Tags
Cite this document
(“Position of Thomas Cook in the global tourism/hospitality market Essay”, n.d.)
Retrieved from https://studentshare.org/tourism/1404378-thomas-cook
(Position of Thomas Cook in the Global tourism/Hospitality Market Essay)
https://studentshare.org/tourism/1404378-thomas-cook.
“Position of Thomas Cook in the Global tourism/Hospitality Market Essay”, n.d. https://studentshare.org/tourism/1404378-thomas-cook.
Comments (0)
Click to create a comment or rate a document

In th...
8 Pages(2000 words)Case Study
sponsored ads
Save Your Time for More Important Things
Let us write or edit the essay on your topic "Position of Thomas Cook in the global tourism/hospitality market" with a personal 20% discount.
GRAB THE BEST PAPER

Let us find you another Essay on topic Position of Thomas Cook in the global tourism/hospitality market for FREE!