Comments (0)
Add to wishlist Delete from wishlist
Cite this document
Summary
1. INTRODUCTION The development in information technology (IT) has modernized the tourism industry, which has brought about advantages and disadvantages among consumers and providers. On the side of travel agencies, the emergence of the internet era has modified the structure of the travel industry, as well as significantly impacted the behavior of consumers (Law, et al., 2004)…
Download full paper File format: .doc, available for editing
HIDE THIS PAPERGRAB THE BEST PAPER94.1% of users find it useful 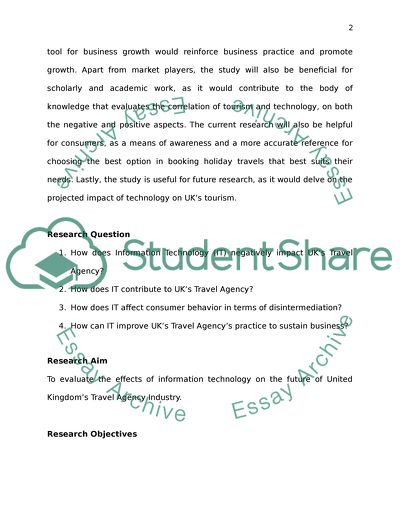 Download file to see previous pages In essence, the future of the travel agency industry in the United Kingdom perceives technology both as danger and useful business prospect, in line with adapting to realities in society. Examining the future of the industry of travel agencies in United Kingdom is valuable for the current players in the market, as it will help improve the current practice and help resolve the declining market. The study aims to evaluate the effects of technology in UK’s travel agency industry, in order to analyze the potential disadvantages it presents and the potential it presents for optimal utilization. Identifying the threats that the information and communication technology era presents is valuable in mitigating its effects to the Travel Agency industry. On the other hand, analyzing technology as a tool for business growth would reinforce business practice and promote growth. Apart from market players, the study will also be beneficial for scholarly and academic work, as it would contribute to the body of knowledge that evaluates the correlation of tourism and technology, on both the negative and positive aspects. The current research will also be helpful for consumers, as a means of awareness and a more accurate reference for choosing the best option in booking holiday travels that best suits their needs. Lastly, the study is useful for future research, as it would delve on the projected impact of technology on UK’s tourism. Research Question 1. How does Information Technology (IT) negatively impact UK’s Travel Agency? 2. How does IT contribute to UK’s Travel Agency? 3. How does IT affect consumer behavior in terms of disintermediation? 4. How can IT improve UK’s Travel Agency’s practice to sustain business? Research Aim To evaluate the effects of information technology on the future of United Kingdom’s Travel Agency Industry. Research Objectives 1. To identify and analyze the threats brought about by IT in UK’s travel agency industry. 2. To determine the opportunities generated by IT in UK’s travel agency industry. 3. To analyze how IT affects consumer behavior on disintermediation. 4. To identify strategies to utilize IT in UK travel agencies to develop business practice. 2. LITERATURE The development of information technology, especially the widespread utilization of the internet medium has changed how the tourism industry functions. It can serve as both a boon and a bane, as it produces both opportunities and difficulties to the process and the stakeholders involved in the field of hospitality and tourism. Since the study focuses on travel agencies, the researcher will delve on the perspective of how travel agents are impacted due to the integration of the new technology to their line of work (Kilipiris and Zardava, 2012). Through the internet, both the behavior of the customers and the structure of the processes have been modified in the sense that it allows travel agents to sustain their visibility in distributing their services. However, as processes become automated, there is a risk that agents would be removed from the process and their roles would be fulfilled by virtual systems. It is important to note that in the event that their roles will be retained in the industry's structure, the utilization of technology would ...Download file to see next pages Read More
Share:
Tags
Cite this document
(“Is there a future in Travel Agency in the UK Dissertation”, n.d.)
Is there a future in Travel Agency in the UK Dissertation. Retrieved from https://studentshare.org/tourism/1401861-is-there-a-future-in-travel-agency-in-the-uk

“Is There a Future in Travel Agency in the UK Dissertation”, n.d. https://studentshare.org/tourism/1401861-is-there-a-future-in-travel-agency-in-the-uk.
Comments (0)
Click to create a comment or rate a document

The term clinical governance gained importance following the high mortality rate for pediatric cardiac surgery at the Bristol Royal Infirmary. The incident led to the formation by the government in 1998 of the Kennedy Commission, which proved a turning point in overhauling the NHS (Kennedy, 2001). The commission’s final report recommended that change “can only be brought about with the willing...
11 Pages (2750 words) Term Paper
sponsored ads
Save Your Time for More Important Things
Let us write or edit the dissertation on your topic "Is there a future in Travel Agency in the UK" with a personal 20% discount.
GRAB THE BEST PAPER

Let us find you another Dissertation on topic Is there a future in Travel Agency in the UK for FREE!