Comments (1)
Add to wishlistDelete from wishlist
Cite this document
Summary
This essay research the perceptions and attitudes of the British customers toward cruise travel in the tourism sector. The recent trends in the industry have stated that the cruise line industry has grown a great deal as compared to it about ten years ago. …
Download full paperFile format: .doc, available for editing
HIDE THIS PAPERGRAB THE BEST PAPER98.9% of users find it useful 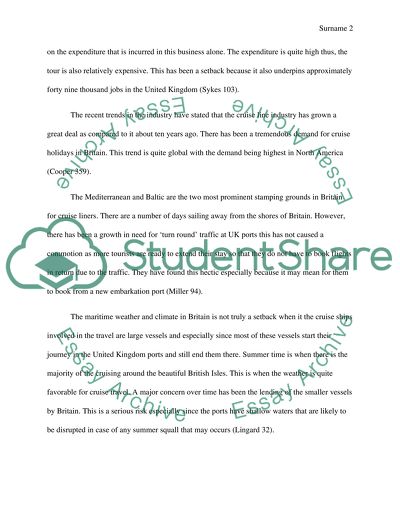 Download file to see previous pages This «Perception and attitude of British customers towards cruise travel» essay, describes the impact of cruise travel on the economy, problems, and prospects, and compares this tourism sector with same one in other countries. The Mediterranean and Baltic are the two most prominent stamping grounds in Britain for cruise liners. There has been a growth in need for ‘turn round’ traffic at UK ports this has not caused a commotion as more tourists are ready to extend their stay so that they do not have to book flights in return due to the traffic. They have found this hectic especially because it may mean for them to book from a new embarkation port (Miller 94).
The maritime weather and climate in Britain is not truly a setback when it the cruise ships involved in the travel are large vessels and especially since most of these vessels start their journey in the United Kingdom ports and still end them there. Summer time is when there is the majority of the cruising around the beautiful British Isles. A major concern over time has been the lending of the smaller vessels by Britain. This is a serious risk especially since the ports have shallow waters that are likely to be disrupted in case of any summer squall that may occur (Lingard 32).
The passenger embarkations at UK that are the majority are mainly the residents of Britain themselves. The overseas guests that take the cruise ships from the ports enjoy an incomparable experience with access for just about every part they may wish to travel and tour.
For fantastic pre and post cruise travel extension, London is close to Dover, Southampton and not forgetting Harwich. This is notable because it has played a vital role in job creations and generation of income for some people in the region. This works across a great spectrum of businesses that tourism related that not many would notice was a result of the cruise ship travel in the region (Markham 45). The weakness of sterling pound provides a greater incentive for cruise lines to consider London as an extension destination due to the position of the city (Moutinho 175). Since this is a condensed island with convenient transport infrastructure and a number of ...Download file to see next pagesRead More
Share:
Tags
Cite this document
(“Perception and attitude of British customers towards cruise travel Essay”, n.d.)
Retrieved from https://studentshare.org/tourism/1397761-perception-and-attitude-of-british-customers

“Perception and Attitude of British Customers towards Cruise Travel Essay”, n.d. https://studentshare.org/tourism/1397761-perception-and-attitude-of-british-customers.
Comments (1)
Click to create a comment or rate a document

bw
bwisoky added comment 2 years ago
Student rated this paper as
I never thought 3250 words essay could be written in such a free manner. I loved the content of this essay. Will definitely use it for my own work!

Unfortunately the United States into a new debt in the Second World War. In 1941, the gross domestic product was 45 percent; it rose up to 119 percent in 1946 probably at the end of t...
6 Pages(1500 words)Assignment
sponsored ads
Save Your Time for More Important Things
Let us write or edit the essay on your topic "Perception and attitude of British customers towards cruise travel" with a personal 20% discount.
GRAB THE BEST PAPER

Let us find you another Essay on topic Perception and attitude of British customers towards cruise travel for FREE!