Comments (0)
Add to wishlist Delete from wishlist
Cite this document
Summary
This paper will let you know about the growth of the tourist industry, characteristics of eco-tourism, effects and considerations of eco-tourism, managing demand for eco-tourism in China and France, and about general Management Strategies in eco-tourism as a dynamic business sector…
Download full paper File format: .doc, available for editing
HIDE THIS PAPERGRAB THE BEST PAPER95% of users find it useful 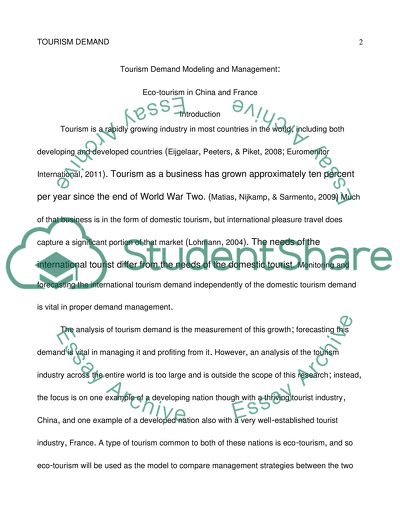 Extract of sample "Eco-tourism in China and France"

Download file to see previous pages Tourism is a rapidly growing industry in most countries in the world, including both developing and developed countries (Eijgelaar, Peeters, & Piket, 2008; Euromonitor International, 2011). Tourism as a business has grown approximately ten percent per year since the end of World War Two. (Matias, Nijkamp, & Sarmento, 2009) Much of that business is in the form of domestic tourism, but international pleasure travel does capture a significant portion of that market (Lohmann, 2004). The needs of the international tourist differ from the needs of the domestic tourist. Monitoring and forecasting the international tourism demand independently of the domestic tourism demand is vital in proper demand management.
The analysis of tourism demand is the measurement of this growth; forecasting this demand is vital in managing it and profiting from it. However, an analysis of the tourism industry across the entire world is too large and is outside the scope of this research; instead, the focus is on one example of a developing nation though with a thriving tourist industry, China, and one example of a developed nation also with a very well-established tourist industry, France. A type of tourism common to both of these nations is eco-tourism, and so eco-tourism will be used as the model to compare management strategies between the two nations.
Characteristics and Modeling of Tourism Demand
Tourism demand can be measured in a variety of ways. The most commonly used benchmark for tourism demand is the number of tourists arriving in the country or to the location Chan, Lim, & McAleer, 2005). Another method, which is generally used for economic models, is the income receipt from those tourists. A combination of these measurements is considered best to get a true picture of the demand for tourism infrastructure: if there is a situation where a large number of tourists are arriving, but their expenditure while traveling is low, it would be more sensible to focus on budget vacations than on five-star facilities, for example. The two issues at hand, the number of arrivals and the money being spent, are separate; good modeling will involve consideration of them both as individual problems and as a a combination. A wide variety of models exist for forecasting and analyzing the demand of tourism and new techniques are constantly being introduced. No single modeling technique has been found to be the most accurate overall; the best choice of modeling technique seems to depend significantly on the situation (Song & Li, 2008). For example, travel motivation theory suggest that the reasoning behind the trip is the most important in predicting the demand for tourism to a specific location (Goh, Law, & Mok, 2008). Dynamic destination image indexes (DDII) are collections of news stories about a destination that can affect a consumer's choice of vacation destination, by adding a line of reasoning about recent events to the consumer's decision-making process (Stepchenkova & Eales, 2011). Using the DDII can be more helpful to managing demand in a nation that is frequently shown on the international news, but less so in a case where fewer people are aware of current events at that location. Scenario planning is used to predict events, both positive and adverse, that could effect tourism demand. Ideally, scenario planning will also forecast the magnitude of this effect. ...Download file to see next pages Read More
Share:
Tags
Cite this document
(“Eco-tourism in China and France Research Paper Example | Topics and Well Written Essays - 3750 words”, n.d.)
Retrieved de https://studentshare.org/tourism/1390979-tourism-demand

CHECK THESE SAMPLES OF Eco-tourism in China and France

The pricing system, common law and property rights in Britain and Holland were well defined; in China, too the private landholding property rights including leasehold and freehold rights became the basis to give the economy a boost.
In fact, China experienced a revolution in agriculture; the geographical expansion of China mainland was possible due to the peasants who were willing to move to new places as China took hold of further land. In return, the state-supported such peasants with financial and material aid. The state’s main revenue was generated through a tax imposed on peasants. It also became the single most source of employment in China. The economy thrived due to agricultural dominance. Britain too had agricu...
6 Pages (1500 words) Assignment

The Party’s domination over the media has meant that the news media is required to accept Party ideology as its own, propagate Party programs and policies and accept the Party’s leadership. (Zhao, 1998:19). The Party closely surveys media content and media mentoring is performed by special teams of veteran Party workers (Zhao, 1998: 21). The Chinese Community Party views the role of the media in the political process as being based on its theory of political communication which in turn is derived from its basic philosophy of the mass line spelling out three distinct power levels, the Party Cadres, ordinary Party workers and the masses. While the people are the basis for policymaking, they do not participate in decision...
6 Pages (1500 words) Article

Some countries have pushed for an international consensus on issues of concern to all. France, which has suffered severely from the crisis, with an economic contraction and rising unemployment, has tried stand in opposition to the UK and the United States both of which believe minor financial regulations can alter and improve the situation—France would like to see more wide-ranging reforms accomplished through the increased unification of Europe. Efforts to deal with the crisis have led the French government to seek out more partners in Europe and try to push Europe wide reforms and a sort of European (as opposed to American) new capitalism. The government of Sarkozy has criticized British tax cuts and suggested the key to g...
8 Pages (2000 words) Coursework

In th...
8 Pages (2000 words) Case Study
sponsored ads
Save Your Time for More Important Things
Let us write or edit the research paper on your topic "Eco-tourism in China and France" with a personal 20% discount.
GRAB THE BEST PAPER

Let us find you another Research Paper on topic Eco-tourism in China and France for FREE!