Comments (0)
Add to wishlistDelete from wishlist
Cite this document
Summary
The paper "Justification Behind the New FAI Club Licensing System" states that the FAI Eircom Licensing System is a policy that must have been carefully studied out of the experiences of the past and was formed as national guidelines of the football sports of Ireland. …
Download full paperFile format: .doc, available for editing
HIDE THIS PAPERGRAB THE BEST PAPER95.7% of users find it useful 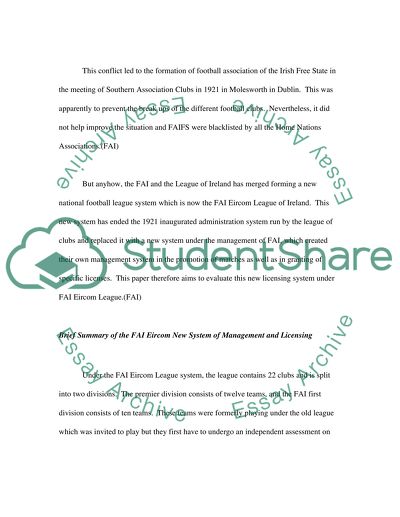 Download file to see previous pages The history cited the growth of the football clubs, among them was the Ulster based Protestant Clubs which later found to have clamored especially when selecting sides for international matches. This had led to the rising of nationalism in 1916 that had pushed the Southern affiliates to take an aggressive approach in their dealings with IFA. (FAI) During this time also, there was always a threat of breakaways of member clubs which created a crisis within the IFA interfere in the final game of two teams in favor of another football club.
This conflict led to the formation of the football association of the Irish Free State in the meeting of Southern Association Clubs in 1921 in Molesworth in Dublin. This was apparently to prevent the breakups of the different football clubs. Nevertheless, it did not help improve the situation and FAIFS were blacklisted by all the Home Nations Associations. (FAI)
But anyhow, the FAI and the League of Ireland has merged forming a new national football league system which is now the FAI Eircom League of Ireland. This new system has ended the 1921 inaugurated administration system run by the league of clubs and replaced it with a new system under the management of FAI, which created their own management system in the promotion of matches as well as in granting of specific licenses. This paper, therefore, aims to evaluate this new licensing system under the FAI Eircom League. (FAI)
Brief Summary of the FAI Eircom New System of Management and Licensing
Under the FAI Eircom League system, the league contains 22 clubs and is split into two divisions. The premier division consists of twelve teams, and the FAI first division consists of ten teams. These teams were formerly playing under the old league which was invited to play but they first have to undergo an independent assessment on the following: criteria, the scoring and the detailed breakdown notes, as discussed in the Wikipedia.
The criteria involve the 2002/03 - 2005 seasons, the 2006 seasons, infrastructure, governance and finance, sustainability, benchmarking, youth and development, and strategic planning. Target markets which items with corresponding scores of 30%, 20%, 10%, 15%, 15%, 10% respectively.
Those first twelve teams who got high percentages on scoring and on the detailed analysis for each of the criteria attain an A license and therefore will be in the premier division. While the remainder gets the B license and will compose the FAI First Division. As the FAI Eircom League Independent Assessment reports, "the 21 clubs which took part in the process were ranked on the basis of points scored as a result of their achievements over the past five seasons on the pitch and they measured up against specific criteria."(Wikipedia)
The Licensing system
Participation in the FAI Eircom League was subject to "granting of specific participation licenses," as emphasized in the rules of licensing of FAI. Those who attain the A license participate in premiere division, while those who get the B license play in FAI first division. According to UEFA, this license to participation is "an attempt to maintain a consistent standard of quality as well as promote development."  ...Download file to see next pagesRead More
Share:
Tags
Cite this document
(“Sports Economics Case Study Example | Topics and Well Written Essays - 1500 words”, n.d.)
Sports Economics Case Study Example | Topics and Well Written Essays - 1500 words. Retrieved from https://studentshare.org/sports-and-recreation/1507609-sports-economics
(Sports Economics Case Study Example | Topics and Well Written Essays - 1500 Words)
Sports Economics Case Study Example | Topics and Well Written Essays - 1500 Words. https://studentshare.org/sports-and-recreation/1507609-sports-economics.
“Sports Economics Case Study Example | Topics and Well Written Essays - 1500 Words”, n.d. https://studentshare.org/sports-and-recreation/1507609-sports-economics.
Comments (0)
Click to create a comment or rate a document

Sports Economics: The Impact of Sports on the Economics of a Community

8 Pages(2000 words)Thesis
sponsored ads
Save Your Time for More Important Things
Let us write or edit the case study on your topic "Justification Behind the New FAI Club Licensing System" with a personal 20% discount.
GRAB THE BEST PAPER

Let us find you another Case Study on topic Justification Behind the New FAI Club Licensing System for FREE!