Comments (0)
Add to wishlistDelete from wishlist
Cite this document
Summary
This essay "Youth justice" analyses several Australian social organizations with a primary focus other than youth justice were discussed in case studies examining their effect on criminality arising from the pursuit of their primary goals. …
Download full paperFile format: .doc, available for editing
HIDE THIS PAPERGRAB THE BEST PAPER97.5% of users find it useful 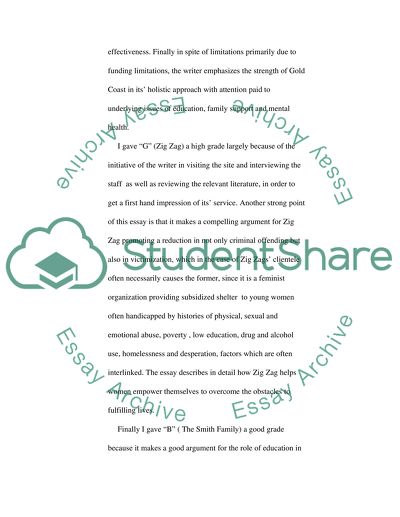 ﻿Youth justice
Introduction
Several Australian social organizations with a primary focus other than youth justice were discussed in case studies examining their effect on criminality arising from pursuit of their primary goals. The object was for the student to select 3 of these and grade them as a tutor would. My selections and grades are as follows.
1) “I” (Gold Coast Drug Council Inc.) 80%
2) “G” (Zig Zag) 75%
3) “B” (The Smith Family) 70%
Grading Rationale
I was very impressed with “I” (Gold Coast) because it not only provided theoretical arguments for the success of its’ programs, but also statistical proof such as lower offending rates for criminals graduating from the program compared with those who did not . The essay starts out by clearly establishing through the referenced literature the link between drug addiction and criminal offending. It then moves seamlessly into a discussion of the history of Gold Coast and its’ various programs for both criminal offenders and non offenders and the distinctions between them. Quotes from satisfied consumers also document the programs’ effectiveness. Finally in spite of limitations primarily due to funding limitations, the writer emphasizes the strength of Gold Coast in its’ holistic approach with attention paid to underlying issues of education, family support and mental health.
I gave “G” (Zig Zag) a high grade largely because of the initiative of the writer in visiting the site and interviewing the staff as well as reviewing the relevant literature, in order to get a first hand impression of its’ service. Another strong point of this essay is that it makes a compelling argument for Zig Zag promoting a reduction in not only criminal offending but also in victimization, which in the case of Zig Zags’ clientele often necessarily causes the former, since it is a feminist organization providing subsidized shelter to young women often handicapped by histories of physical, sexual and emotional abuse, poverty , low education, drug and alcohol use, homelessness and desperation, factors which are often interlinked. The essay describes in detail how Zig Zag helps women empower themselves to overcome the obstacles to fulfilling lives.
Finally I gave “B” ( The Smith Family) a good grade because it makes a good argument for the role of education in lessening temptations for criminal activity. The Smith Family provides continuing scholarships for underprivileged children as long as certain standards of attendance and grades are met. The author emphasizes this by referring to studies which show a link between criminality and low education levels Also he shows through the literature linkages between poor parenting skills and disadvantaged immigrants and criminality and how these problems are addressed in The Smith Family programs. Read More
Share:
Tags
Cite this document
(“Youth justice Essay Example | Topics and Well Written Essays - 500 words”, n.d.)
Retrieved de https://studentshare.org/sociology/1581469-youth-justice-case-study-exercise

CHECK THESE SAMPLES OF Youth justice

...? Youth Justice Task The youthful populace is an exceedingly resourceful component in the societal context. Therefore, people ought to make certain that the youth have the capacity to grow. Therefore, there are numerous agencies concerned with youth dealings. YMCA Australia is one of those agencies ensuring that there is no refutation of youth’s affairs. YMCA Australia concerns itself with the underprivileged populace. Among the populace are young people whom it ensures their nurturing. Below are services of the agency, youth crime, strengths and weaknesses of YMCA Australia, offer discussions about services. YMCA works...
7 Pages(1750 words)Essay

..., most of them indulge in drugs – something that highly contributes to delinquent behavior. An Introduction of Key Research Questions In regard to the above-mentioned issues, it is apparent that there is a need to have the issue of anti-social behaviors among young people addressed comprehensively (Gaines 28). The current research aims at presenting theoretical and comparative measures to not only reform the already existing youth justice system but also to provide a framework that can help reduce and prevent cases of anti-social behaviors among young people. In this scope, the hypothesis of the research argues that if community based programs that deal with child rearing can be introduced, the rate of...
4 Pages(1000 words)Research Paper

...? UK Youth Justice System and Social exclusion is a systematic process through which the individuals, a community or people are blocked from accessing their rights, resources and opportunities (Agulnik, 2002). Common resources and opportunities foster social integration, and should be made available always to all members of the society without discrimination. The resources can either be healthcare, education, housing and even employment services (Pierson, 2009). There are many grounds on which a person or a group can be socially excluded including individual’s educational status, childhood relationships, social class and even age (Agulnik, 2002). Social exclusion concept applies to the minority members of...
5 Pages(1250 words)Essay

Key characteristics of the Australian media

...deal with the youth justice need to have sound knowledge and ethical practical orientation in order to ensure that youth are properly rehabilitated and brought back to the society as constructive and more productive members of the society. However, it also must be noted that Youth justice is currently being viewed in different perspectives than it used to be. Many view the current reforms in youth justice due to modernization of the governments and political systems to accommodate the issues like young justice however there is also another dimension to it also as the emergence of private practice into...
5 Pages(1250 words)Essay

...1 THE YOUTH JUSTICE SYSTEM AND TWO SERVICES IT PROVIDES Youth crime is one problem that each nation must deal with head on. It cannot be dealt with, with a mere shrug or let that problem be swept under the rug because crimes committed by youths have long-standing repercussions. Each report of youth crime sends shock waves to each society as nations, parents, the church begin to question whether the moral values they are imparting to their citizens especially the children are defective or insufficient. Consciences are pricked whenever today's youths show increasing propensity for violence and criminal behaviour. Surely the aberrant youths cannot be prosecuted the same way as adults as there is a different degree of criminality... decided...
8 Pages(2000 words)Essay

Youth Justice in the UK

...﻿Youth Justice in the UK Youth justice in the UK had been steadily evolving for sometime now. According to a study commissioned by the Prince’s Trust, youth exclusion in unemployment costs £90m a week, youth crime, more than £1bn a year and educational underachievement £18bn, Young People now, 30th April 2007. Youth justice is a difficult and controversial area of involvement at various stages by different people. Parents, carers, families and youth themselves involve at different stages producing a vast amount of uncertainty in the process. Dealing with youth...
3 Pages(750 words)Essay

...in morality, and they have raised their children in such kind of a belief. When moral values are imparted in a child at a young age, then it will be difficult to remove such values from a child when he or she is an adult. Motivation from teachers and other role models can also make these people not engage in crime (Gregoriou, 2012). However, young people who engage in crime and are not socially excluded might be doing it for fun, or they lacked some moral training when they were children. On this basis, they were exposed to violence and a world of crime. Currently, the government of UK uses the 2008 act on criminal justice and immigration. Section 1(3) of the act establishes the Youth...
5 Pages(1250 words)Essay
sponsored ads
Save Your Time for More Important Things
Let us write or edit the essay on your topic "Youth justice" with a personal 20% discount.
GRAB THE BEST PAPER

Let us find you another Essay on topic Youth justice for FREE!