Own Experiences of Frederick Douglass as a Slave - Literature review Example

Comments (0)
Add to wishlistDelete from wishlist
Cite this document
Summary
The paper "Own Experiences of Frederick Douglass as a Slave" discusses that President Andrew Jackson completely framed all his laws, not in a way of fighting paternalism but rather he himself used paternalism to achieve his goals. His paternalist views were obvious from his thoughts…
Download full paperFile format: .doc, available for editing
HIDE THIS PAPERGRAB THE BEST PAPER91.9% of users find it useful 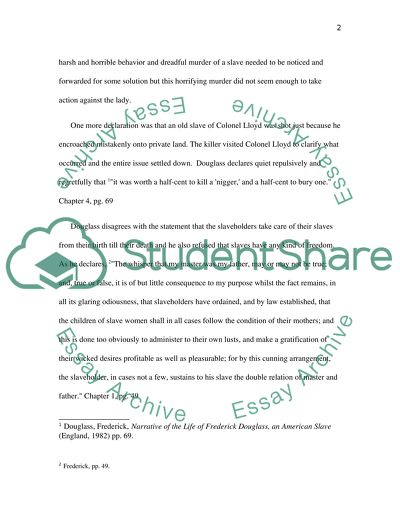 Extract of sample "Own Experiences of Frederick Douglass as a Slave"

Download file to see previous pages The official system was also not a choice for slaves to rely on for aid as they had no official rights.
Douglass started his story when he was a slave. He declares many horrible acts committed by the slaveholders in Talbot County (his birthplace). Douglass declares that in Talbot County slaying or punishing a slave is not considered as unusual or offensive. He further explains the story of a slaveholder who kills two of his slaves and despite his declaration of the two murders neither anyone put him in jail, nor taken any action against him. Douglass gave some more examples of such horrible deaths of slaves for their minor mistakes. He stated the story of his own cousin who was beaten harshly by a lady with an oak stick just because he fell asleep while watching the lady's child. Such harsh and horrible behavior and dreadful murder of a slave needed to be noticed and forwarded for some solution but this horrifying murder did not seem enough to take action against the lady.
One more declaration was that an old slave of Colonel Lloyd was shot just because he encroached mistakenly onto private land. The killer visited Colonel Lloyd to clarify what occurred and the entire issue settled down. Douglass declares quite repulsively and regretfully that 1" it was worth a half-cent to kill a 'nigger,' and a half-cent to bury one." Chapter 4, pg. 69
Douglass disagrees with the statement that the slaveholders take care of their slaves from their birth till their death and he also refused that slaves have any kind of freedom. As he declares, 2" The whisper that my master was my father, may or may not be true; and, true or false, it is of but little consequence to my purpose whilst the fact remains, in all its glaring odiousness, that slaveholders have ordained, and by law established, that the children of slave women shall in all cases follow the condition of their mothers; and this is done too obviously to administer to their own lusts and make a gratification of their wicked desires profitable as well as pleasurable; for by this cunning arrangement, the slaveholder, in cases, not a few, sustains to his slave the double relation of master and father." Chapter 1, pg. 49
Douglass started the whole period of his slavery in pain and did not like the rules that were just in favor of the slaveholders. He wanted to escape from this disgraceful and terrible County where the slaves were not even considered as human beings. He hated the behaviors of slaveholders with their slaves. The statement of Douglass further points toward the cruelty and fear of the white men (slaveholders).
3"A single word from the white men was enough-against all our wishes, prayers, and entreaties-to sunder forever the dearest friends, dearest kindred, and strongest ties known to human beings." Chapter 8, pg. 90
To support his argument he gave many examples of murders committed by the masters and their cruelty even as a result of the minor mistakes. Colonel Lloyd had a lot of slaves that he does not recognize them all and they do not all recognize him. It is stated that one day as Colonel Lloyd was on a trip; he meets up a slave and inquires him about his master.
As the slave answers that he belongs to Colonel Lloyd, he inquires the slave if his master takes care of him.  ...Download file to see next pagesRead More
Share:
Tags
Cite this document
(Slavery and Paternalism Literature review Example | Topics and Well Written Essays - 1750 words, n.d.)
Slavery and Paternalism Literature review Example | Topics and Well Written Essays - 1750 words. https://studentshare.org/sociology/1505537-slavery-and-paternalism
(Slavery and Paternalism Literature Review Example | Topics and Well Written Essays - 1750 Words)
Slavery and Paternalism Literature Review Example | Topics and Well Written Essays - 1750 Words. https://studentshare.org/sociology/1505537-slavery-and-paternalism.
“Slavery and Paternalism Literature Review Example | Topics and Well Written Essays - 1750 Words”. https://studentshare.org/sociology/1505537-slavery-and-paternalism.
Comments (0)
Click to create a comment or rate a document

The Slavery during the Times of the Roman Republic

Slavery Instead of the Promised Wonderful Life

6 Pages(1500 words)Essay
sponsored ads
Save Your Time for More Important Things
Let us write or edit the literature review on your topic "Own Experiences of Frederick Douglass as a Slave" with a personal 20% discount.
GRAB THE BEST PAPER

Let us find you another Literature review on topic Own Experiences of Frederick Douglass as a Slave for FREE!