Comments (0)
Add to wishlistDelete from wishlist
Cite this document
Summary
In the essay “Personal Responsibility and Individual Accountability,” the author discusses the case of Alan’s story. The author had been reckless in the past but now he has taken a leaf out of Alan’s book. He has taught himself that it is good to be persistent within a task…
Download full paperFile format: .doc, available for editing
HIDE THIS PAPERGRAB THE BEST PAPER97.2% of users find it useful 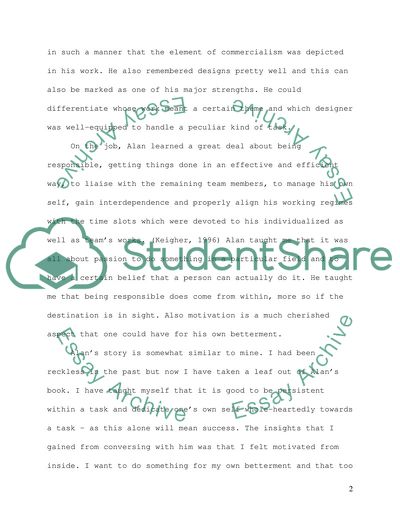 Interview Essay I recognize Alan from college. He earned his degree in Advertising only recently. He is around 26 years old, a couple of years older than me. He went to St. Thomas Aquinas College in Riverdale, West of North County. He was always inclined to make it big creatively and I believe the path that he has chosen for his future is one that will take him there smoothly. He will be a success on the creative tangent of advertising and I believe he knows well what he is capable of.
Alan’s immediate challenges after obtaining the Advertising degree were in securing a good job for his own self. He dropped his resume here and there and finally got a call from a reputed advertising agency in town. He was interviewed a couple of times and finally got recruited at a good salary. He was appointed as the Creative Team Member and thus his responsibility was to understand the creative elements within the campaigns and assist the remaining team members as per the ‘consistency’ theme within those campaigns. (Moses, 2000)
Alan’s strengths were his ability to recognize the difference between the aesthetically sound designs and the ones which could not propagate much variation within the consumerism avenues. He knew what will sell and hence advocated his designs in such a manner that the element of commercialism was depicted in his work. He also remembered designs pretty well and this can also be marked as one of his major strengths. He could differentiate whose work meant a certain theme and which designer was well-equipped to handle a peculiar kind of task.
On the job, Alan learned a great deal about being responsible, getting things done in an effective and efficient way, to liaise with the remaining team members, to manage his own self, gain interdependence and properly align his working regimes with the time slots which were devoted to his individualized as well as team’s works. (Keigher, 1996) Alan taught me that it was all about passion to do something in a particular field and to have a certain belief that a person can actually do it. He taught me that being responsible does come from within, more so if the destination is in sight. Also motivation is a much cherished aspect that one could have for his own betterment.
Alan’s story is somewhat similar to mine. I had been reckless in the past but now I have taken a leaf out of Alan’s book. I have taught myself that it is good to be persistent within a task and dedicate one’s own self whole-heartedly towards a task – as this alone will mean success. The insights that I gained from conversing with him was that I felt motivated from inside. I want to do something for my own betterment and that too with full vigor and positive energy by my side. I felt I could do it and this was indeed what I had needed from day one. From this interview, I believe I can become an even successful student because Alan has self-confidence in his abilities and he knows what he is doing. Perhaps I need to anchor my ship in a proper way and find a specific destination for my own self too.
Works Cited
Keigher, Sharon. Speaking of Personal Responsibility and Individual Accountability. Health and Social Work, Vol. 21, 1996
Moses, Barbara. 6 Degrees of Motivation. Black Enterprise, Vol. 31, November 2000
Word Count: 545 Read More
Share:
Tags
Cite this document
(“Personal Responsibility and Individual Accountability Essay - 2”, n.d.)
Personal Responsibility and Individual Accountability Essay - 2. Retrieved from https://studentshare.org/social-science/1719261-interview-essay

CHECK THESE SAMPLES OF Personal Responsibility and Individual Accountability

... al, 2009). Personal responsibility refers to the sense of realizing, recognizing, accepting and fulfilling the responsibilities for one's individual acts, thoughts, behaviours and responses. Personal responsibility is to comply with the obligations and personal duties that are expected from a person while living in a particular society and environment. When an individual has the sense of understanding his responsibilities and duties he can set the directions for his actions because he becomes aware of the potential consequences and effects of his acts upon his personality as well as the people and surrounding environment. When people gain complete understanding and awareness of their responsibilities and obligations they are able to make...
6 Pages(1500 words)Essay

...?Personal responsibility is a willingness to acknowledge, respect the important standards set for individual behavior and make a deliberateeffort to abide and live by them. This means that when the student does not meet their own goals, they shoulder the blame and not attempt to lay it on other people or external factors. Personal responsibility entails understanding the choices one makes willing to accept the consequences of these choices in view of how they will affect other people (Mergler et al, 2008). Consider two students leaving an exam room; A says “I think I failed that paper, but it is not my fault that teacher never taught us any of the real stuff that was tested in the exam but only used obscure examples, which made no sense...
5 Pages(1250 words)Essay

.... On the other hand, the government and members of the public demand that businesses take action to minimize the negative effects of their production activities on the environment. For example, the by instituting carbon accounting laws and instituting regulations regarding the control of environmental pollution by individuals and organizations, the government calls for greater accountability to the environment. The parties of which accountability is demanded, however, often find the responsibility taxing as it is associated with certain costs. It has been noted by several quarters that the future of the planet and generations to come depend on how accountable the present generation is to the environment. With this being the case, the issue...
11 Pages(2750 words)Research Paper

This is quite evident in George Orwell's short story, A Hanging (first published in 1931 and reprinted in James and Merickel, 2001), the author describes a European's experience of watching a Hindu man's execution in Burma. As he acknowledges, he has never known what it feels like to destroy a perfectly healthy human body. Throughout the story, there is no inkling that the executioners know what the prisoner is accused of or why he is being hanged. It is simply the Europeans' duty to carry out orders in the name of the law. They go about doing their duty mechanically and go for their drink after the execution is over, quite oblivious of what the dead man could have felt like in his last minutes. The executioner, in his role as th...
5 Pages(1250 words)Essay

...﻿ Personal Responsibility to Nature Living in a country where energy is scare and thus in high demand, oil becomes one of the most ludicrous commodities desired by many—not only by oil companies, but also by peoples in different sectors who can further their self-interests through supporting more oil drilling. The recent oil spill at Gulf of Mexico, however, arouses public awareness on to what extent should we exploit natural resources without causing great environmental and economic harm to the country. Also, it raises the question on how we can individually and collectively pose a positive change to the current situation where the struggle between the natural environment and the commercial sector leads to irreversible harm to nature...
4 Pages(1000 words)Essay

Free Will and Personal Responsibility

To prove the superman theory, they murdered a fourteen year-old boy named Bobby Franks. Also, they committed the murder of Franks to prove that they were intelligent enough to outsmart the police and create the perfect crime.
However, because of the negligence of leaving behind Leopold's glasses near the dead body, the police was able to prove that they were the perpetrator of the crime. Ultimately, they had been convicted for the crime that they committed.
The defense counsel of Leopold and Loeb presented a closing argument justifying the murder committed against Franks. The main argument of the closing speech is that Leopold and Loeb's act of murdering Franks was a necessary consequence of their background, their upbrin...
7 Pages(1750 words)Case Study

Factors such as lack of education, insufficient access to medical facilities, social background, income level, and employment condition tend to have a significant impact on the promotion of unhealthy activities on the part of people. Understandably, these factors driving human behaviour are beyond the control of people and hence, individuals cannot be held responsible for ill health.
This paper provides an insightful study on the causes of ill health in the society as pertinent to environmental and structural factors along with the elaboration the notion of individual responsibility as emphasised as the sole cause of growing ill health in the society. The discussion focuses on the extent to which the overemphasis on individua...
10 Pages(2500 words)Essay

...Individual Personal Reflection Individual Personal Reflection Critical thinking refers to the skillful and active process of conceptualization, application, and analysis of information that leads to a certain course of action or belief. This information could be obtained through observation, experience, internalization, or reasoning (Hamby, 2007). It involves a high level of reasoning in the most fair-minded approach and depends on the motivation behind it. It is wholly dependent on the intellectual tools, which include; purpose, ideas, support, assumptions and biases, conclusions, point of view and analysis. I have learnt that Critical thinking, among other things, makes one think rationally and with more clarity irrespective...
2 Pages(500 words)Assignment

... Organization, Timing and Personal Accountability First, I would like to apologize for my unacceptable behavior and promise that I will take this course seriously and I will not repeat this mistake again. I understand the consequences of my ignorance and I appreciate that you have given me a second chance. I forgot to turn in my syllabus contract since I had a lot in my mind. I also thought that due to the simplicity of the exercise I would do it any time. As such, I did not prioritize due to the simplicity of the exercise. Again, accept my sincere apologies and promise I will henceforth take this course very seriously. Lack of prioritizing will affect my career in business since I will not know when and where to concentrate my efforts...
5 Pages(1250 words)Personal Statement

...﻿1. Introduction The concept of ethics, social responsibility and accountability in business is inherently complex and has fuelled polarised debate as to the parameters of its role in practice. Furthermore, this has been compounded by the integration of the globalisation phenomenon into international business; with the increased movement of capital, commodities, cultural imaginations and practices1. A concomitant result of this has been the proliferation of international expansion opportunities for businesses, which has brought the issue of ethics and corporate responsibility to the fore. To this end, some commentators argue that governments should discourage trade with countries having bad human rights records. Indeed, in the British...
19 Pages(4750 words)Coursework
sponsored ads
Save Your Time for More Important Things
Let us write or edit the essay on your topic "Personal Responsibility and Individual Accountability" with a personal 20% discount.
GRAB THE BEST PAPER

Let us find you another Essay on topic Personal Responsibility and Individual Accountability for FREE!