Comments (0)
Add to wishlistDelete from wishlist
Cite this document
Summary
The paper "Female Serial Killers" describes that research into the motives why women turn to serial killing remains insufficient to give an adequate portrait of potential risks or to provide adequate treatment of perpetrators once they’ve been apprehended…
Download full paperFile format: .doc, available for editing
HIDE THIS PAPERGRAB THE BEST PAPER96.2% of users find it useful 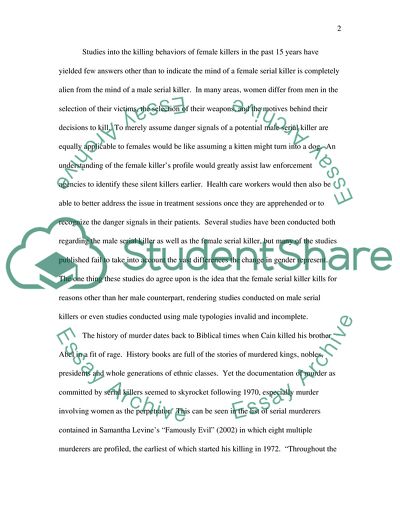 This research essay will make an earnest attempt to find out what poignantly contributed to the onset of this intricate distorted personality and their violent demeanour which is far more many-sided. Introduction In the modern forensic psychology, serial murders appear to have assumed a pivotal place. According to Burgess, Douglas & Ressler (1983), a serial murder is one who has killed at least three or more victims with a cooling -off period in-between each murder. A serial killer does not have any past connection with the victim and murder seems to be random or unconnected. Further, the murder is mainly on the psychological background or for sex abuse and not for any monetary benefits. Serial killers’ victims will be adolescent...
12 Pages(3000 words)Essay

The essay "Serial Killers" will provide that murders kill their victims and then have a period of break which can extend sometimes to long years. A killer may only take one life and end up committing suicide, for instance, a spree killer. Serial killers kill sometimes may be for fun, they have an urge that compels them to kill. Most of them are sick and are motivated by their sexual gratification sometimes even if there is a lack of an assault sexually; they end up on the thrill. A killer may embark on murder assault on the victim in a short span of time and maybe in many locations. The major difference between a serial killer and a spree killer may be the lack of the cooling period, the period between one successful murder and th...
7 Pages(1750 words)Essay

...? May 20 Serial Killers Serial killers(s) is a person or individual who murders a number of people usually two or for some time, not less than a week to gain psychological satisfaction. The reasons for such murders to occur vary depending on the motive of the serial killer. Serial killers are thought to be undergoing some form of psychological and metal disturbance; hence, they obtain pleasure from the murders they commit. The main cause of mental or psychological disturbance for these offenders is normally traced back to their childhood growth. Moreover, physical or sexual abuse on them by parents or some members of society, like suffering in the hands of peers may cause them physical and mental pain forcing them to seek revenge...
3 Pages(750 words)Essay

...are those who kill by impulse but proceed to hide the bodies and clear all evidence that would expose them. This kind of murderers may be easier to trace down since they panic and leave many hints behind while trying to hide (Scott, 2012). Study has shown that majority of the serial killers are male. Their victims are mostly females that they idolize or family members they loath. Female serial killers are very rare and the few who are caught only kill for their materialistic gain. They kill wealthy men and steal their money. Most male serial killers use torturing methods to kill their victims. They may...
5 Pages(1250 words)Research Paper

This paper tells that sometimes, the murderers have specific targets; they choose people from certain color, race, ethnicity or religion. All such murders have a specific name to them. They are not similar to the mass murderers; mass murders are usually committed by a group of people who function together as a team. They have motives that are defined amongst them. Serial killers usually work alone and they have some particular reason to commit murders. They pick up murder victims through similarity in the traits, gender, and characteristics. These people even have a cooling off period, during which they do not commit any murder and go about their normal routine as if nothing has happened; they behave lik...

...of female serial killers are either too young or too old (Schurman- Kauflin, 2000, p. 17). This shows that they choose the most vulnerable and helpless people among the population as their victims. Hence, it is highly important to conduct more research studies on female killers as it can help in developing profiling on them and help the police to catch them. Differences Researches on female serial murderers have found that there are some distinct differences in male and female serial killers (Hilton, 1997, p.65). Research by Keeney and Heide (1994) has revealed that...
4 Pages(1000 words)Essay

...? Serial Killers Introduction Serial killers often have a common and definitive personality profile. It is worth mentioning each serial killer have his own intention and motive for killing. It can be argued that despite differences in their motive and agenda for killing, serial killers share few common traits. Few behaviors can be identified in their childhood such as abusing animals and setting fires among others. As the serial killers grow, there exists certain danger signs which include desire to live alone, inability to perform well in school and family circumstances which ultimately contributes towards the future aggression in them. A Serial Killer is usually considered to be a person found killing two or more person within a series...
9 Pages(2250 words)Essay

The paper details a literature review of serial killers and an overview on prevention and control strategies for the problem of serial killers. The paper recognizes the centrality of the premise that a serial murderers acts mirror a psychological problem from which patterns can be derived. The psychological assessment of crime scene is pertinent to the development of a profile. The paper concludes the dependence on narrow definitions; creation of typologies based on the outlined definitions, and questionable data gathering may impede or distort the analysis of serial killers. Part I Introduction Empirical evidence indicates that roughly 20% of the murders within the United States yearly may be perpetrated by serial killers; never...
10 Pages(2500 words)Research Paper

There she changed his name to Theodore Robert Nelson. After marrying a man in the service named Johnnie Culpepper Bundy, Ted became Ted Bundy (Lohr, 2002). Schum (2006) explains:
Louise Cowell and Johnnie Bundy had four more children Ted was emotionally detached from his step-father. He generally preferred to be alone and had a strong inability to be social with other people. Shy, insecure, and uncomfortable Bundy was teased quite often.
Ted never created a bond with his mother. He must have seen that maternal bond with his younger four siblings. Ted must have been jealous. It would have been natural for Ted to feel that something was wrong with him. The thought of what's wrong with me? must have run through his head.
sponsored ads
Save Your Time for More Important Things
Let us write or edit the coursework on your topic "Female Serial Killers" with a personal 20% discount.
GRAB THE BEST PAPER

Let us find you another Coursework on topic Female Serial Killers for FREE!