Comments (0)
Add to wishlistDelete from wishlist
Cite this document
Summary
On 12TH/8/2014, New York Post published a story titled ‘The War Obama Never Ended’ to bring highlight the controversies surrounding the fulfillment of promises made by Senator Obama in 2011 when he was campaigning for presidential election against his rival John McCain. In…
Download full paperFile format: .doc, available for editing
HIDE THIS PAPERGRAB THE BEST PAPER96.9% of users find it useful 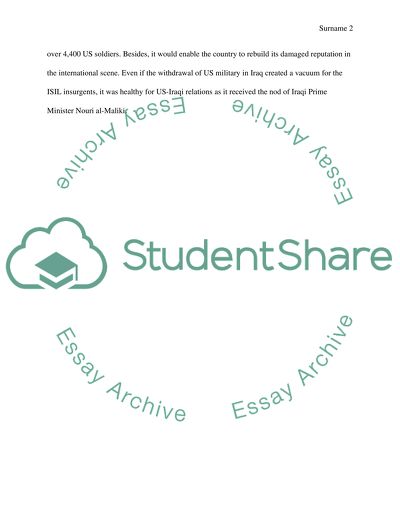 CHECK THESE SAMPLES OF Presidential roles

...? ELECTION OF The Presidential election of is shaping up to be an historic battle between Republicans and Democrats. The country’s future is very much at stake. President Barack Obama is reoffering as the Democratic candidate, unopposed within his own party. It is very likely the former governor of Massachusetts, Mitt Romney, will be the Republican nominee for president. Both men are very different and have different visions of where they want the country to go. The battle between them is likely to be fierce. At the moment, the polls are very close. In the end, in November 2012, Mitt Romney will be elected president, and Barack Obama will have an early retirement. Barack Obama is a good man, but voters will conclude he is over his head...
4 Pages(1000 words)Term Paper

...Analysis of the 2008 Presidential Debates Political debates are an excellent way to practice the use of dis analysis. They offer a great many examples of the different ways in which spoken word can be manipulated toward a meaning different than the words alone would normally imply (Chilton). It also gives the observer a glimpse into the inner workings and deeper motives of the speaker as the analysis assists in uncovering hidden meanings revealed through context, emotion, gestures, and intonation among other things (Wodak). Discourse analysis can also help the observer to better understand the power struggle that can take place between two competitors, especially those warring in an arena of words, such as a debate. Using segments...
18 Pages(4500 words)Book Report/Review

...As with any political decision, both sides should be equally considered and the outcomes of each option weighted until the politician can find the best outcome. This is especially important if the politician is a candidate for president, where every move is carefully watched by America. A candidate also needs to remember that it is ultimately the people's power to vote them into office, but on the other hand the candidate needs to get their without upsetting at least their own party, or they can find it hard to get anything through either the House or the Senate during their term in office. Taking the possible case of a Saudi Arabian company offering to buy the Regan National Airport into consideration, I think Presidential Candidate John...
3 Pages(750 words)Assignment

...Presidential Perspectives Democrats promote community responsibility and social justice while Republicans advocate individual responsibility and rights as well as individual justice. As such, democrats and republicans tend to support different ideologies. The discussions in this paper will manifest these differences. This paper spotlights Obama, a Democrat and a Republican, Mitt Romney. The discussion highlights Mitt Romney because he is currently the favourite in the GOP nomination battle. The paper uses the following frameworks as the background of the discussion: pluralism, elitism, Marxism, and state autonomy. Introduction The difference between Democrats and Republics is apparent in American politics. Democrats and Republicans differ...
5 Pages(1250 words)Essay

He was instilled with a sense of charity and the importance of giving to others (Morris, 1979).
Throughout his childhood, he struggled with many illnesses that he had to overcome (Miller, 1994). That spirit of conquering whatever he was faced with would stick with him throughout his life, making him an exceptional leader and a person of great accomplishment. Theodore Roosevelt would have been known for his many accomplishments, even if he hadn’t become President.
In terms of government office, Mr. Roosevelt held many public offices prior to being elected President. He was an assemblyman for the state of New York and governor of New York as well. He was also the Police Commissioner of New York City, a U.S. Civil Service...
5 Pages(1250 words)Research Paper

...Presidential candi s Presidential candi s Major national social problems The American presidential election will pity two presidential candidates mainly the democratic incumbent, Barrack Obama and the Republican Mitt Romney. The two candidates are traversing the states as they sell their policies to voters. The major social issues identified by the candidates include employment, economy, health care and immigration (AARP Bulletin, 2012). Policy response by the candidates Employment and Economy Recent polls state that the unemployment rates in the United States have significantly increased over the past four years since Obama ascended into presidency. This is attributable to the declining economy of the country. As a way of reversing...
5 Pages(1250 words)Essay

... Roles The concept of dramaturgy developed by Erving Goffman explains how people present their selves in social settings. All of them perform certain roles in order to fit their social circle. Goffman defines this process by the term impression management and states that it is achieved by sign vehicles (Brissett and Edgley). In their turn, sign vehicles are presented by manner of interacting, social settings and appearance. This paper will analyze the roles I perform in everyday life and how I engage in impression management in everyday life. Behavior of every person (actor) depends on the performance and the team. Communication in team is crucial; there is some information that is over-communicated and there are secrets that are silenced...
2 Pages(500 words)Research Paper
sponsored ads
Save Your Time for More Important Things
Let us write or edit the admission/application essay on your topic "Presidential roles" with a personal 20% discount.
GRAB THE BEST PAPER

Let us find you another Admission/Application Essay on topic Presidential roles for FREE!