Comments (0)
Add to wishlistDelete from wishlist
Cite this document
Summary
This case involves a raid by the police in Enga Province of Papua New Guinea near the Porgera gold mine, in which at least 200 homes were razed to the ground. While the police contend that they were targeting miners with no authorization to mine gold, and only burnt 20 homes,…
Download full paperFile format: .doc, available for editing
HIDE THIS PAPERGRAB THE BEST PAPER94.5% of users find it useful 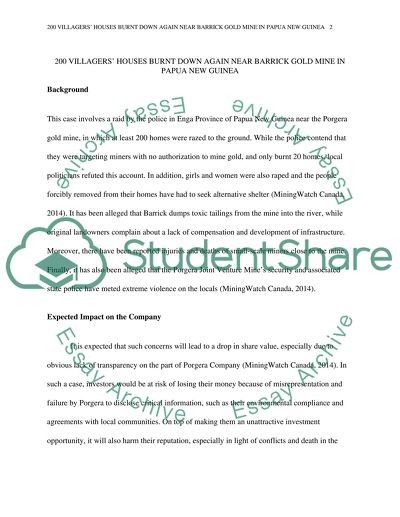 200 Villagers’ Houses Burnt Down Again Near Barrick Gold Mine in Papua New Guinea 200 VILLAGERS’ HOUSES BURNT DOWN AGAIN NEAR BARRICK GOLD MINE IN PAPUA NEW GUINEA
Background
This case involves a raid by the police in Enga Province of Papua New Guinea near the Porgera gold mine, in which at least 200 homes were razed to the ground. While the police contend that they were targeting miners with no authorization to mine gold, and only burnt 20 homes, local politicians refuted this account. In addition, girls and women were also raped and the people forcibly removed from their homes have had to seek alternative shelter (MiningWatch Canada, 2014). It has been alleged that Barrick dumps toxic tailings from the mine into the river, while original landowners complain about a lack of compensation and development of infrastructure. Moreover, there have been reported injuries and deaths of small-scale miners close to the mine. Finally, it has also been alleged that the Porgera Joint Venture Mine’s security and associated state police have meted extreme violence on the locals (MiningWatch Canada, 2014).
Expected Impact on the Company
It is expected that such concerns will lead to a drop in share value, especially due to obvious lack of transparency on the part of Porgera Company (MiningWatch Canada, 2014). In such a case, investors would be at risk of losing their money because of misrepresentation and failure by Porgera to disclose critical information, such as their environmental compliance and agreements with local communities. On top of making them an unattractive investment opportunity, it will also harm their reputation, especially in light of conflicts and death in the local community (MiningWatch Canada, 2014). In addition, they could also be liable to huge fines if they are found guilty of environmental permit violations.
Ethical Concerns for the Company
These issues have raised various ethical concerns about the company, despite creating social and economic benefits for the community via resource revenues and job creation. The company has obviously failed to sufficiently consult and engage the local community, while they have not given accurate information about the impact of their mining. In addition, there are environmental concerns about the safety of the mines, as well as lack of transparency about economic compensation and use of the local’s land. As a result, Porgera has failed to consider the social, environmental, and economic impacts of their activities, which are all important aspects of ethical mining practices.
Competitive Analysis
As a competitor, such issues have been avoided, especially as the company is aware that the local community expects to generate substantial improvements in their living standards (Ali, 2013). The company has sought to prevent conflicts with the locals by creating open and regular dialogue with the locals to build long-term and stable relationships. As such, a need for a strong team focused on community relations was set up. This will ensure that the community is involved in approval processes for mining operations, while also making an effort to understand the local community and work with them in achieving their expected benefits from the mining (Ali, 2013).
Addressing the Situation
Internally, the mining company should develop an opt-in program for remediation to take care of the victims and their families, which would offer them access to medical care and micro-credit (Ali, 2013). Such a program would be conducted by an independent team with the full support of the mining company, as well as the involvement of human-rights advocates. Publicly, the mining company should attempt to ensure that the locals know they are free to pursue action against persons related to the company, such as in the case of rape and maiming after violence.
Preventing Future Violations
To prevent any violations in the future, the mining company should provide training on voluntary principles on human rights and security to the state police attached to the mine. They may also develop a training program for their staff, locals, and community leaders on negotiating, as well as conflict resolution and reduction (Ali, 2013). In addition, they could also create educational materials that are culturally-appropriate to inform the locals about voluntary human rights and security principles. Finally, they could also develop an external mechanism for grievances to deal with concerns of the community, while also seeking to design alternative economic development activities for the locals to reduce poverty and reduce intrusion into the mine as a result (Ali, 2013).
References
Ali, S. H. (2013). Mining, the environment, and indigenous development conflicts. Tucson: The University of Arizona Press.
MiningWatch Canada. (2014, June 11). 200 Villagers’ Houses Burnt Down Again Near Barrick Gold Mine in Papua New Guinea. Retrieved October 31, 2014, from Global Research: http://www.globalresearch.ca/200-villagers-houses-burnt-down-again-near-barrick-gold-mine-in-papua-new-guinea/5386691 Read More
Share:
Tags
Cite this document
(“200 Villagers Houses Burnt Down Again Near Barrick Gold Mine in Papua Essay - 1”, n.d.)
Retrieved from https://studentshare.org/social-science/1663416-200-villagers-houses-burnt-down-again-near-barrick-gold-mine-in-papua-new-guinea

(200 Villagers Houses Burnt Down Again Near Barrick Gold Mine in Papua Essay - 1)
https://studentshare.org/social-science/1663416-200-villagers-houses-burnt-down-again-near-barrick-gold-mine-in-papua-new-guinea.

“200 Villagers Houses Burnt Down Again Near Barrick Gold Mine in Papua Essay - 1”, n.d. https://studentshare.org/social-science/1663416-200-villagers-houses-burnt-down-again-near-barrick-gold-mine-in-papua-new-guinea.
Comments (0)
Click to create a comment or rate a document

Health status of people living near gold mine in Saudi Arabia

...Module Health Status of People Living near Mahd Ad’Dahab Gold Mine in Saudi Arabia BACKGROUND Commercial mining in Mahd Ad’Dahab, situated nearly 300km northeast of Jeddah in Saudi Arabia, began in 1988 alongside the instigation of a research program to carry out a detailed survey of the area to determine which sections of the region had mineral deposits (Gold and Base, 2012). According to The mineral life span was boosted by the doubling of the initial mineral reserves. This was preceded by the successful results courtesy of the constantly increasing mining efforts which eventually led to lower costs per unit capital...
4 Pages(1000 words)Research Paper

The Trobrianders of Papua New Guinea

...? The Trobrianders of Papua New Guinea Introduction The anthropological history of human civilization is very interesting. The book “The Trobriandersof Papua New Guinea (Case Studies in Cultural Anthropology) by Annette B. Weiner presents an intact re-examination of the life, religion and politics of the Trobrianders in a new dimension. It is based on the description of Malinowski’s classic written during the first half of the twentieth century which bears the ethnographic description of men as well as women. Annette Weiner presents a balanced and a newer vision of the society from a perspective of both men and women of...
4 Pages(1000 words)Book Report/Review

..., there is limited supply of this commodity to the market due to low number of investors in the field. The mines range from small scale to large scale. The list below shows countries that has gold mines. a Pakistan, Reko Dik mine. b USA, Alaska c City of Gold in Canada d Welsh gold e Gold mine in Australia f Gold mine in China g Alsukari, new gold mine in Egypt h Gold mine in Witwatersrand, South Africa. Figure6. The super Pit gold mine in Australia,...
7 Pages(1750 words)Research Paper

The Trobrianders of Papua New Guinea

...The Trobrianders of Papua New Guinea. Annette Weiner. 1st ed. US: Wadsworth Publishing. 1988 0 SUMMARY Anne Weiner's "The Trobrianders of Papua New Guinea" has become one of the most often cited reading materials not only for discovering Polynesian culture but also in discussing socio-anthropological perspectives. In this study, Weiner tries to provide a view of the Trobrianders culture and behaviour that is remarkable for its depth and clarity. Weiner's work is actually a re-examination of this particular culture which was first placed on the anthropological map with the brilliant and classic early 20th century writings of Malinowski....
10 Pages(2500 words)Book Report/Review

...or launch a small business in Papua New Guinea requires a detailed data in order to come up with a productive plan. Primarily, Papua New Guinea is a country that is rich in natural resources. However, the exploitations have been weighed down by the high cost of industrialization and the system of land title has been vague in which land owners are hard to identify. The basic livelihood of the people in Papua New Guinea is said to be agriculture. Through this, people could take advantage of what available resources are at hand and use it to develop a productive...
6 Pages(1500 words)Article

...business. As a result, there is limited supply of this commodity to the market due to low number of investors in the field. The mines range from small scale to large scale. The list below shows countries that has gold mines. a Pakistan, Reko Dik mine. b USA, Alaska c City of Gold in Canada d Welsh gold e Gold mine in Australia f Gold mine in China g Alsukari, new gold mine in Egypt h Gold mine in Witwatersrand, South Africa. Figure6. The super Pit gold...
7 Pages(1750 words)Research Paper

... of power. In the past, for example, it was regarded with high esteem and was only at the disposal of the great leaders who existed within such generations (McDonald & Gastmann, 2001, p. 119). Those in authority were convinced that the more gold they had, the more powerful they were, hence their decision to control several deposits of gold. References Bernstein, P. L. (2012). The power of gold: the history of an obsession. Hoboken, NJ, Wiley. Macdonald, S. B. & Gastmann, A. L. (2001). A history of credit & power in the Western world. New Brunswick, NJ, Transaction Publishers.... History of Gold The advancements registered within the industrial sector of our economy have mainly been attributed to both iron and copper;...
1 Pages(250 words)Article

...200 Villagers’ Houses Burnt Down Again Near Barrick Gold Mine in Papua New Guinea Background/context On June 6, residents of the Wingima village located near Barrick’s Porgera Gold mine were evicted by the Papua New Guinea police Mobile Units, and houses of more than 200 villagers were burn down as a result (Global Research, 2014). All this has occurred without previous warning and eviction notices. Despite the efforts of the Porgera Landowners Association (PLOA) to resettle the community and to restrain the State from burning the houses, the National Court of Papua New Guinea has not undertaken measures necessary for protecting local citizens and their property (Global Research, 2014). This behavior of the national court is known... ...
2 Pages(500 words)Essay

..., W. (1974). People of the Valley; Life with a cannibal tribe in New Guinea. Random House. Schwimmer, B. The Dani of New Guinea (1997). Retrieved on 13th June 2015 from: https://umanitoba.ca/faculties/arts/anthropology/tutor/case_studies/dani/ Sexton, L. (1982). A Womans Savings and Exchange System in Highland Papua New Guinea, Oceania 52: 167–198. Zimmer, L. & Amakoshi, T. (2007). Papua New Guinea. Retrieved on 13th June 2015 from: http://www.everyculture.com/No-Sa/Papua-New-Guinea.html... Cultural Worksheet For The Dani, Papua New Guinea Culture is the system of interaction between components (subsystems) that strives in meeting the needs of its members. The Grand Valley Dani were the...
6 Pages(1500 words)Essay
sponsored ads
Save Your Time for More Important Things
Let us write or edit the essay on your topic "200 Villagers Houses Burnt Down Again Near Barrick Gold Mine in Papua New Guinea" with a personal 20% discount.
GRAB THE BEST PAPER

Let us find you another Essay on topic 200 Villagers Houses Burnt Down Again Near Barrick Gold Mine in Papua New Guinea for FREE!