Comments (0)
Add to wishlistDelete from wishlist
Cite this document
Summary
Virtue ethics thus specifies that in order to mitigate this issue, it is vital for every individual to have a strong understanding of his/her moral rights and duties. Such awareness makes an individual…
Download full paperFile format: .doc, available for editing
HIDE THIS PAPERGRAB THE BEST PAPER95% of users find it useful 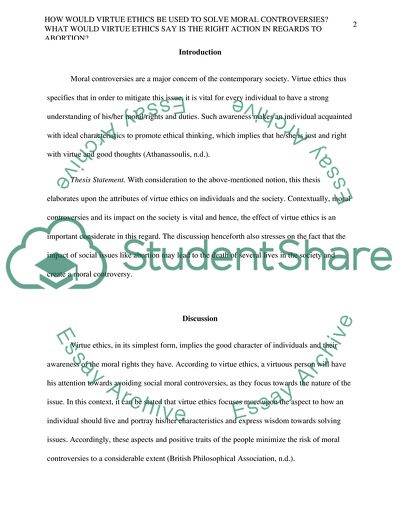 How Would Virtue Ethics Be Used To Solve Moral Controversies? What Would Virtue Ethics Say Is The Right Action In Regards To Abortion? Introduction Moral controversies are a major concern of the contemporary society. Virtue ethics thus specifies that in order to mitigate this issue, it is vital for every individual to have a strong understanding of his/her moral rights and duties. Such awareness makes an individual acquainted with ideal characteristics to promote ethical thinking, which implies that he/she is just and right with virtue and good thoughts (Athanassoulis, n.d.).
Thesis Statement. With consideration to the above-mentioned notion, this thesis elaborates upon the attributes of virtue ethics on individuals and the society. Contextually, moral controversies and its impact on the society is vital and hence, the effect of virtue ethics is an important considerate in this regard. The discussion henceforth also stresses on the fact that the impact of social issues like abortion may lead to the death of several lives in the society and create a moral controversy.
Discussion
Virtue ethics, in its simplest form, implies the good character of individuals and their awareness of the moral rights they have. According to virtue ethics, a virtuous person will have his attention towards avoiding social moral controversies, as they focus towards the nature of the issue. In this context, it can be stated that virtue ethics focuses more upon the aspect to how an individual should live and portray his/her characteristics and express wisdom towards solving issues. Accordingly, these aspects and positive traits of the people minimize the risk of moral controversies to a considerable extent (British Philosophical Association, n.d.).
Virtue ethics is based upon three tenets to avoid the moral controversies, which includes ‘agent-based theories, Eudaimonism, and the ethics of care’. In other words, virtue ethics is a form of “Modern Moral Philosophy”, which implies that every individual living in a society needs to have rational thoughts to avoid controversies. Hence, virtue implies towards the right action of an individual guided by their moral obligations (British Philosophical Association, n.d.).
Concerning abortion, the right attitude or virtue depends upon the relevance of action, based on correct information. As virtue ethics refers fetus to be a life, and because killing a life is against the moral consideration, virtue ethics refers abortion as a wrong action. However, the action of abortion can be referred as virtuous, if the decision is based on accurate information, independence and self-determination by the expecting mother and the pregnancy may be a life-threat to the woman or to the infant after birth. Therefore, the right action of virtue ethics towards abortion depends on various facets of rights and wrong (Lu, 2011).
Conclusion
Virtue ethics are linked with the behavior, attitude and characteristics of individuals. It is in this context that the actions and moral controversies largely depend upon their behaviors and actions for the well-being of the society. Accordingly, the action of abortion, whether right or wrong, depends upon the right information and the associated factors in terms of virtue. Virtue ethics, as analyzed, focuses more on an individual personality and hence, to avoid any controversies, it is of significance that every individual in the contemporary society is virtuous in nature.
References
Athanassoulis, N. (n.d.). Virtue Ethics. A peer reviewed resource, 1.
British Philosophical Association. (n.d.). Virtue ethics in action. Retrieved from http://www.bpa.ac.uk/answers/files/Virtue%20Ethics%20in%20Action.pdf
Lu, M. (2011). Abortion and virtue ethics. Chapter 6, 101-123. Read More
Share:
Tags
Cite this document
(“How would Virtue Ethics be used to solve moral controversies What Essay”, n.d.)
How would Virtue Ethics be used to solve moral controversies What Essay. Retrieved from https://studentshare.org/social-science/1658416-how-would-virtue-ethics-be-used-to-solve-moral-controversies-what-would-virtue-ethics-say-is-the-right-action-in-regards-to-abortion

“How Would Virtue Ethics Be Used to Solve Moral Controversies What Essay”, n.d. https://studentshare.org/social-science/1658416-how-would-virtue-ethics-be-used-to-solve-moral-controversies-what-would-virtue-ethics-say-is-the-right-action-in-regards-to-abortion.
Comments (0)
Click to create a comment or rate a document

...and industries of unfairly low wages to their workers, long working hours and unsafe working environment, which may lead to the threat of the workers safety. The putting into action of the global manufacturing principles seemed to a stiff step for the Mattel toy company because it lead to the growth of more challenges in the company. This paper will use the virtues of honesty, temperance, and generosity amongst their workers in order to solve the problems facing the Mattel toy company. The company faces the following issues working conditions, worker safety, fairness, and organizational attitudes towards the environment. According to researchers in the field of...
5 Pages(1250 words)Research Paper

...? Essay, Business: Business Ethics and Virtue Ethics Teacher: December 21, Ethics includes the required acts or non-acts in any given situation. The study will scrutinize virtue ethics. The study will scrutinize deontology and utilitarianism ethics. Virtue ethics focuses on implementing what is morally right. Virtue ethics Virtue ethics focuses on complying with moral ethics standards. Ethics focuses on doing what is right or correct and avoiding what is wrong or incorrect. Of the virtues, one virtue is justice. According to Immanuel Kant, justice virtue is included in his famous methaphysics of morals. The justice virtue ethics can be applied to each sweatshop operation. Kant’s morals include the individuals’ compulsory obedience... be...
5 Pages(1250 words)Essay

...understanding. Aristotle is on the side of virtue ethicists. Aristotle argues that moral virtue is about right emotion and right action. The moral individual is generally situated in the middle as regards both. Hence Aristotle explains the premise: the virtuous individual feels “both fear and confidence and appetite and anger and pity and in general pleasure and pain… at the right times, with reference to the right objects, towards the right people, with the right aim, and in the right way” (Broadie 100). Simply put, to...
5 Pages(1250 words)Essay

...into their thoughts to establish the sort of people we want to be, the virtues that are expected of the persons we are trying so hard to be, the kinds of actions that will make us as individuals cultivate the kinds of actions that virtue ethics require us to have if we are to be successful in becoming the people we want to be. The ethics tend to polish people to be more reliable members of the society who have the understanding to do what is virtually right. (Maggio 35) Virtue ethics also experiences many problems like in the case of many theories that...
4 Pages(1000 words)Essay

...VIRTUE ETHICS I have always believed that everything we do and experience is governed by two important things ly, 'environment' and 'trend'. By environment, I mean to say that our actions are largely determined by the way we are influenced by all the things and events around us that drives us to take the appropriate actions. Likewise, I also deem it right to say that our actions are also influenced by the trends of the current times. As such, I would look at virtue ethics and good character as visionary goals that are...
2 Pages(500 words)Personal Statement

...Virtue Ethics Rosalind Hursthouse provides the following account about what is right action, i.e., a particular action A is right for a person S in circumstances c, only if a completely virtuous agent would characteristically perform the action A in the said circumstances. In his argument against Hursthouse’s claims on virtue, Johnson bases his claims on the fact that Hursthouse has specified a “fully virtuous person” in the circumstances she mentions. He sets out another category of virtue, referring to those who are not fully virtuous, i.e., sub virtuous. In the light...
2 Pages(500 words)Essay

...1) Choose three (3) "virtues” and then provide a clear definition of each. The principles of ethics are based on certain moral value. They seek to take actions virtuously within a particular circumstance and are associated with the concept of virtues. The three virtues that can be identified in the Mattel Inc are justice, honesty and fairness. Justice: While considering justice as a virtue, we are generally referring to an attribute of people, even though justice of person has various indications to social justice. “Justice as a virtue” is, in reality, unclear in its application to a human being in the social context. Personal justice obviously, refers to the moral concerns which have to do with commodities or material goods... Para...
5 Pages(1250 words)Essay

... between people and doing good both to oneself and others (David, 77). Moral agency is the power an individual has to make judgments and decide on whether to do right and wrong basing on the commonly held beliefs of the community. Explaining How You View Yourself In Light Of These Terms I prefer that ethics is a real requirement for living in life since without it, the human actions are random and useless. There would be no way to choose between a good goal and a wrong one if there will be none to choose upon. I personally view myself as believing in having virtues to be very important in life. This is because moral goodness... ...
1 Pages(250 words)Assignment

...Philosophy Virtue Ethics The Categorical imperative is a philosophical concept that strives to provide explanation on how human beings relate. Over the history of the world, philosophers have coined many theories to explain the morality of human behaviors and to explain why human beings behave the way they do. The attempt of various philosophical theories of morality is to construct a moral identity that would suit personal life and guide people on doing good or bad in the society. Kant is among philosophers who have strived to explain the morality of human behavior and the rationale that can be...
7 Pages(1750 words)Essay

...was on different occasions asked if there was a particular right way of doing things, like the proper method of worship, or what to do to gain eternal life. In His responses to all such questions, Jesus said there were no specific ways of doing things right; that there were not set of rules or laws. Renaissance came up with moral law, which is what determined the right or wrong thing to do. Many later day philosophers, such as Anscombe (1958), have disagreed with the renaissance view, insisting there shouldn’t be any law because, in any case, there can’t be a law without a lawgiver. Virtues are defined by Aristotle as character traits manifested in...
1 Pages(250 words)Essay
sponsored ads
Save Your Time for More Important Things
Let us write or edit the essay on your topic "How would Virtue Ethics be used to solve moral controversies What would Virtue Ethics say is the right action in regards to abortion" with a personal 20% discount.
GRAB THE BEST PAPER