Comments (0)
Add to wishlist Delete from wishlist
Cite this document
Summary
The paper "Political Science Paper Proposal" describes what the close relationship between politics and economic development has long been a topic of discussion in various fields of study. Several authors and researchers aimed at elaborating how the two key institutions interact with each other…
Download full paper File format: .doc, available for editing
HIDE THIS PAPERGRAB THE BEST PAPER96.1% of users find it useful 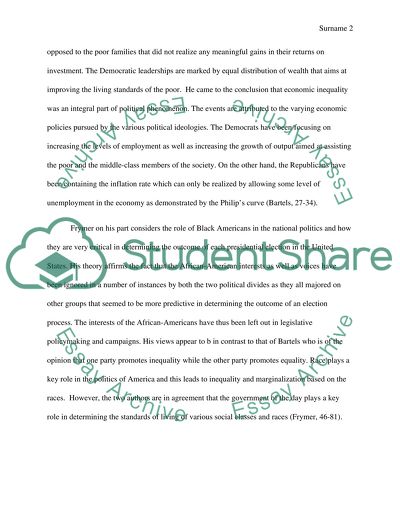 ﻿
Political Science Paper Proposal
The close relationship between politics and economic development has long been a topic of discussion in various fields of study. The need to develop credible evidence of the two major indicators of national sustainability and development has triggered several authors and researchers to come up with findings aimed at elaborating how the two key institutions interact with each other in order to realize a predictive behavior pattern. The study seeks to analyze the works of Frymer and Bartels in its quest to develop an understanding of the American society in a broader context. The main point of the argument is on the establishment of whether the two scholars have a similar point of reasoning or differ in their understanding of various political ideologies and their roles in shaping the standards of living among different social classes.
Bartels' book aimed at illustrating the increased income inequality that was witnessed under the Republican presidential administration but greatly diminished during the Democratic presidential administration in the United States. The Republican administrations in the 1970s witnessed the emergence of rich families which registered substantial net gains in their income as opposed to the poor families that did not realize any meaningful gains in their returns on investment. The Democratic leadership is marked by the equal distribution of wealth that aims at improving the living standards of the poor. He came to the conclusion that economic inequality was an integral part of the political phenomenon. The events are attributed to the varying economic policies pursued by the various political ideologies. The Democrats have been focusing on increasing the levels of employment as well as increasing the growth of output aimed at assisting the poor and the middle-class members of the society. On the other hand, the Republicans have been containing the inflation rate which can only be realized by allowing some level of unemployment in the economy as demonstrated by Philip's curve (Bartels, 27-34).
Frymer on his part considers the role of Black Americans in the national politics and how they are very critical in determining the outcome of each presidential election in the United States. His theory affirms the fact that the African-American interests, as well as voices, have been ignored in a number of instances by both the two political divides as they all majored on other groups that seemed to be more predictive in determining the outcome of an election process. The interests of the African-Americans have thus been left out in legislative policymaking and campaigns. His views appear to b in contrast to that of Bartels who is of the opinion that one party promotes inequality while the other party promotes equality. Race plays a key role in the politics of America and this leads to inequality and marginalization based on the races. However, the two authors are in agreement that the government of the day plays a key role in determining the standards of living of various social classes and races (Frymer, 46-81).
Further analysis of the works of these two scholars will reveal inner facts on the political landscape in America and how it affects the entire nation and its inhabitants irrespective of their cultural beliefs, race, and socio-economic status.
Work Cited
Bartels, Larry M. Unequal Democracy: The Political Economy of the New Gilded Age. New York: Russell Sage Foundation, 2008. Internet resource.
Frymer, Paul. Uneasy Alliances: Race and Party Competition in America. Princeton, N.J: Princeton University Press, 2010. Print. Read More
Share:
Tags
Cite this document
(“Political Science Paper Proposal Assignment Example | Topics and Well Written Essays - 250 words”, n.d.)
Political Science Paper Proposal Assignment Example | Topics and Well Written Essays - 250 words. Retrieved from https://studentshare.org/social-science/1654907-political-science-paper-proposal

Like the Arizona anti-immigration law, the Alabama Bill has been the subject of much debate and controversy. Hammon’s campaign sentiments express the general views of those who support Arizona-style anti-immigration laws. Hammon said: We’ve let this go on too long. Our budget cannot handle it. Our justice system cannot handle all the crime. We want them to stop taking advantage of our benefits (Beyerle 2011). These sentiments reflect the concern that undocumented individuals are taking jobs that American citizens can have. More troubling however, undocumented aliens do not pay income taxes and as a result the government is denied a valuable source of revenue. If American citizens held the jobs that are currently taken by undocume...
5 Pages (1250 words) Research Paper

... Political Science Introduction The social contract is a logical tool that intends to give a clear thoughtful affiliation between citizens and their government (Cohen and Fermon, p 280). The social contract is also known as the political contract. It states that individuals must come together into political societies through a process of mutual consent, agreeing to follow all universal rules and accept the corresponding duty of looking after themselves and others (Cohen and Fermon, p 281). Some of the world’s most recognized social philosophers include; Locke, Jean Rousseau, Hobbes and Edmund Burke. They all came up with different views concerning political authority. Hobbes supported complete monarchy; Locke supported natural rights...
6 Pages (1500 words) Essay

3.) The party system exacerbates, and further marginalizes the position of a historically disadvantage minority group like the African-American through the forwarding of the political agenda of the party. Counter Evidence 1.) There have been black American politicians who are members of political parties long before and they could have done something to help and present black Americans’/minorities’ interests in the legislative arena. Response: 1.) The minority is often excluded in terms of involvement in a great deal of substantive decision making. This aside from party leaders distancing themselves from any black leaders attempting to raise issues associated in subtle ways with African Americans such as contemporary welfare poli...
7 Pages (1750 words) Term Paper

... Political science (political analysis) Globalisation calls into question the adequacy of comparative politics and international relations as methods to understand the organization and exercise of power in social life. The growth of a global dimension of social relations can even cast doubt on the very project of political science and the academy's practice of disciplinary divisions more generally. Contemporary accelerated globalisation gives ample cause for a paradigm shift in social analysis toward what might be called 'world system studies'. That said entrenched intellectual traditions and institutional forces exert substantial resistance to such a change. In this paper we have taken two theoretical concepts to analyze globalisation...
6 Pages (1500 words) Essay

Introduction As the newly elected ambassador of the United s of America to the United Nations, the county that I would choose between Netherlands and France in Western Europe region as a member to the United Nations Human Rights council would be France. In selecting France as the best suited country for this position, a number of merits and demerits would be identified and assessed between the two nations. The nation that holds a grater advantage of the other in terms of human rights enforcement in its jurisdiction would be the favorite for pick.
Thesis statement
This research would be based on the fact that France is the best suited nation in comparison to Netherlands to be elected as a member to the United Nations Human Ri...
2 Pages (500 words) Research Proposal

...Gay Marriage: Our Mutual Joy: An Analysis For this paper, I will be examining a story published in Newsweek last December 6, 2008, en d Gay Marriage: Our Mutual Joy written by Lisa Miller. This article is a report on the gay marriage issue sparked by its legalization in California. It’s main subject was stated this way: The battle over gay marriage has been waged for more than a decade, but within the last six months – since California legalized gay marriage and then, with a ballot initiative in November, amended its Constitution to prohibit it – the debate has grown into a full-scale war, with religious-rhetoric slinging to match. (Miller 2008) This is the Newsweek cover story for the December 15, 2008 issue. An examination in regard...
2 Pages (500 words) Essay

...Your full full September 11, Sovereignty of s and Iranian Nuclear Program “Irans nuclear program is one of the most polarizing issues in one of the worlds most volatile regions” (New York Times). It has become an international issue because Iran’s nuclear program is a constant threat to the independence of various countries. If we explore the background of Iran’s nuclear program, we come to know that Iran started working on nuclear program in 1960s by saying that basic purpose of the program will be to overcome the shortage of electricity and Iran will allow the United Nation inspectors to visit and inspect the nuclear program. After 1979 revolution, Iranian government started to stop United Nations to inspect Iranian nuclear... full full...
2 Pages (500 words) Essay

The aim of this paper is to understand and evaluate whether, in American politics, Paul Frymer’s theory relates to or explains Larry Bartels’ observations about the poor, per se, considered as one of the “captured groups.”
In Uneasy Alliances, Frymer challenged how people, especially the Americans, view alliances, different races or groups, politics and its parties, and the American politics itself. All over the world, in politics, it is a standard principle to appeal to all kinds of groups in order to win an office. Frymer showed the opposite. He showed that all groups, majority and most especially the minority, are treated poorly and not equally. Politicians spend much of their time, efforts, and resources on white voters, t...
4 Pages (1000 words) Term Paper

Let us find you another Assignment on topic Political Science Paper Proposal for FREE!