Comments (0)
Add to wishlistDelete from wishlist
Cite this document
Summary
The case study "Current Age of the Universe According to the Big Bang Theory" states thatPhilosophers, priests, and astronomers have considered the age of the universe for thousands of years. In the last century with observations and discoveries made by Edwin Hubble and Penzias and Wilson…
Download full paperFile format: .doc, available for editing
HIDE THIS PAPERGRAB THE BEST PAPER94.3% of users find it useful 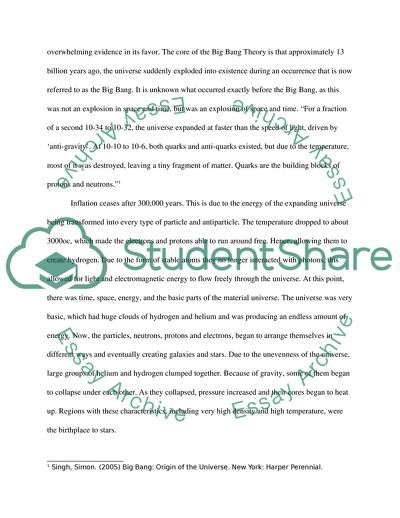 In examining the age of the universe it’s necessary to consider that although the universe began relatively rapidly, different elements emerged at different times. While scientists and astronomers have made great strides over the last century in determining the age of the elements of the universe, it is still a debatable argument. The overriding understanding emerges from the Big Bang Theory, which has come to be accepted amongst most astronomers due to the overwhelming evidence in its favor. The core of the Big Bang Theory is that approximately 13 billion years ago, the universe suddenly exploded into existence during an occurrence that is now referred to as the Big Bang. It is unknown what occurred exactly before the Big Bang, as this was not an explosion in space and time, but was an explosion of space and time. “For a fraction of a second 10-34 to 10-32, the universe expanded at faster than the speed of light, driven by ‘anti-gravity’. At 10-10 to 10-6, both quarks and anti-quarks existed, but due to the temperature, most of it was destroyed, leaving a tiny fragment of matter. Quarks are the building blocks of protons and neutrons.”

Let us find you another Case Study on topic Current Age of the Universe According to the Big Bang Theory for FREE!