Comments (0)
Add to wishlist Delete from wishlist
Cite this document
Summary
For many years, mysticism and divination have been utilized by many people to answer difficult questions, see the future and solve perceived problems. For this exercise, I utilized the divination to…
Download full paper File format: .doc, available for editing
HIDE THIS PAPERGRAB THE BEST PAPER93.1% of users find it useful 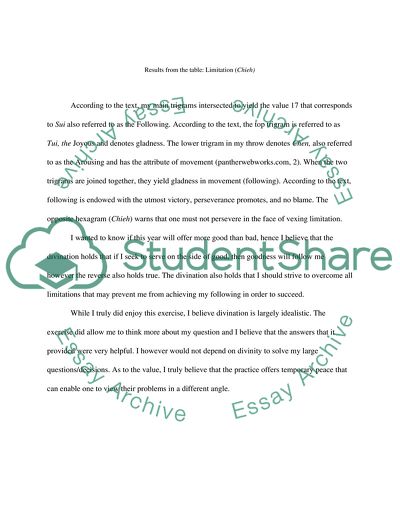 Divination: I Ching Inserts His/Her Inserts Inserts Personal reflection The I Ching is one of the oldest divination systems originating from China. For many years, mysticism and divination have been utilized by many people to answer difficult questions, see the future and solve perceived problems. For this exercise, I utilized the divination to answer the question “Will this year bring more good than bad?” I sought a place that had plenty of trees and minimal disruption from people in order to meditate and carry out this exercise. On throwing the 3 coins the required six times, the results are as given below:
Coin toss

Results from the table: Following (Sui)
Changing the Moving Lines into their opposites
Results from the table: Limitation (Chieh)
According to the text, my main trigrams intersected to yield the value 17 that corresponds to Sui also referred to as the Following. According to the text, the top trigram is referred to as Tui, the Joyous and denotes gladness. The lower trigram in my throw denotes Chen, also referred to as the Arousing and has the attribute of movement (pantherwebworks.com, 2). When the two trigrams are joined together, they yield gladness in movement (following). According to the text, following is endowed with the utmost victory, perseverance promotes, and no blame. The opposite hexagram (Chieh) warns that one must not persevere in the face of vexing limitation.
I wanted to know if this year will offer more good than bad, hence I believe that the divination holds that if I seek to serve on the side of good, then goodness will follow me however the reverse also holds true. The divination also holds that I should strive to overcome all limitations that may prevent me from achieving my following in order to succeed.
While I truly did enjoy this exercise, I believe divination is largely idealistic. The exercise did allow me to think more about my question and I believe that the answers that it provided were very helpful. I however would not depend on divinity to solve my large questions/decisions. As to the value, I truly believe that the practice offers temporary peace that can enable one to view their problems in a different angle.
Works Cited
“I Ching / Book of Changes: Book I” http://www.pantherwebworks.com/I_Ching, 16 May 2011 Read More
Share:
Tags
Cite this document
(“Chinese History Essay Example | Topics and Well Written Essays - 250 words”, n.d.)
Chinese History Essay Example | Topics and Well Written Essays - 250 words. Retrieved from https://studentshare.org/religion-and-theology/1650030-chinese-history

CHECK THESE SAMPLES OF Chinese History

... THE MODERN HISTORY OF CHINA Introduction With over 4,000 years of documented history, China is one of the few modern nations that al thrived both economically and in culture during the early years of world civilization. The country is indeed unique among nations despite the turmoil, both social and political, that occurred in this nation in the early days. China’s cultural growth has seen very little foreign influence with Buddhism from India being the major contributor. Attempts by barbarians like the Manchu who earlier made contact with China did not have any influence on their way of life and instead got assimilated into the Han Chinese culture. The silk industry for example, has been part of China’s heritage for the last 5000 years...
10 Pages (2500 words) Research Paper

... Chinese History A2 The centralized government created by the Han dynasty was because of a number of reforms that were carried out by the emperors. The development of institutions helped to create stability and order within the vast empire. Moreover, there was a system of training administration officials which was an innovative approach towards ensuring that the affairs of the state could be managed in an efficient and effective manner. The establishment of a bureaucracy helped to ensure the administration process in an effectual manner (Ebrey, 67). Confucianism was adopted as the major system for running the affairs of the state. Confucian system advocated the belief that each individual must obey the family and have devotion towards...
4 Pages (1000 words) Essay

... to overcome in the shortest time possible. In 1928, the Kuomintang (KMT), which had ruled China, got into constant conflict with the Chinese Communist Party (CCP) that made governance almost impossible. The Kuomintang was later defeated and retreated to Taiwan after it had made several political, economical and military missteps. As at the year 1934, Chiang Kai-shek, the Nationalist leader in collaboration with Song Meiling had called for China to carry out a “New Life Movement which aimed at the promotion of a regular life guided by four principles and virtues namely ritual or decorum, rightness or duty, integrity or honesty and the sense of shame”.1 These were aimed at promoting morality, dealing with people in their human affairs...
5 Pages (1250 words) Essay

...Discuss China's traditional political organization during its long span of dynastic history. China had been conquered several times by alien invaders. Dynasties and governments changed but the Chinese way of life remained the same. The Manchus, for instance, overthrew the Ming Dynasty (last native dynasty of China) and ruled for 267 years. They forced the Chinese to wear queues (pigtails) as a sign of subjugation. This new hair-do changed the appearance of the people but not their mentality or spirit. In fact the Manchu conquerors themselves changed their way of life and became "more Chinese than the Chinese themselves". (Grousset, p. 94) Society in old China was divided to five classes. The highest class was composed of scholars...
5 Pages (1250 words) Essay

... Chinese History, Mao Zedong The various changes experienced in China have been associated with Chinese revolution.The key leader mainly associated with revolution is Mao Zedong. Various forms of violence characterized the rise to power of Mao. The various forms of violence used by the leader and his followers were meant to consolidate power as well as a reduction of some of the dissenting views. One of the revolution process associated with Mao is the Cultural Revolution. The revolution was used by Mao to reaffirm his authority. This was based on the assertion that the crops of leaders heading the Communist Party of China (CPC) were taking views against Mao that could be detrimental to the country success. As a result, Mao urged...
5 Pages (1250 words) Essay

...﻿Chinese History # Question 1 In Ten Thousand Things, Ledderose starts with a modular system referred to as the Chinese Script. According to the author, the latter is an early modular system in which fifty thousand characters are generated from a structural repertoire of approximately two hundred units. On the other end of the spectrum, is the Chinese wooden construction. This is a form of traditional Chinese architecture, characterized by beam and post construction. In this mode of architecture, the weight of a building, and particularly the roof, get support from vertical columns made of wood and not from partitioning walls. Chinese wooden construction features one of the fundamental principles characterizing classical Chinese...
9 Pages (2250 words) Assignment

... culture in a way that the Chinese abandoned their material culture for Buddhist thinking and teaching which altered the class system that existed. The importance of Buddhist Monks in the history of China is that they influenced the Chinese to abandon material culture and focus on spiritual quest and most importantly the truth. Question III. 2. Writings about luxury goods in Ming China revealed a lot about Ming ideas about things and about the past. There is much evidence that suggests that during the Ming dynasty in China, the enjoyment of the fruits of commerce was a permitted behavior. During this time, people were buried with certain quantities of goods that they would use in their afterlife. The writings reveal the belief in material...
10 Pages (2500 words) Essay

As the top-most military commander of the army, he used the military to flaunt his power and force his policies across society. The end result was diminished power of the local governments and a strengthened centralized authority.
As soon as the dynasty came to power, semi-autonomous kings at the local level threatened the authority of the central government under the emperor (Shu-hui 121). But in response, the emperor and the central authorities substantially weakened the influence of the regional administrators by directing the imperial court to implement reforms. Such actions were in response to serious challenges to the central authority by regionally-instigated movements such as the Rebellion of the Seven States.
The em...
4 Pages (1000 words) Literature review

... Chinese History The significance of semi-colonialism in China China as one of the world’s largest nations with a population of about 475 million people and a territorial size of 10 million square kilometers remained under semi-colonialism till the Second World War. Despite this nation being independent, it still remained an economically dependent state on three main imperialist powers. These imperialist powers were the United States, the United Kingdom, and Japan. The three nations fought amongst themselves and against other capitalist nations for the “right” to exclusively exploit both natural and human resources and convert China into their own colony. Chinese semi-colonialism was viewed as both a historical moment mainly specified...
6 Pages (1500 words) Essay

... irrelevant, which resulted in their humiliation and dishonor. Some were prosecuted accordingly, as the people regarded them as traitors. The dichotomy in thought in China is evident in the way the country portrays itself to the outside world. The Chinese Revolution is part of the history of China and, as with every historical event has differing and conflicting accounts of its impact on Chinese life. Those who sought to establish communist socialism sought to change the politics of China and its culture. Contrastingly, those who wanted to maintain the status quo were regarded as elitists concerned about themselves at the expense of the masses. Chinese art and literature done by artisans inside or outside the country was a reflection...
9 Pages (2250 words) Essay
sponsored ads
Save Your Time for More Important Things
Let us write or edit the essay on your topic "Chinese History" with a personal 20% discount.
GRAB THE BEST PAPER

Let us find you another Essay on topic Chinese History for FREE!