Comments (0)
Add to wishlist Delete from wishlist
Cite this document
Summary
The paper "Ordination of Women and Ordination of Associate Pastors" states that advantages of women’s ordination are many and steps need to be implemented which lead up to it. “Whatever the role women play in ministry, their supporters argue that ‘feminization’ of the church is exactly the point…
Download full paper File format: .doc, available for editing
HIDE THIS PAPERGRAB THE BEST PAPER95.9% of users find it useful 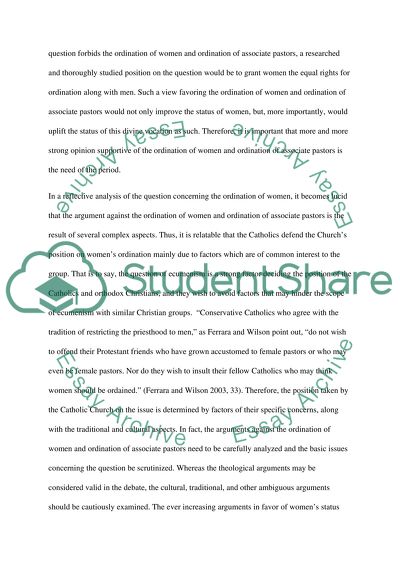 What Ministerial Ordination Means to Me

Reflection on co-ordination and management in perioperative environment

The Controversy of Ordination of Bill Johnson

Catholic Church's View on Ladies' Ordination to the Papal Throne

9 Pages (2250 words) Research Paper
sponsored ads
Save Your Time for More Important Things
Let us write or edit the assignment on your topic "Ordination of Women and Ordination of Associate Pastors" with a personal 20% discount.
GRAB THE BEST PAPER