Comments (0)
Add to wishlist Delete from wishlist
Cite this document
Summary
The Book of Acts lauded the Berean Jews because of their eagerness in receiving God’s word and their constant search of the Scriptures to validate the teachings that they’ve heard from Paul and the other disciples. …
Download full paper File format: .doc, available for editing
HIDE THIS PAPERGRAB THE BEST PAPER98% of users find it useful 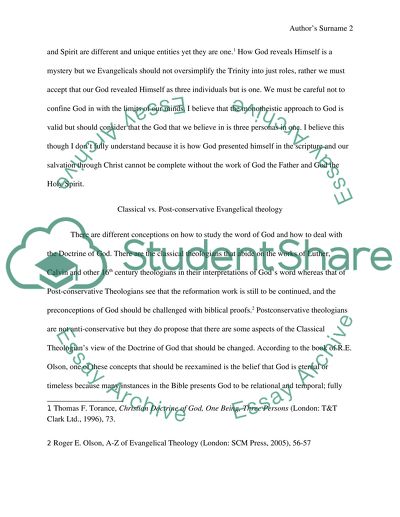 “The Top Three Issues Relating to the Doctrine of God That Evangelical Essay”, n.d. https://studentshare.org/religion-and-theology/1476573-the-top-three-issues-relating-to-the-doctrine-of-god-that-evangelical-christians-need-to-address-in-the-church-and-in-the-academy.
Comments (0)
Click to create a comment or rate a document

Milton begins painting his image of God as all powerful and all reasonable with the first book, as Satan talks with his companion about the fall they have experienced together....
9 Pages (2250 words) Book Report/Review

NSSO defines Unemployment as a situation in which all those who, owing to lack of work...
15 Pages (3750 words) Assignment

Corporate governance is about ethical conduct in business. Ethics is concerned with the code of valu...
6 Pages (1500 words) Report

The Doctrine of Equity

Equity has evolved over time; however, defining the exact nature of equity in relation to the law can be problematic. The main impetus behind the doctrine of equity was a desire to right the wrongs created by the legal system. In the thirteenth century, the only form of recourse available to a plaintiff that had been wronged was to petition the King asking for relief against an unfair judgment. Initially, all such petitions were dealt with directly by the King but as the number of requests increased the Lord Chancellor has delegated the task of determining which petitions should succeed and which had to fail.

Up until 1529 none of the appointed Lord Chancellors had had any form of legal training. Given this lack of lega...
8 Pages (2000 words) Coursework

Community life has its advantages but also has its limitations to the members and the outsiders.
“The good things we secure for ourselves are uncertain and precious until it is secured for everyone and incorporated into our common life.”-Jane Addams. With society moving faster and more detached to technology, busy schedules, and job changes, it becomes harder and harder to feel a sense of community. This can result in a life of solitude and a lose a sense of belonging. Community life helps extract people out of this solitude life and introduce better, challenging and fun tasks such as participation in acts of kindness. It also provides room for volunteering, meeting neighbors, discussing important issues with othe...
7 Pages (1750 words) Case Study
sponsored ads
Save Your Time for More Important Things
Let us write or edit the essay on your topic "The Top Three Issues Relating to the Doctrine of God that Evangelical Christians Need to Address in the Church and in the Academy" with a personal 20% discount.
GRAB THE BEST PAPER

Let us find you another Essay on topic The Top Three Issues Relating to the Doctrine of God that Evangelical Christians Need to Address in the Church and in the Academy for FREE!