Comments (0)
Add to wishlist Delete from wishlist
Cite this document
Summary
This study discusses the significance of the issue of classic theology vs. the contemporary discussion regarding the immutability of God. The acts of God within the sphere of his creation are not seen as arbitrary and his response to people is within the context of his “desires and purposes of holy love…
Download full paper File format: .doc, available for editing
HIDE THIS PAPERGRAB THE BEST PAPER91.1% of users find it useful 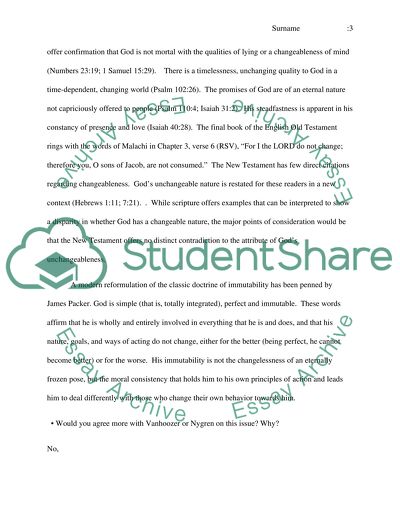 Extract of sample "Classic Theology vs. The Contemporary"

Download file to see previous pages His judgment of people is conditioned on his “changeless purpose concerning sin and conversion.  The scriptural embodiment of the doctrine of immutability is probably captured best in 1 Samuel 15:29 (RSV) where it is written, “And also the Glory of Israel will not lie or repent; for he is not a man, that he should repent.” The scriptural basis of the doctrine of Immutability is fully developed with numerous citations and succinct specificity to unchangeableness that enlightens the doctrine. Scriptures offer confirmation that God is not mortal with the qualities of lying or a changeableness of mind (Numbers 23:19; 1 Samuel 15:29). There is a timelessness, unchanging quality to God in a time-dependent, changing world (Psalm 102:26). The promises of God are of an eternal nature not capriciously offered to people (Psalm 110:4; Isaiah 31:2). His steadfastness is apparent in his constancy of presence and love (Isaiah 40:28). The final book of the English Old Testament rings with the words of Malachi in Chapter 3, verse 6 (RSV), “For I the LORD do not change; therefore you, O sons of Jacob, are not consumed.” The New Testament has few direct citations regarding changeableness. God’s unchangeable nature is restated for these readers in a new context (Hebrews 1:11; 7:21). While scripture offers examples that can be interpreted to show a disparity in whether God has a changeable nature, the major points of consideration would be that the New Testament offers no distinct contradiction to the attribute of God’s unchangeableness. A modern reformulation of the classic doctrine of immutability has been penned by James Packer. God is simple (that is, totally integrated), perfect and immutable. These words affirm that he is wholly and entirely involved in everything that he is and does and that his nature, goals, and ways of acting do not change, either for the better (being perfect, he cannot become better) or for the worse. His immutability is not the changelessness of an eternally frozen pose, but the moral consistency that holds him to his own principles of action and leads him to deal differently with those who change their own behavior towards him. • Would you agree more with Vanhoozer or Nygren on this issue? Why? No, They state, “…from Plato, Aristotle, and the subsequent Hellenistic tradition, the church arrived at the notion that God was altogether unmoved, impassible, immutable, nontemporal and purely actual.” Open theists uniformly teach that the church fathers were so influenced by Greek philosophy when they formulated their theology, that the church’s historical and theological understanding of God reflects a more philosophical understanding than a biblical one. Carl Henry rightfully noted, “It is true that medieval theologians were aware of the teaching of certain Greek philosophers in discussing God’s immutability. ...Download file to see next pages Read More
Share:
Tags
Cite this document
(“Midterm Exam: Essay Example | Topics and Well Written Essays - 1000 words”, n.d.)
Midterm Exam: Essay Example | Topics and Well Written Essays - 1000 words. Retrieved from https://studentshare.org/religion-and-theology/1474050-midterm-exam-essay

CHECK THESE SAMPLES OF Classic Theology vs. The Contemporary

As Levitas (2006, 17) remarks, the definition of social exclusion in terms simply of unemployment obscures poverty among aged women who are economically inactive and in old age. Women earn less than men on average during their working lives and have a longer period of life expectancy in old age. Poverty among elderly women has been linked in a number of studies to pension schemes designed for men working continuously and full-time (Arber & Ginn, 2001, 7) and to women having to live on state rather than occupational pensions, and for more years than men (Wenger, 2005, 65). Women are responsible for the major share of unpaid work in a way that constrains their ability to sell their labor in the market place. They comprise the ma...
7 Pages (1750 words) Coursework

The issues discussed in Table 1, are framed in accordance with the situations discussed in the case of Classic Airlines. The organization is facing problems on account of steadily declining share prices as well as a simultaneous increase in the fuel prices and labor costs. This is a serious issue faced by management. Also the customer satisfaction is on a decline leading to further complications in the given scenario. The management is now faced with a dilemma of resorting to cost-cutting and has contemplated the implementation of automated customer care systems but the customers have expressed desire of availing the facility of being able to talk to a real person instead. This is further adding to the management’s troubles....
8 Pages (2000 words) Term Paper

Erving Goffman was an astute observer of society, who immersed himself in the social environment which he was studying. He carefully observed and recorded the ways in which people’s behavior and interpersonal interactions are carried out in everyday life. He notes that “people perform their social roles and, as they do so, they produce social order through their actions and the regu...
6 Pages (1500 words) Article
sponsored ads
Save Your Time for More Important Things
Let us write or edit the case study on your topic "Classic Theology vs. The Contemporary" with a personal 20% discount.
GRAB THE BEST PAPER

Let us find you another Case Study on topic Classic Theology vs. The Contemporary for FREE!