Review: 30 Days to understanding the Bible in 15 minutes a day, by Max Anders - Book Report/Review Example 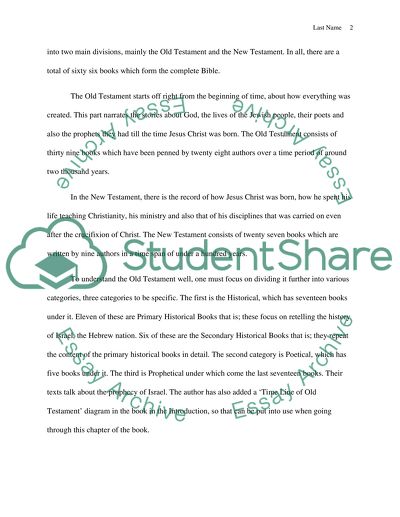 Extract of sample "Review: 30 Days to understanding the Bible in 15 minutes a day, by Max Anders"

Download file to see previous pages He is also the original developer as well of the general editor of The Holman New Testament Commentary. This book is divided into three sections; each of them being further branched out into chapters, which further have sub chapters. This is to give the reader the complete summary of the contents of the Bible in a concise and organized manner. But at the same time, Max Anders makes sure not to skip out on any important material. The first section is titled ‘The Story of the Old Testament’. This part has sixteen chapters which cover in around a hundred pages in total. The first chapter is called ‘The Structure of the Bible’ in which the author starts off with talking about how the Bible can be very easily divided into two main divisions, mainly the Old Testament and the New Testament. In all, there are a total of sixty six books which form the complete Bible. The Old Testament starts off right from the beginning of time, about how everything was created. This part narrates the stories about God, the lives of the Jewish people, their poets and also the prophets they had till the time Jesus Christ was born. The Old Testament consists of thirty nine books which have been penned by twenty eight authors over a time period of around two thousand years. In the New Testament, there is the record of how Jesus Christ was born, how he spent his life teaching Christianity, his ministry and also that of his disciplines that was carried on even after the crucifixion of Christ. The New Testament consists of twenty seven books which are written by nine authors in a time span of under a hundred years. To understand the Old Testament well, one must focus on dividing it further into various categories, three categories to be specific. The first is the Historical, which has seventeen books under it. Eleven of these are Primary Historical Books that is; these focus on retelling the history of Israel, the Hebrew nation. Six of these are the Secondary Historical Books that is; they repeat the content of the primary historical books in detail. The second category is Poetical, which has five books under it. The third is Prophetical under which come the last seventeen books. Their texts talk about the prophecy of Israel. The author has also added a ‘Time Line of Old Testament’ diagram in the book in the Introduction, so that can be put into use when going through this chapter of the book. Similarly, the New Testament can also be divided into three types of books. The first one is Historical and this consists of the first five books. The matter in these texts is about the four gospels and also the book of Acts, including the story on Jesus and the Church. To understand the whole New Testament properly, it is necessary to read these five books. The second category is Pauline Epistles which has the next thirteen books in it; nine of these are to the Churches and the next four of them to the Individuals. These books have letters which were once penned by Paul who was one of the apostles. The third one is General Epistles, which has the last nine books in it. These books are a compilation of letters which were once addressed to certain individuals and congregations by various people. Both the epistles mostly give out instructions on the Christian doctrine and the lifestyle a believer should follow. The second chapter is called ‘ ...Download file to see next pages Read More
Share:
Tags
Cite this document
(“Book review: 30 Days to understanding the Bible in 15 minutes a day, Report/Review”, n.d.)
Retrieved from https://studentshare.org/religion-and-theology/1402381-12-pages-of-book-review-30-days-to-understanding-the-bible-in-15-minutes-a-day-by-max-anders

(Book Review: 30 Days to Understanding the Bible in 15 Minutes a Day, Report/Review)
https://studentshare.org/religion-and-theology/1402381-12-pages-of-book-review-30-days-to-understanding-the-bible-in-15-minutes-a-day-by-max-anders.

“Book Review: 30 Days to Understanding the Bible in 15 Minutes a Day, Report/Review”, n.d. https://studentshare.org/religion-and-theology/1402381-12-pages-of-book-review-30-days-to-understanding-the-bible-in-15-minutes-a-day-by-max-anders.
Comments (0)
Click to create a comment or rate a document

CHECK THESE SAMPLES OF Book review: 30 Days to understanding the Bible in 15 minutes a day, by Max Anders

Apart from staying at home and looking after their daughter, Sally has redecorated the house and laid a patio in the back garden. She has also, from the surplus £5,000, paid for a re-wiring of the entire house and the installation of some more radiators
Two years ago, Sally’s widowed mother, Molly, came to live with them. Because the house was too small, Molly paid for an extension to be built, to provide a separate bedroom and bathroom for herself. The extension increased the value of the house by £30,000.
You are a trainee in the firm of solicitors consulted by Harry. Your principal has asked you to research and prepare a short report (of not more than 1,000 words) outlining the legal principles as to...
8 Pages (2000 words) Case Study

The focus of this exposition is the book of Isaiah chapter 61: 1-11.  The King James Version of the Bible is used as well as the Judaica Press Complete Tanach Yeshayahu Chapter 61.  The Jewish Publication Society Tanach (1917) is also used.  Lastly, Rashi’s commentary is referred to as well.  It is worthy of mention that both the Jewish and Christian perspectives are explored here and that, in the true essence of research, one is not favored over the other.  Isaiah Ben Amoz was considered a prophet in his time. He was known to predict the deliverance of Jerusalem from the Assyrians. Jerusalem was freed from the control of the Assyrians in 701 B.C. which added to his credibility as a prophet. The whol...
13 Pages (3250 words) Research Proposal

Speech is very powerful. With its help, humans can narrate events, and draw pictures so vivid and great that listeners are astonished. With th...
10 Pages (2500 words) Term Paper

In the case of the severity of Job’s trials, it is beyond the term understatement to say that what Job went through simply for a test, was supreme overkill. The stipulation placed by God was that he was to be turned over to Satan but just not killed. It seems that God should already know if Job is truly a faithful follower as opposed to putting h...
6 Pages (1500 words) Book Report/Review

They, therefore, believe that internal and external factors affect the chances of a person being subject to a crime. The situation at which a person commits a crime also forms the basis of the determinist approach of causes of crimes.
Several theories elaborate on the factors that dispose of different people toward crimes. The classical theory explains that crimes occur when their benefits outdo the costs or consequences of the crime. The theory of Routine Activities suggests that a crime likely occurs if a motivated offender finds an attractive target and no appropriate guardianship in place. Various biological factors also influence the causes of crimes as evident in the discussion.
One of the major assumptions of the...
8 Pages (2000 words) Term Paper
sponsored ads
Save Your Time for More Important Things
Let us write or edit the book report/review on your topic "Book review: 30 Days to understanding the Bible in 15 minutes a day, by Max Anders" with a personal 20% discount.
GRAB THE BEST PAPER

Let us find you another Book Report/Review on topic Book review: 30 Days to understanding the Bible in 15 minutes a day, by Max Anders for FREE!