Comments (0)
Add to wishlistDelete from wishlist
Cite this document
Summary
In the paper “Buddha and Buddhism based on the Journey to the West by Wu Cheng’en” the author analyzes a classical novel of the Chinese literature. This classical novel has a firm foundation on the Chinese mythology, value system and folk religions which are reflected on religious way of life…
Download full paperFile format: .doc, available for editing
HIDE THIS PAPERGRAB THE BEST PAPER95.3% of users find it useful 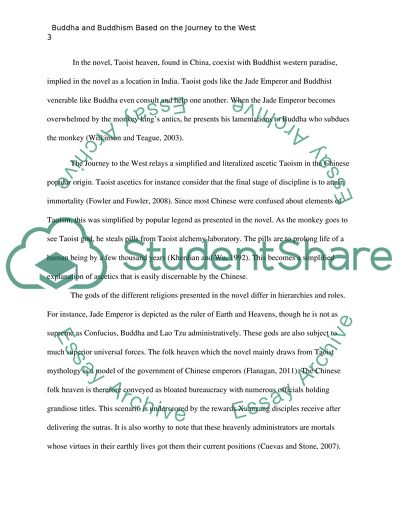 Download file to see previous pages The reward is that they get admitted back to heaven. This description is in tandem with Christian principles of faith (Miller, 2006). Another depiction of Christianity is from the monkey king who eats the holy peaches. Like forbidden fruits portrayed in the bible, the monkey king eats these fruits reserved for special guest to heaven. He gets enlightened and for his acts, he is kicked out of the Heavenly Garden. A symbolic representation of what unfolded in the Garden of Eden (Miller, 2006).

In the novel, Taoist heaven, found in China, coexist with Buddhist western paradise, implied in the novel as a location in India. Taoist gods like the Jade Emperor and Buddhist venerable like Buddha even consult and help one another. When the Jade Emperor becomes overwhelmed by the monkey king’s antics, he presents his lamentations to Buddha who subdues the monkey (Wilkinson and Teague, 2003).
The Journey to the West relays a simplified and literalized ascetic Taoism in the Chinese popular origin. Taoist ascetics for instance consider that the final stage of discipline is to attain immortality (Fowler and Fowler, 2008). Since most Chinese were confused about elements of Taoism, this was simplified by popular legend as presented in the novel. As the monkey goes to see Taoist god, he steals pills from Taoist alchemy laboratory. The pills are to prolong life of a human being by a few thousand years (Kherdian and Wu, 1992). This becomes a simplified explanation of ascetics that is easily discernable by the Chinese.
The gods of the different religions presented in the novel differ in hierarchies and roles. For instance, Jade Emperor is depicted as the ruler of Earth and Heavens, though he is not as supreme as Confucius, Buddha and Lao Tzu administratively. These gods are also subject to much superior universal forces. The folk heaven which the novel mainly draws from Taoist mythology is a model of the government of Chinese emperors (Flanagan, 2011). The Chinese folk heaven is therefore conveyed as bloated bureaucracy with numerous officials holding grandiose titles. This scenario is underscored by the rewards Xuanzang disciples receive after delivering the sutras. It is also worthy to note that these heavenly administrators are mortals whose virtues in their earthly lives got them their current positions (Cuevas and Stone, 2007). The different religions in Journey to the West find a striking balance and try to accommodate one another (Buswell, 1990). They are not into direct competition with one another. Buddha helps Jade Emperor when he is besieged by the monkey king, whereas Bodhisattva Kwan Yin plays an important role in the novel by helping the pilgrims when on very difficult situations. Although the disciples are promoted to heaven, Xuanzang remains on earth to translate the sutras. ...Download file to see next pagesRead More
Share:
Cite this document
(“Buddha and the Buddhism based on the Journey to the West by Wu Chengen Research Paper”, n.d.)
Retrieved from https://studentshare.org/religion-and-theology/1398218-buddha-and-the-buddhism-based-on-the-journey-to-the-west-by-wu-chengen

(Buddha and the Buddhism Based on the Journey to the West by Wu Chengen Research Paper)
https://studentshare.org/religion-and-theology/1398218-buddha-and-the-buddhism-based-on-the-journey-to-the-west-by-wu-chengen.

“Buddha and the Buddhism Based on the Journey to the West by Wu Chengen Research Paper”, n.d. https://studentshare.org/religion-and-theology/1398218-buddha-and-the-buddhism-based-on-the-journey-to-the-west-by-wu-chengen.
Comments (0)
Click to create a comment or rate a document

The Forgotten War in West Virginia

Not many people anymore have any idea what happened to these miners, which is puzzling since the term “redneck” is so common in today’s vernacular. This is unfortunate, as many of the current union laws are a direct result of this conflict. It all began in West Virginia when the coal industry began to blossom in 1883. From there, immigrants and locals were employed to work mines as the demand for coal became paramount to the economy. A dispute began to mount between mine owners and the miners that worked for them. “From the time the first shovelful of coal was removed in West Virginia, the men who did the mining were exploited by those who owned the mineral” (Meador). The owners were often very unfair...
12 Pages(3000 words)Term Paper

The economy of the West grew because of many factors. Sugar, slave trade, and silver played an important role in economic development as we...
7 Pages(1750 words)Essay

The statistics also indicate that the total number of deaths was 12,941 with the white population encompassing 11,595 and the black 1 162. These statistics show that the rate of birth is higher than the rate of deaths i.e. 10.4% to 9.7%.
The county government enhances the health of the residents, including the youth through collaborating with the health care providers and other organizations involved in catering for the welfare of the community. According to CityData.com (2012), some of the health care services provided by hospitals to the county residents include Acute Care, Proprietary, emergency service, and veterans administration. The social welfare is enhanced by non-governmental organizations, especially those involved...
6 Pages(1500 words)Coursework
sponsored ads
Save Your Time for More Important Things
Let us write or edit the research paper on your topic "Buddha and the Buddhism based on the Journey to the West by Wu Chengen" with a personal 20% discount.
GRAB THE BEST PAPER

Let us find you another Research Paper on topic Buddha and the Buddhism based on the Journey to the West by Wu Chengen for FREE!