Comments (0)
Add to wishlistDelete from wishlist
Cite this document
Summary
Thus, divorce is not a problem of a husband and a wife; it is a problem of the whole society. Thus, it is necessary to reveal the main causes of divorce ad its psychological effect in order to provide people, who…
Download full paperFile format: .doc, available for editing
HIDE THIS PAPERGRAB THE BEST PAPER99% of users find it useful 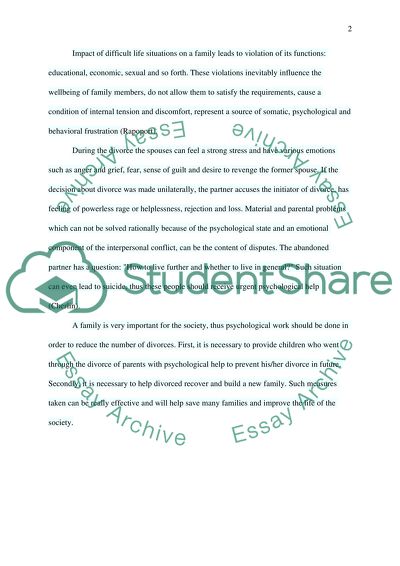 Psychological effect and causes of divorce A family is a unit of society that plays a very important role. Thus, divorce is not a problem of a husband and a wife; it is a problem of the whole society. Thus, it is necessary to reveal the main causes of divorce ad its psychological effect in order to provide people, who went through this in their life, with necessary psychological help.
Family life is not always a source of pleasure. It cant always proceed without any problems as there are many family difficulties. Unfortunately, not every family can cope with them. The psychological reasons of divorce, as a rule, are anyway connected with the feeling of dissatisfaction with marriage of one or the both spouses (Swarns).
Various opinion polls showed that any divorce, even desired one brings a serious psychological trauma to both spouses. Problems, which stand before getting divorced, are related to such aspects of life as the division of property, creation of new relationship with friends, relatives and children, formations of the new attitude to life, job search.
The main reasons of divorce are usually the following: long matrimonial conflicts, discontent with the distribution of matrimonial roles and duties, material and household problems, alcoholism of one of spouses, adultery. It is determined that those people who went through the divorce of their parents in their childhood, very often divorce with their spouses. This can be the consequence by the psychological trauma received in childhood when the parents decided to destroy the family (Amato & Sobolewski).
Impact of difficult life situations on a family leads to violation of its functions: educational, economic, sexual and so forth. These violations inevitably influence the wellbeing of family members, do not allow them to satisfy the requirements, cause a condition of internal tension and discomfort, represent a source of somatic, psychological and behavioral frustration (Rapoport).
During the divorce the spouses can feel a strong stress and have various emotions such as anger and grief, fear, sense of guilt and desire to revenge the former spouse. If the decision about divorce was made unilaterally, the partner accuses the initiator of divorce, has feeling of powerless rage or helplessness, rejection and loss. Material and parental problems which can not be solved rationally because of the psychological state and an emotional component of the interpersonal conflict, can be the content of disputes. The abandoned partner has a question: "How to live further and whether to live in general?" Such situation can even lead to suicide, thus these people should receive urgent psychological help (Cherlin).
A family is very important for the society, thus psychological work should be done in order to reduce the number of divorces. First, it is necessary to provide children who went through the divorce of parents with psychological help to prevent his/her divorce in future. Secondly, it is necessary to help divorced recover and build a new family. Such measures taken can be really effective and will help save many families and improve the life of the society.
Works Cited
Amato P. R.; Sobolewski, J. M. "The effects of divorce and marital discord on adult childrens psychological well-being" (PDF). American Sociological Review 66, 2001
Rapoport, Yossef. Marriage, Money and Divorce in Medieval Islamic Society. Cambridge University Press, 2005, p. 2.
Cherlin, AJ. Marriage, Divorce, and Remarriage. Cambridge, MA: Harvard University Press, 1992, p. 142.
Swarns, Rachel L. "More Americans Rejecting Marriage in 50s and Beyond". The New York Times, 2002. Read More
Share:
Tags
Cite this document
(“Divorce: Causes, Psychological Impact Research Paper”, n.d.)
Divorce: Causes, Psychological Impact Research Paper. Retrieved from https://studentshare.org/psychology/1698452-divorce-causes-psychological-impact

The Causes of Psychological Diseases

...﻿The Causes of Psychological Diseases People often contemplate about the causes of diseases. There are different perspectives and theories about human health. Some people believe that we are what we eat, others think that the environment influences, while others belief in the hereditary nature of disease. The field of psychology developed a model called the multifactorial model. “The multifactorial model proposes that most health problems have an interconnecting set of causes rather than one distinct cause” (Scarlett, 2010). Based on this model there is no one single cause for a disease since multiple factors...
4 Pages(1000 words)Essay

The Impact of Divorce

...The Impact of Divorce Divorce causes mental anguish which contributes to psychological issues for bothparties and their children. Depression is a common result of divorce, a condition that initiates a variety of other health concerns. The more contentious the relationship and consequential separation, the worse for all concerned but the children may be most negatively affected. The potentially traumatic event of divorce and the years of distress that follows occur during their developmental years and could potentially cause psychological trauma that affects their lives for many years to...
8 Pages(2000 words)Research Paper

Causes and Effects of Divorce

...emotions during and after divorce. Summing up, this much becomes clear from the above discussion that in a working marital relationship, both men and women try to sort out various matters compassionately and lovingly, while taking care to protect each others’ esteems. Divorce results when even the most normal type of conversations are more than often followed by bitter criticism and violent physical attacks on each other. The effects of divorce produced on both men and women are extraordinarily devastating because many bitter emotions and psychological pressures follow after a divorce is finalized. Works cited: “EFFECTS OF DIVORCE.”...
3 Pages(750 words)Essay

...Reiners English 101 26 September Divorce While researching literature on divorce, I found that fifty percent of all marriages in the United States end in divorce. Also, sixty-seven per cent of second marriages are unsuccessful and end in divorce (Corcoran, “Psychological and Emotional Aspects of Divorce”). These numbers illustrate how important the problem of divorce is today. My goal in this paper is to discuss different kinds of divorce, explore the religious (Christian and Catholic) views surrounding divorce and reveal psychological problems after...
4 Pages(1000 words)Research Paper

..., which pervert a perception of other people in a pejorative manner. Prejudice shapes perverted attitudes of one group people to another and discrimination shapes inappropriate behaviors from one group of people to another. On the background of this type of artificially cruel attitudes of one group of people to another, it is very difficult for ethnic minority groups, elderly people, religious groups and others to experience a constant oppression of the dominant groups. It is necessary to take into account different types of behaviors and outline potential impacts of prejudiced behavior, racism or discrimination in order to find out potential psychological hazards both for the oppressors and the...
5 Pages(1250 words)Research Paper

The Impact of Divorce

...from adverse consequences of stress linked to their parent’s matrimonial changes (Bridges and Insabella 167). The stress and social economic disadvantage perspective underscores that matrimonial changes causes a sequence of negative economic and social changes, pressure, and complications that can affect the comfort of parents and children. Divorce makes it hard for custodial mothers with no jobs to raise their children. Remarrying, alternatively, eases the economic burden for single mothers (Bridges and Insabella 168). Divorce effectually cuts off one generation from another. Children are brought up without the presence of the mother or father. This may have adverse effects on the...
2 Pages(500 words)Assignment

...Divorce: Causes and Impact on Children Introduction In this era of modernization, the issue of increasing rate of divorce is becoming a matter of grave social concern and has become a topic of discussion in all kinds of media. It is a grave issue since the impact of divorce is strong on any individual, especially on the children of the divorced couples. It has been seen that the negatives effects of divorce on children can be both short term which are less harmful and also long term causing psychological and behavioral problems. Their education also gets affected as they...
6 Pages(1500 words)Research Paper

...their conflicts with their fathers fade away paving away for life with less conflicts with their divorced fathers. There is also no doubt, fathers who divorce with their wives will have less opportunities of supporting their children emotionally and financially as compared to when the family is intact. They undergo psychological changes that naturally render them less caring and increase their likelyhood of drifting away from kids especially if they are legally denied custodial roles on their own children on divorce. Being away from the children, these fathers also are deprived of the opportunity of influencing behavior and attitude in their children. This is a reality...
9 Pages(2250 words)Research Paper

...Divorce refers to the legal process of marriage termination by a judge. Outlining the causes, effects and solution to divorce, this paper appreciates that divorce process could be for the good thus beneficial to either or both parties involved but that such benefits are outweighed by the negative effects. Basic incompatibility, financial disagreement, infidelity, domestic violence and addictions will be evaluated as the common causes of divorce. Whereas divorce could provide solution to unfulfilling marriages, it will be noted that negative emotional, physical and socioeconomic consequences are usually unavoidable. Thus,...
8 Pages(2000 words)Essay

...Divorce Causes in Saudi Arabia Divorce Causes in Saudi Arabia According to Commins p73), “A study in Saudi Arabia revealed that the total divorce cases recorded in 2012 were more than 30,000, which was an average of 82 (divorces) a day”. Reports also indicate that in the previous year, there were at least four instances of “khula”, in which the wife asks her husband for a divorce for return of dowry paid and a specific amount of money agreed upon with her husband. In addition, at least 66% of all divorce cases in Saudi Arabia occur within the first year. Eligibility for marriage in Saudi Arabia begins...
4 Pages(1000 words)Research Paper
sponsored ads
Save Your Time for More Important Things
Let us write or edit the research paper on your topic "Divorce: Causes, Psychological Impact" with a personal 20% discount.
GRAB THE BEST PAPER

Let us find you another Research Paper on topic Divorce: Causes, Psychological Impact for FREE!