Comments (0)
Add to wishlistDelete from wishlist
Cite this document
Summary
Running head: social psychology Social Influences on Behavior Date Social psychology supports the fact that human behavior is greatly influenced by other people, or the people involved in the interaction, and the situation. The social psychological perspective thus relates to the aspects that result from presence of others, which cause certain behaviors and actions to be produced by individuals…
Download full paperFile format: .doc, available for editing
HIDE THIS PAPERGRAB THE BEST PAPER91.7% of users find it useful 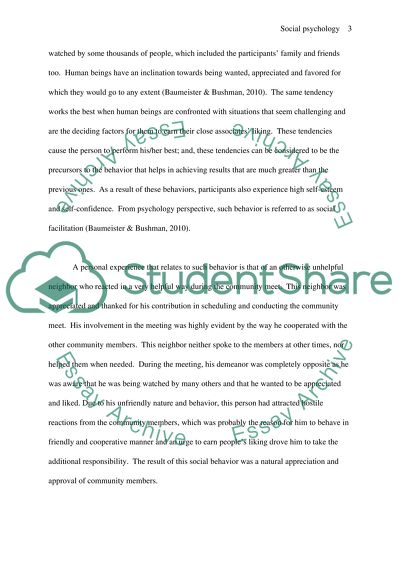 Download file to see previous pages Human interactions and behavior in a social situation can be multifaceted in terms of the outcomes. In social situations, these interactions can either bring about better, lower or distorted outcomes or actions from the individual or the group. In this discussion, influence of social situation on human behavior will be examined and two specific social psychological phenomena will be studied in brief. Further, reasons for these behaviors along with the outcomes associated with the behaviors will be assessed before concluding with key findings. Human beings tend to perform better when in a group, and even better when they are being watched and are being chased. This is probably the reason for many organizations to adopt the team working concept and also doing the performance measurement. When people are in a sort of competition with each other, they tend to perform more than what they would when they are working to achieve specific targets. The most prominent example of such behavior can be seen in any sports activity. In a sports event, such as a car race, the participants tend to drive at much greater speeds than they could during the practice sessions; this is because they had to achieve what they desired for and also because they were being watched by some thousands of people, which included the participants’ family and friends too. Human beings have an inclination towards being wanted, appreciated and favored for which they would go to any extent (Baumeister & Bushman, 2010). The same tendency works the best when human beings are confronted with situations that seem challenging and are the deciding factors for them to earn their close associates’ liking. These tendencies cause the person to perform his/her best; and, these tendencies can be considered to be the precursors to the behavior that helps in achieving results that are much greater than the previous ones. As a result of these behaviors, participants also experience high self-esteem and self-confidence. From psychology perspective, such behavior is referred to as social facilitation (Baumeister & Bushman, 2010). A personal experience that relates to such behavior is that of an otherwise unhelpful neighbor who reacted in a very helpful way during the community meet. This neighbor was appreciated and thanked for his contribution in scheduling and conducting the community meet. His involvement in the meeting was highly evident by the way he cooperated with the other community members. This neighbor neither spoke to the members at other times, nor helped them when needed. During the meeting, his demeanor was completely opposite as he was aware that he was being watched by many others and that he wanted to be appreciated and liked. Due to his unfriendly nature and behavior, this person had attracted hostile reactions from the community members, which was probably the reason for him to behave in friendly and cooperative manner and an urge to earn people’s liking drove him to take the additional responsibility. The result of this social behavior was a natural appreciation and approval of community members. Another human interaction that occurs in social situations in the absence of any one of the essential elements is the process of social loafing. Social loafing occurs when the individuals interacting do not possess the ...Download file to see next pagesRead More
Share:
Tags
Cite this document
(“Social Influences on Behavior Essay Example | Topics and Well Written Essays - 1000 words”, n.d.)
Social Influences on Behavior Essay Example | Topics and Well Written Essays - 1000 words. Retrieved from https://studentshare.org/psychology/1458103-social-influences-on-behavior
(Social Influences on Behavior Essay Example | Topics and Well Written Essays - 1000 Words)
Social Influences on Behavior Essay Example | Topics and Well Written Essays - 1000 Words. https://studentshare.org/psychology/1458103-social-influences-on-behavior.
“Social Influences on Behavior Essay Example | Topics and Well Written Essays - 1000 Words”, n.d. https://studentshare.org/psychology/1458103-social-influences-on-behavior.
Comments (0)
Click to create a comment or rate a document

CHECK THESE SAMPLES OF Social Influences on Behavior

Erving Goffman was an astute observer of society, who immersed himself in the social environment which he was studying. He carefully observed and recorded the ways in which people’s behavior and interpersonal interactions are carried out in everyday life. He notes that “people perform their social roles and, as they do so, they produce social order through their actions and the regu...
6 Pages(1500 words)Article
sponsored ads
Save Your Time for More Important Things
Let us write or edit the essay on your topic "Social Influences on Behavior" with a personal 20% discount.
GRAB THE BEST PAPER

Let us find you another Essay on topic Social Influences on Behavior for FREE!