Comments (0)
Add to wishlist Delete from wishlist
Cite this document
Summary
The Republic of Trinidad and Tobago, situated 11 Km. off the coast of Venezuela in the southern Caribbean Sea, is an archipelagic country consisting of two main islands Trinidad and Tobago and 21 other smaller islands. While the largest populated island is Trinidad, Tobago continues to remain the less populated area…
Download full paper File format: .doc, available for editing
HIDE THIS PAPERGRAB THE BEST PAPER98.2% of users find it useful 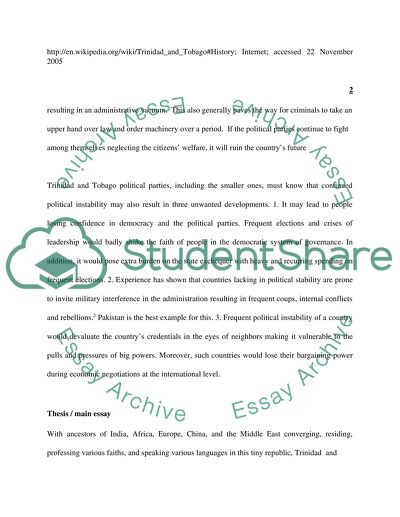 Download file to see previous pages It is widely known for its natural beauties, tourist locations, and attractive sceneries. The country's capital city is Port -of -Spain, which has staked its claim to serve as the headquarters of the permanent secretariat of the Free Trade Area of the Americas.1
Everything is good for this country, which has seen several vicissitudes in relation to its economy, except for its instable political conditions. Backed by a strong multicultural, multiethnic and multi religious society, the democracy of Trinidad and Tobago has been undergoing several phases of political instability for the last decade-and-a-half seriously posing a threat to its economy in the long run. As the frequent political instability takes away the valuable time of the political parties, they find less and less time to concentrate on Governmental matters
resulting in an administrative vacuum. This also generally paves the way for criminals to take an upper hand over law and order machinery over a period. If the political parties continue to fight among themselves neglecting the citizens' welfare, it will ruin the country's future
Trinidad and Tobago political parties, including the smaller ones, must know that continued political instability may also result in three unwanted developments. 1. It may lead to people losing confidence in democracy and the political parties. ...
1. It may lead to people losing confidence in democracy and the political parties. Frequent elections and crises of leadership would badly shake the faith of people in the democratic system of governance. In addition, it would pose extra burden on the state exchequer with heavy and recurring spending on frequent elections. 2. Experience has shown that countries lacking in political stability are prone to invite military interference in the administration resulting in frequent coups, internal conflicts and rebellions.2 Pakistan is the best example for this. 3. Frequent political instability of a country would devaluate the country's credentials in the eyes of neighbors making it vulnerable to the pulls and pressures of big powers. Moreover, such countries would lose their bargaining power during economic negotiations at the international level.
Thesis / main essay
With ancestors of India, Africa, Europe, China, and the Middle East converging, residing, professing various faiths, and speaking various languages in this tiny republic, Trinidad and
------------------------------------------------------------------------------------------------
2 What drives violent conflict available from
http://www.strategy.gov.uk/downloads/work_areas/countries_at_risk/1factors.pdf; Internet; accessed 22 November 2005

3
Tobago mercifully presents a picture of 'unity in diversity'. During the 1990s, social awareness on the issues of harmony and coexistence had grown into wider proportions among various sections of Trinidad and Tobago people. As a country hosting residence to people of several races and groups, this nation has transformed itself into a symbol of co- existence and peaceful living. As per the information provided in the Wikipedia, ...Download file to see next pages Read More
Share:
Tags
Cite this document
(“Social Democratic and Economic Progress in the Republic of Trinidad Essay”, n.d.)
Retrieved from https://studentshare.org/politics/1499395-social-democratic-and-economic-progress-in-the-republic-of-trinidad-and-tobago-between-19902005

(Social Democratic and Economic Progress in the Republic of Trinidad Essay)
https://studentshare.org/politics/1499395-social-democratic-and-economic-progress-in-the-republic-of-trinidad-and-tobago-between-19902005.

“Social Democratic and Economic Progress in the Republic of Trinidad Essay”, n.d. https://studentshare.org/politics/1499395-social-democratic-and-economic-progress-in-the-republic-of-trinidad-and-tobago-between-19902005.
Comments (0)
Click to create a comment or rate a document

The said declaration contained the short-term (classified as immediate actions) and medium-term actions that the G20 members think should be done to achieve true financial reforms. As part of the medium-term actions, the declaration states that “the key global accounting standard bodies should work intensively toward the objective of creating a single set of high-quality global standard”. It also stated that “regulators, supervisors, and accounting standard setters, as appropriate, s...
9 Pages (2250 words) Lab Report

The phenomenon of globalization of markets has resulted in both advantages and disadvantages. It has resulted in the convergence in the requirement of features in a product and augmentation of the intensity of B2B and B2C communica...
7 Pages (1750 words) Coursework

... this would also boost the participation rates and thus help to achieve the desired research results (Sugarman, 2002). The management of an institution has the sole responsibility of setting up the IRB and to make sure that no kind of prejudice is shown by the members of the IRB towards a particular study due to financial or other pressures as this would result in overlooking certain aspects of the study which may prove fatal as the study progresses. They also have to ensure that incidences such as death should be immediately reported to the federal agencies involved in the funding (The Ethics of Social Research, n.d). It is also the responsibility of the management to ensure the well-being of the IRB members and that they are being...
7 Pages (1750 words) Essay
sponsored ads
Save Your Time for More Important Things
Let us write or edit the essay on your topic "Social Democratic and Economic Progress in the Republic of Trinidad and Tobago between 19902005" with a personal 20% discount.
GRAB THE BEST PAPER

Let us find you another Essay on topic Social Democratic and Economic Progress in the Republic of Trinidad and Tobago between 19902005 for FREE!