Explain Gandhi's contention that external independence (swaraj) depends upon internal swaraj. Do you think his reasoning is correct why or why not - Essay Example

Comments (1)
Add to wishlistDelete from wishlist
Cite this document
Summary
Gandhi clarifies the meaning of swaraj by asserting that it is the government of India that is elected by the adult majority whether male or female, regardless of whether native or…
Download full paperFile format: .doc, available for editing
HIDE THIS PAPERGRAB THE BEST PAPER98.8% of users find it useful 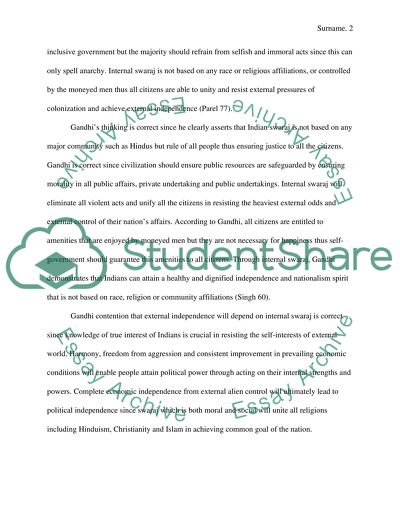 Extract of sample "Explain Gandhi's contention that external independence (swaraj) depends upon internal swaraj. Do you think his reasoning is correct why or why not"

Gandhi’s contention that external independence depends on internal swaraj Introduction Mahatma Gandhi contents that external independence (swaraj) depends on the internal swaraj. Gandhi clarifies the meaning of swaraj by asserting that it is the government of India that is elected by the adult majority whether male or female, regardless of whether native or domiciled and all who have contributed to their manual labor to the nation or even taken the trouble to register as voters. Gandhi clearly demonstrates that the nation will achieve self-restraint and self-rule by education of the masses in order to achieve self-regulation and ability to control authority. All citizens should enjoy the fruits of their labor and enjoy their human rights and freedoms (Singh 14).
Gandhi’s thinking contention that external independence will depend on internal swaraj is correct. First and foremost, self-government ability should depend on internal strengths and ability to resist all odds. Political self-government which is not sustainable is not worth its name and thus external swaraj will be attained by attaining internal swaraj. According to Gandhi, internal swaraj forms the basis of civilization and internal strengths can only be maintained when the masses remain patriotic in achieving the national goals and good which are above any personal considerations such as personal profit. Gandhi is correct to assert that swaraj is an inclusive government but the majority should refrain from selfish and immoral acts since this can only spell anarchy. Internal swaraj is not based on any race or religious affiliations, or controlled by the moneyed men thus all citizens are able to unity and resist external pressures of colonization and achieve external independence (Parel 77).
Gandhi’s thinking is correct since he clearly asserts that Indian swaraj is not based on any major community such as Hindus but rule of all people thus ensuring justice to all the citizens. Gandhi is correct since civilization should ensure public resources are safeguarded by ensuring morality in all public affairs, private undertaking and public undertakings. Internal swaraj will eliminate all violent acts and unify all the citizens in resisting the heaviest external odds and external control of their nation’s affairs. According to Gandhi, all citizens are entitled to amenities that are enjoyed by moneyed men but they are not necessary for happiness thus self-government should guarantee this amenities to all citizens. Through internal swaraj, Gandhi demonstrates that Indians can attain a healthy and dignified independence and nationalism spirit that is not based on race, religion or community affiliations (Singh 60).
Gandhi contention that external independence will depend on internal swaraj is correct since knowledge of true interest of Indians is crucial in resisting the self-interests of external world. Harmony, freedom from aggression and consistent improvement in prevailing economic conditions will enable people attain political power through acting on their internal strengths and powers. Complete economic independence from external alien control will ultimately lead to political independence since swaraj which is both moral and social will unite all religions including Hinduism, Christianity and Islam in achieving common goal of the nation.
Accordingly, Gandhi contention is correct since all individuals should perform their duties as citizens and exercise their rights such as right of citizenship and right to vote. Self-rule of individuals and citizen’s service to society should aim at improving economic conditions, reducing diseases and eliminating violence while promoting individual rights (Singh 48)

Let us find you another Essay on topic Explain Gandhi's contention that external independence (swaraj) depends upon internal swaraj. Do you think his reasoning is correct why or why not for FREE!