Use of Animals in Entertainment - Case Study Example

Comments (0)
Add to wishlistDelete from wishlist
Cite this document
Summary
This case study describes the use of animals in entertainment. This paper outlines the industry of zoos and aquariums, the role of animals in movie and television sets, and right of freedom for animals.  …
Download full paperFile format: .doc, available for editing
HIDE THIS PAPERGRAB THE BEST PAPER92.1% of users find it useful 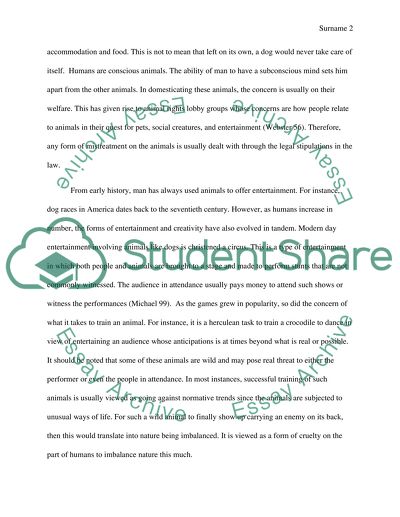 Extract of sample "Use of Animals in Entertainment"

Download file to see previous pages However, there is a touch to this entertainment industry that has drawn the attention of rights activists all over the world and that is the use of animals in entertainment.
Animals have been used by humans to perform various roles since historical times. In fact, in most mythical renditions or oral narrations, man has been mentioned to have domesticated animals from time immemorial. One of the animals is the dog. A dog is an animal that is considered man’s best friend. Over the years, the dog has been used by man for various activities including security as well as to run errands. This has been in exchange for accommodation and food. This is not to mean that left on its own, a dog would never take care of itself. Humans are conscious animals. The ability of man to have a subconscious mind sets him apart from the other animals. In domesticating these animals, the concern is usually on their welfare. This has given rise to animal rights lobby groups whose concerns are how people relate to animals in their quest for pets, social creatures, and entertainment (Webster 56). Therefore, any form of mistreatment on the animals is usually dealt with through the legal stipulations in the law.
From early history, man has always used animals to offer entertainment. For instance, dog races in America date back to the seventieth century. However, as humans increase in number, the forms of entertainment and creativity have also evolved in tandem. Modern-day entertainment involving animals like dogs is christened a circus. This is a type of entertainment in which both people and animals are brought to a stage and made to perform stunts that are not commonly witnessed. The audience in attendance usually pays money to attend such shows or witness the performances (Michael 99). As the games grew in popularity, so did the concern of what it takes to train an animal. For instance, it is a herculean task to train a crocodile to dance in view of entertaining an audience whose anticipations is at times beyond what is real or possible.  ...Download file to see next pagesRead More
Share:
Tags
Cite this document
(Use of Animals in Entertainment Case Study Example | Topics and Well Written Essays - 1500 words, n.d.)
Use of Animals in Entertainment Case Study Example | Topics and Well Written Essays - 1500 words. Retrieved from https://studentshare.org/performing-arts/1591593-undertake-an-investigative-project-in-the-animal-management-sector

CHECK THESE SAMPLES OF Use of Animals in Entertainment

Its emphasis is not solely on academic activities, which would consequently overlook other areas of development that are likewise significant. Moreover, a child-centered program becomes meaningful when it draws from the children’s needs and learning styles, life experiences, interests, and ideas (Brewer, 2001). An integrated curriculum consists of a number of strategies that can be applied to deepen meaningfulness and support conceptual development (Bredekamp and Rosegrant, 1992). An integrated curriculum allows the young child to perceive the world around him more clearly. Furthermore, it provides opportunities for in-depth exploration of a topic and learning that has thorough coverage. It provides more choices on how to pr...
8 Pages(2000 words)Assignment

Technology...
10 Pages(2500 words)Essay
sponsored ads
Save Your Time for More Important Things
Let us write or edit the case study on your topic "Use of Animals in Entertainment" with a personal 20% discount.
GRAB THE BEST PAPER

Let us find you another Case Study on topic Use of Animals in Entertainment for FREE!