Comments (0)
Add to wishlist Delete from wishlist
Cite this document
Summary
In 1962, J L Austin put forth 'an understanding of language as a medium for actions or deeds' (Kenaan 66). The notion of language as behaviour found further expression as 'linguistic acts' and 'speech acts' (Searle). What is more, as a type of behaviour, defensive communication is a social phenomenon that occurs when a person in a group feels threatened (Gibb 14)…
Download full paper File format: .doc, available for editing
HIDE THIS PAPERGRAB THE BEST PAPER93.4% of users find it useful 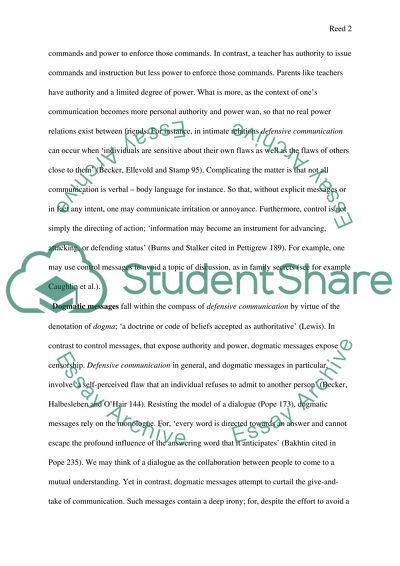 Download file to see previous pages By examining these forms of messages in the context of interpersonal communication, I shall reaffirm previous research findings that defensive communication results in 'losses in efficiency in communication' (Gibb 14).
The strategy of defensive communication has various tactics and in the limited space afforded by this paper I will separately analyse in the following order only control messages, dogmatic messages, messages of indifference, and messages of superiority.
Control messages predominantly operate as imperatives, commands, and instructions. Control messages therefore imply authority, that is, the 'right to give orders or make decisions' (Lewis). Authority, however, implies varying degrees of power. 'A power relation is a causal relation between the preferences of an actor regarding an outcome and the outcome itself' (Pettigrew 188). For example, a police officer has authority to issue commands and power to enforce those commands. In contrast, a teacher has authority to issue commands and instruction but less power to enforce those commands. Parents like teachers have authority and a limited degree of power. What is more, as the context of one's communication becomes more personal authority and power wan, so that no real power relations exist between friends. For instance, in intimate relations defensive communication can occur when 'individuals are sensitive about their own flaws as well as the flaws of others close to them' (Becker, Ellevold and Stamp 95). Complicating the matter is that not all communication is verbal - body language for instance. So that, without explicit messages or in fact any intent, one may communicate irritation or annoyance. Furthermore, control is not simply the directing of action; 'information may become an instrument for advancing, attacking, or defending status' (Burns and Stalker cited in Pettigrew 189). For example, one may use control messages to avoid a topic of discussion, as in family secrets (see for example Caughlin et al.).
Dogmatic messages fall within the compass of defensive communication by virtue of the denotation of dogma; 'a doctrine or code of beliefs accepted as authoritative' (Lewis). In contrast to control messages, that expose authority and power, dogmatic messages expose censorship. Defensive communication in general, and dogmatic messages in particular, involve 'a self-perceived flaw that an individual refuses to admit to another person' (Becker, Halbesleben and O'Hair 144). Resisting the model of a dialogue (Pope 173), dogmatic messages rely on the monologue. For, 'every word is directed towards an answer and cannot escape the profound influence of the answering word that it anticipates' (Bakhtin cited in Pope 235). We may think of a dialogue as the collaboration between people to come to a mutual understanding. Yet in contrast, dogmatic messages attempt to curtail the give-and-take of communication. Such messages contain a deep irony; for, despite the effort to avoid a topic or point via an assertion of strength, the effort itself communicates a defensive attitude grounded on weakness. Dogmatic messages, therefore, undermine any authority or power asserted by a conversational partner. Furthermore, because a dogmatic message ...Download file to see next pages Read More
Share:
Tags
Cite this document
(“Defensive Communication Essay Example | Topics and Well Written Essays - 1000 words”, n.d.)
Retrieved from https://studentshare.org/people/1501162-defensive-communication

CHECK THESE SAMPLES OF Defensive Communication

Communication as such, is a dynamic process of exchanging thoughts, ideas, information, feelings, messages, attitude or knowledge amongst two or more persons through a predefined set of symbols, icons and signs called language. The language in itself is not made of a set of units alone. It is the spaces spanned by a set of units like semantic associations with words, human behavior, group behavior, social attitudes that make language. Radio, television, print, Internet, Advertising, Public Relations form part of the communication process. Effective communication is one in which this exchange achieves the intended goals of the communicating ends. A human being communicates his message with the help of spoken words or sign language....
8 Pages (2000 words) Term Paper

Internal communication in any organization has been found to play a significant role in regard to role achievement in any business venture. When the internal communication department closely works with the top management, it has been found that job satisfaction levels rise which in effect translates to higher individual and group output from the workers (HRM guide, 2009). It is the role of the internal communication department to ensure that the strategic organizational direction is passed on to all employees and followed as planned so as to guarantee the achievement of intended outcomes.
With the current developments towards globalization, knowledge availability has become more readily available and the economy has approache...
9 Pages (2250 words) Assignment

Communication is part of everyday life. It is not limited to adults or learned individuals. Babies communicate with their mothers as they cry when they are hungry, the mute use sign language to express what they want to say, while the mentally disabled laugh when they are happy or excited. The forms of communication people use may vary but common elements are usually present. These include the message and the communicators or the participants who play the role of either the sender or receiver of the message. In the communication situation, I had with my friend, these common features were present along with others namely, feedback, noise, context, and mutual agreement/negotiation. These elements affected the outcome of the conversa...
12 Pages (3000 words) Case Study
sponsored ads
Save Your Time for More Important Things
Let us write or edit the essay on your topic "Defensive Communication" with a personal 20% discount.
GRAB THE BEST PAPER

Let us find you another Essay on topic Defensive Communication for FREE!