Comments (0)
Add to wishlistDelete from wishlist
Cite this document
Summary
The Japanese people are said to be highly cultural, taking advantage of the varied cultures that are found in this country. In terms of cuisine, the country has transcended a long path, developing much-sophisticated cuisine that has received worldwide acceptance. …
Download full paperFile format: .doc, available for editing
HIDE THIS PAPERGRAB THE BEST PAPER93.6% of users find it useful 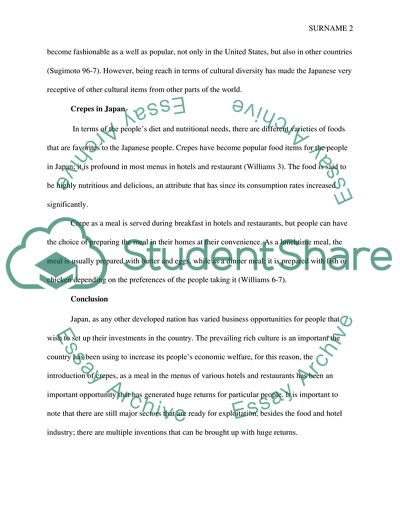 Extract of sample "Crepes in Japan"

Crepes in Japan Introduction Asia, comprises of many countries, most of whom are island nations, being one of them, Japan is an island country that is located in on the East of Asia in the Pacific Ocean. In terms of geographical location, the country borders Japan Sea on the east, China, as well as Russia and Korea. The country has a large population the rest on its 6852 islands, in this case, these people form a good market for people and companies investing in this country.
The people of the country have varied cultures that have been complemented by many other nationals that live in the country’s cities. Japan is a country that has lived to enjoy political stability since the end of the Second World War; this attribute has made it a good destination for multinational companies that have set ground in this country.
Aesthetics
The Japanese people are said to be highly cultural, taking advantage of the varied cultures that are found in this country. For instance, in terms of music, the country is characterized by several styles of performance that comprise of traditional, as well as modern approaches. In fact, this country is ranked second in the world’s music industry; making is a good market for music companies from all over the world (Martinez 235).
In terms of cuisine, the country has transcended a long path, developing much-sophisticated cuisine that has received worldwide acceptance. Japanese food has developed to become fashionable as a well as popular, not only in the United States, but also in other countries (Sugimoto 96-7). However, being reach in terms of cultural diversity has made the Japanese very receptive of other cultural items from other parts of the world.
Crepes in Japan
In terms of the people’s diet and nutritional needs, there are different varieties of foods that are favorites to the Japanese people. Crepes have become popular food items for the people in Japan; it is profound in most menus in hotels and restaurant (Williams 3). The food is said to be highly nutritious and delicious, an attribute that has since its consumption rates increased significantly.
Crepe as a meal is served during breakfast in hotels and restaurants, but people can have the choice of preparing the meal in their homes at their convenience. As a lunchtime meal, the meal is usually prepared with butter and eggs, while as a dinner meal; it is prepared with fish or chicken depending on the preferences of the people taking it (Williams 6-7).
Conclusion
Japan, as any other developed nation has varied business opportunities for people that wish to set up their investments in the country. The prevailing rich culture is an important the country has been using to increase its people’s economic welfare, for this reason, the introduction of crepes, as a meal in the menus of various hotels and restaurants has been an important opportunity that has generated huge returns for particular people. It is important to note that there are still major sectors that are ready for exploitation, besides the food and hotel industry; there are multiple inventions that can be brought up with huge returns.
Works Cited
Martinez, Dolores. Japanese Culture. London: Routledge, 2007. Print.
Sugimoto, Yoshio. The Cambridge Companion to Modern Japanese Culture. Cambridge England: Cambridge UP, 2009. Print.
Williams Jeff. Japanese Crepes! The Full Story (and how to make your own). 14 October 2007. Web. 24 September 2014. < http://www.alphabetcityblog.com/2007/10/japanese-crepes-full-story-and-how-to.html>Read More
Share:
Tags
Cite this document
(“Crepes in Japan Essay Example | Topics and Well Written Essays - 500 words”, n.d.)
Retrieved from https://studentshare.org/other/1658282-crepes-in-japan

CHECK THESE SAMPLES OF Crepes in Japan

...?Japan Tsunami On March 11, one of the biggest tsunamis hit Japan and led to the death of thousands of civilians. An earthquake of 8.9 magnitudewas recorded undersea which led to great worries for all the citizens living in the northeastern Japan. Even the people living in swaying skyscrapers had to worry because of the great intensity of the earthquake. The death toll is yet to be established specifically because of the great losses that the earthquake posed. The loss of the tsunami has been so great that Barack Obama has categorized the loss to be a catastrophe. The United State has ever since helped in aiding many operations to revive the situation in Japan (Foster 2011). In the late 1800s Japan was struck by a similar high intensity...
2 Pages(500 words)Essay

... Task Japan is among the world’s most populated countries in the 21st century. The population of Japan is estimated to be approximately 125,000,000 according the recent population data available. Japan is a country that is made of several islands, which, are spread out in the Pacific Ocean. The main islands that make up Japan are, Kyushu, Hokkaido, Honshu and Shikoku. Japan is located in the Asian continent neighboring Korea, China and Russia. Japan has its southern most islands lying relatively at the same as Bahamas whereas its northern most islands geographically lies in similar latitude as Portland (kwintessential.co.uk). Japan is preeminently an industrious country with a booming economy that has underwent numerous challenges over...
5 Pages(1250 words)Essay

...?Although it is true that culture within Japan has experienced a long and dynamic past, it cannot be said the Japanese culture is wholly or entirely Japanese by nature. What is meant by this is that peculiar influences from outside nations and different cultures have influenced upon and ultimately been adopted by the Japanese over the past several centuries. For purposes of this brief analysis, the author will consider two cultural/religious interpretations/incorporations that Japanese culture has made within the past. The first of these is necessarily with regards to the importation of Buddhism from the Korean Peninsula. Secondly, the analysis will also discuss the way in which Confucianism was imported and ultimately adopted...
3 Pages(750 words)Essay

...Japan is one of the most densely populated nations on the planet. Its extreme population density is a reflection of the land constraints on a growing population. The Japanese government has attempted to deal with the limited land with a series of massive land reclamation projects over the last 100 years. Tokyo Bay a long and deep bay on the southern coast of Japan has been the principal site of these operations. Twenty percent of land has been reclaimed over the last 100 years(5, Mason). Many major development projects have been built on this land including the international airport completed in 2001. Today the process of reclamation of land from the sea is going on but it is faced with resistance from environmentalists that argue...
16 Pages(4000 words)Essay

...Rachna Jalan Academia-Research English 10 March 2007 Heian Japan Introduction Heian is the period of Japanese history between 794 – 1185 d afterthe capital city of Heian-ky (Kyoto) (“Heian period”). The flourishing culture of court aristocracy is truly reflected in the Heian era. It was an epoch when the art, poetry and literature of the Japanese imperial court were at its peak (“Heian period”). In Japanese the meaning of Heian is “peace” or “tranquility” (“Heian period”). The imperial court dedicatedly encouraged aesthetic improvements which can be seen in poetry and calligraphy. That eon has been revealed in a number of contemporaneous literatures such as The Pillow Book of Sei Shonagon by Sei Shonagon, Anthology of Japanese Literature...
4 Pages(1000 words)Essay

...﻿ Mrs. Harrington is currently on business trip to Japan. She is going to need information regarding different aspects of the culture of the country in order to determine if the country is viable alternative for the company. She is also going to need the information to educate herself about the basic cultural aspects needed to interact with Japanese people. Japan consists of four main islands: Honshu, Hokkoido, Kyushu, and Shikuke. The terrain of Japan is made up mostly of mountainous terrain which is the primary reason why most cities are located in the coastal region. The country lacks natural resources and arable lands. The population of Japan is 127.4 million people (CountryWatch, 2009). Tokyo is the capital of Japan. The main...
2 Pages(500 words)Assignment

...UNIQLO Company al affiliation: UNIQLO Company UNIQLO Company is an organization known to deal with fashion and design in Japan. Its main goals and objectives are to provide a continuous flow of basic casual wear, high quality and fashionable clothing at prices that are considerably low in the global market. This has helped the company grow in its international operations and also improve its competitive advantage among other companies in the clothing and wear industry in other nations. The company came to existence first in Japan in the year 1963, in March. Its first store was in the year 1994, and it experienced high growth based on development of a network of stores in suburban roadsides of UNIQLO. UNIQLO Company first established its...
2 Pages(500 words)Assignment

American versus Japanese Profile The education system varies in different countries due to several factors. By doing standardization tests do we gauge almost accurately the competitiveness of scholars globally. Standardization tests help get the best of scholars globally to perform well when placed in different learning environments other than their own country.
Comparing my test scores in UAE from the results of my fellow students of the same grade, I would say they are uniform. In UAE, the government has strived to provide the same curricula for its studying population. This makes my educational achievements equally competitive to another student’s academic qualifications but from a different school or a different part of the...
1 Pages(250 words)Assignment

...﻿Discovering Japan A Life in Japan is a very interesting documentary which represents Japan from the point of view of Westerners who live there. This video makes a great sense because it touches upon the topics which often stay behind media coverage. For instance, it is interesting to notice that Japan is less technological than it seems to be represented for foreigners. The movie represents some good examples of adaptation of people from individualist cultures to new collectivist environment. This shows a relevant example of a collectivist culture to keep in mind. It shows that generally people are happy with their lives in Japan despite the major concerns about lack of opinions and critical media. The movie is very informative about...
1 Pages(250 words)Movie Review

... Social and cultural dilemmas that mark early 20th century Japan Introduction In the late ninetieth century, Meiji was restored as the Japan head of a country that was previously with a weak military. Before United, States had forced the Japan nation to sign treaties that limited the control of overseas businesses and made them have the crimes that are committed against the foreigners been tried in Western courts. In early twentieth century, Meiji died and left Japan with highly educated people and well-developed communication and transport networks. In an attempt to bring together the country and respond to the challenges posed by the Western, the leaders of Meiji formed an ideology that was centered on the emperor. The emperor had...
6 Pages(1500 words)Essay
sponsored ads
Save Your Time for More Important Things
Let us write or edit the essay on your topic "Crepes in Japan" with a personal 20% discount.
GRAB THE BEST PAPER

Let us find you another Essay on topic Crepes in Japan for FREE!