Compare and contrast the views of Meyer and Bok on the issues of medical professional lying to patients. State and explain the similarities and differences in their views - Essay Example

Comments (0)
Add to wishlistDelete from wishlist
Cite this document
Summary
Bernard Meyer writes a paper entitled, Lying and Withholding the truth which discusses the ethical aspects of physicians intentionally giving the patient false information, and whether or not it is morally acceptable to withhold specific facts from the patient on his her…
Download full paperFile format: .doc, available for editing
HIDE THIS PAPERGRAB THE BEST PAPER96.6% of users find it useful 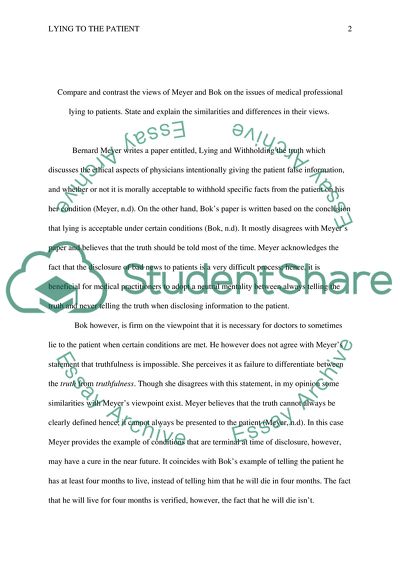 Extract of sample "Compare and contrast the views of Meyer and Bok on the issues of medical professional lying to patients. State and explain the similarities and differences in their views"

Bernard Meyer writes a paper entitled, Lying and Withholding the truth which discusses the ethical aspects of physicians intentionally giving the patient false information, and whether or not it is morally acceptable to withhold specific facts from the patient on his her condition (Meyer, n.d). On the other hand, Bok’s paper is written based on the conclusion that lying is acceptable under certain conditions (Bok, n.d). It mostly disagrees with Meyer’s paper and believes that the truth should be told most of the time. Meyer acknowledges the fact that the disclosure of bad news to patients is a very difficult process; hence, it is beneficial for medical practitioners to adopt a neutral mentality between always telling the truth and never telling the truth when disclosing information to the patient.
Bok however, is firm on the viewpoint that it is necessary for doctors to sometimes lie to the patient when certain conditions are met. He however does not agree with Meyer’s statement that truthfulness is impossible. She perceives it as failure to differentiate between the truth from truthfulness. Though she disagrees with this statement, in my opinion some similarities with Meyer’s viewpoint exist. Meyer believes that the truth cannot always be clearly defined hence; it cannot always be presented to the patient (Meyer, n.d). In this case Meyer provides the example of conditions that are terminal at time of disclosure, however, may have a cure in the near future. It coincides with Bok’s example of telling the patient he has at least four months to live, instead of telling him that he will die in four months. The fact that he will live for four months is verified, however, the fact that he will die isn’t.
Meyer believes that patients may ask for the truth meanwhile they do not actually want the truth and simply want to gain confidence from the good news. However, Bok believes it is an empirical fact that patients want to hear the truth about their condition and doctors have no right or justification to withhold information on the assumption that patients actually prefer it (Bok, n.d).
Bok agrees with Meyers’s view that the truth may sometimes harm the patient. Meyer refers to this as ‘therapeutic privileged’. However, Bok believes that this claim by Meyer is exaggerated and benefits from telling the truth exist and are not given sufficient attention. Bok believes that telling the patient the truth allows him or her to decide what steps to take forward in his or her treatment process. She allows withholding of information from the patient if the decision is made by more than one doctor, if a close relationship exists between the doctor and patient and if the burden of justification is placed on the doctors (Bok, n.d).
References
Bok, S. (n.d) Lies to the Sick and Dying. Retrieved from
http://www.philosophy.ucsb.edu/websites/phil7/Bok_lies.pdf
Meyer, B. (n.d) Truth and the Physician. Lying and Withholding the truth. Retrieved from
http://www.philosophy.ucsb.edu/websites/phil7/Meyer_physician_lying.pdf Read More
Share:
Tags
Cite this document
(“Compare and contrast the views of Meyer and Bok on the issues of Essay”, n.d.)
Compare and contrast the views of Meyer and Bok on the issues of Essay. Retrieved from https://studentshare.org/miscellaneous/1617729-compare-and-contrast-the-views-of-meyer-and-bok-on-the-issues-of-medical-professional-lying-to-patients-state-and-explain-the-similarities-and-differences-in-their-views

“Compare and Contrast the Views of Meyer and Bok on the Issues of Essay”, n.d. https://studentshare.org/miscellaneous/1617729-compare-and-contrast-the-views-of-meyer-and-bok-on-the-issues-of-medical-professional-lying-to-patients-state-and-explain-the-similarities-and-differences-in-their-views.
Comments (0)
Click to create a comment or rate a document

CHECK THESE SAMPLES OF Compare and contrast the views of Meyer and Bok on the issues of medical professional lying to patients. State and explain the similarities and differences in their views

...: . From the 4th column of table 2 we see that only the coefficients of X2, X4, X6 and X7 exceed the critical value (in absolute terms). Thus, these are the only variables that are found to be significant, i.e., the coefficients are statistically different from zero. It can be checked from the column of probabilities it is only these coefficients that have p-values less than 0.05. Therefore, the conclusion is that only the monthly number of check ins, common use area, operational berthing capacity and number of rooms have statistically significant effects on the predicted variable, the required manhours to run the establishment. Problem 2 The test of joint significance is an F test of the null hypothesis that all...
11 Pages(2750 words)Essay

...of being romantic and of a lower class as compared to the English woman. Analysis The one way assimilation is viewed from the fact parents of the Hispanic girls are strict on their dressing code to maintain their Hispanic origin and resist the new English culture. The stereotyping of the Hispanic women as being good housekeepers, waitresses and other lower jobs is also one way assimilation as most of the Hispanics women do not try to climb up the ladder and view themselves fit for these roles; perhaps by being suppressed by the dominant natives. As Cofer explains, this has led most Hispanic women and especially in the United states to fail in upward...
3 Pages(750 words)Essay

Compare and Contrast Liberal and Realist Views of International Law

.... This paper intends to compare and contrast realist and liberalist views of international law. Political realists argue in favor of their nation in terms of its security, social reconstructions, and moral concern while political liberalists argue in favor of international cooperation (Claude & Weston, 2006:122). Security concern is a factor that affects national interests and international interests. It is apparent that political stability of a nation depends on the security measures in place. An instant of insecurity drag political gains and economic endeavors of a country. However, debate on security drags both realists and liberalists into explaining their...
8 Pages(2000 words)Essay

...?Skinner and Moore’s different views Concerning their views on determinism, below are elemental points that compare and contrast Skinner and Moore’s different perspectives. Skinner’s hard determinism According to Skinner, human behavior cannot be determined if we just only rely on internal psychological state, but things around us must be understood in a Scientific way, then we should learn to understand how things are and what exists. Skinner’s belief is definitely empirical in nature and that it specifies we can only know about what we can observe. So Skinner suggests that it is better for us to understand trends in...
5 Pages(1250 words)Essay

...facilitates the activity, rather than the matrix metalloproteinase expression. Background. The debate on the cause and treatment of breast cancer has never ceased. There is lacking scientific proof that breast care can be cured. The number of studies that have sought to ascertain the real cause of this deadly disease has always increased (Ara, & Deyama, 2000; Cristofanilli, 2006). However, most were focused on the initial stages of breast cancer. According to Nawrocki-Raby and Gilles (2003) metastatic cell can help increase the survival chances of a breast cancer patient. Symowicz and Adley (2007) noted that Kruppel-like factor 8 an important cancer promoting protein occurs in different categories of...
4 Pages(1000 words)Essay

...Aristotle's Views Aristotle was a Greek philosopher, physicist, poet and a popular of Plato and teacher of Alexander the Great (Wikimedia Foundation, Inc). He was able to produce books such as Nichomachean Ethics which describes the "happy life intended for one by nature as one lived in accordance with virtue" and Politics which gives analysis on political community (Clayton). As a philosopher and a political scientist, Aristotle was able to observe communities so that he was able to describe the relationship of men, especially to his community. One of his famous lines says that, "the man who is incapable of working in common, or who in his self-sufficiency has no need of others, is no part of the community, like a beast or a god... "....
3 Pages(750 words)Essay

...Introduction Cultural affiliations and religious expressions change dependent on the region of the world that one is in. Often, these associations change according to the location where one is at in the world as well as what the education is from that area. More importantly, the historical and cultural information that is given to a specific region will change how one thinks about a culture and religion. A specific difference that is seen is between the West and the East regions of the world. More specifically, there is a difference in how the Western world views Islam and how Islam views the Western world. Biases and boundaries as well as educational differences create a specific understanding toward how one looks at both... that the...
10 Pages(2500 words)Essay

Compare and contrast the views of diverse sociologists

Compare and contrast Meyer and Stowers

...COMPARE AND CONTRAST MEYER AND STOWERS Stanley Stowers writes his essay considering different perspectives. These perspectives includedifferent ways in which Romans was read in different places, using rhetorical conventions and generic texts, discovering cultural codes, and showing audience and author’s textual strategies. This approach is to help avoid a common decisive factor among readers. Contrary to this writing, Paul Meyer gives his point of view and understanding of Paul’s work as written in the book of Romans. His book is mostly based on answering questions that have been difficult to understand1. For example, his first chapters are an answer to a question concerning spirit and law. He has an answer to his readers about... -20, Paul...
2 Pages(500 words)Essay

Express your own views about issues

...for the benefit of the industry. Rules and regulations should be imposed such that in case of any problem that might arise within the industry, employees are knowledgeable on how to go about in solving that issue. A good example is setting policies that will govern certain behaviors in an organization. These policies if not followed should provide disciplinary actions to be taken. Topic 3 For the success of an organization, production of high quality product or services is of significant importance. Organizations should make sure that all the employees are fully dedicated to the provision of certain product or services. Organizations work as a team and all employees should be dedicated to producing quality products or...
6 Pages(1500 words)Essay
sponsored ads
Save Your Time for More Important Things
Let us write or edit the essay on your topic "Compare and contrast the views of Meyer and Bok on the issues of medical professional lying to patients. State and explain the similarities and differences in their views" with a personal 20% discount.
GRAB THE BEST PAPER

Let us find you another Essay on topic Compare and contrast the views of Meyer and Bok on the issues of medical professional lying to patients. State and explain the similarities and differences in their views for FREE!