Comments (0)
Add to wishlistDelete from wishlist
Cite this document
Summary
These resources may include geothermal heat, sunlight, waves, wind, tides and rain among others (Vecchia, Formisano, Rosselli, and Ruggi 479).
Renewable energy is beneficial to…
Download full paperFile format: .doc, available for editing
HIDE THIS PAPERGRAB THE BEST PAPER94.6% of users find it useful 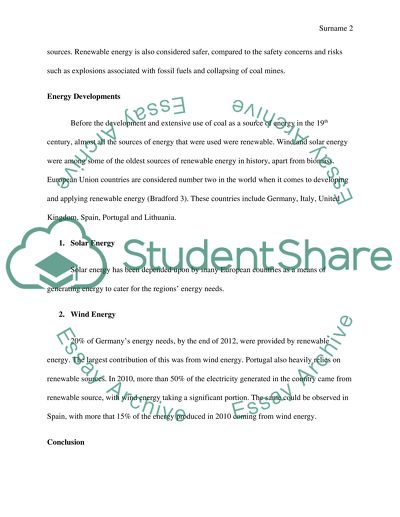 Outline for Renewable Energy Introduction Renewable energy may be described as energy that is obtained from resources which can be replenished. These resources may include geothermal heat, sunlight, waves, wind, tides and rain among others (Vecchia, Formisano, Rosselli, and Ruggi 479).
Benefits of Renewable Energy in the Community
Renewable energy is beneficial to communities in myriad ways. One benefit of renewable energy to a community is the fact that renewable energy sources offer clean alternatives of energy production, thus having very few negative impacts on the environment. Another benefit of renewable energy is that it can be replenished, thus, ensuring that it is always available to future generations. This also ensures energy security. Renewable energy is, therefore, sustainable. Renewable energy also creates employment opportunities due to the fact that the labor and materials needed to establish and sustain renewable energy facilities need workmanship. This also boosts the economies of regions making use of renewable energy sources. Renewable energy is also considered safer, compared to the safety concerns and risks such as explosions associated with fossil fuels and collapsing of coal mines.
Energy Developments
Before the development and extensive use of coal as a source of energy in the 19th century, almost all the sources of energy that were used were renewable. Wind and solar energy were among some of the oldest sources of renewable energy in history, apart from biomass. European Union countries are considered number two in the world when it comes to developing and applying renewable energy (Bradford 3). These countries include Germany, Italy, United Kingdom, Spain, Portugal and Lithuania.
1. Solar Energy
Solar energy has been depended upon by many European countries as a means of generating energy to cater for the regions’ energy needs.
2. Wind Energy
20% of Germany’s energy needs, by the end of 2012, were provided by renewable energy. The largest contribution of this was from wind energy. Portugal also heavily relies on renewable sources. In 2010, more than 50% of the electricity generated in the country came from renewable source, with wind energy taking a significant portion. The same could be observed in Spain, with more that 15% of the energy produced in 2010 coming from wind energy.
Conclusion
The entire EU hopes to acquire more than 20% of its energy from renewable sources, at least by 2020. This will enable the region to reduce greenhouse emission and lessen its dependence on imported energy. It will also create more employment opportunities, as well as foster technological creativity and innovation.
Works Cited
Bradford, Travis. Solar Revolution: The Economic Transformation of the Global Energy Industry. Michigan: MIT Press, 2006. Print.
Vecchia, A., Formisano, W., Rosselli, V., Ruggi, D. "Possibilities for the Application of Solar Energy in the European Community Agriculture". Solar Energy 26.6 (1981): 479–489. Print.
Leon, M., & Kumar, S. “Mathematical modeling and thermal performance analysis of unglazed transpired solar collectors”. Solar Energy 81.1 (2007): 62–75. Read More
Share:
Tags
Cite this document
(“Outline for renewable energy Essay Example | Topics and Well Written Essays - 500 words”, n.d.)
Outline for renewable energy Essay Example | Topics and Well Written Essays - 500 words. Retrieved from https://studentshare.org/miscellaneous/1616511-outline-for-renewable-energy

CHECK THESE SAMPLES OF Outline for renewable energy

...? Renewable Energy Renewable energy is the energy that is generated from such natural resources as wind, rain, sunlight, geothermal heat and tides that can be replenished naturally. Approximately 16% of all energy that was consumed in the world was generated from these renewable sources. 3% came from new renewables like small hydro, wind and bio fuels. While most of these renewable sources were projects in large scale, they were also suitable for remote and rural areas, where human development was tied to energy availability. Concerns over the effects of climate change,...
4 Pages(1000 words)Essay

...Renewable energy Renewable energy is energy coming from natural sources. Scientists all over the world are carrying out research to come up with cost effective and environmental friendly sources of energy. Several households and industries in the United States have now adopted these alternative sources, but the older fossil fuels still retain popularity (Boyle 17). This is because the renewable sources, despite their regeneration capacity, also have disadvantages. Wind energy, which is a renewable source of energy, has been in use for many centuries. In the Holland...
6 Pages(1500 words)Essay

...? Renewable Energy al affiliation: Introduction Renewable energy refers to the energy coming from natural sources. These sources include: rain, sunlight, wind, tides and geothermal heat. Renewable energy applications are mostly done in large scale. However it is also used in the rural areas. Renewable energy gives an encouraging range of technologies which can be used today and even in the future. According to Sorensen (2010), the most important advantage of renewable energies is reduced rate of carbon emission to the atmosphere. Since the beginning of...
4 Pages(1000 words)Research Paper

...? Renewable Energy Development and Progression in China, India, Nigeria Introduction It is worth noting that stability of any country’s economy cannot be realized unless measures towards realizing energy balance are achieved. In this context, energy is the indirectly observed quantity that often comes in many forms including potential, radiant, kinetic and other forms of energy. Arguably, energy is an indispensable prerequisite for causing change or performing work. Renewable and none-renewable forms of energy are the two known forms of energy that have been in use for...
5 Pages(1250 words)Research Paper

...RENEWABLE ENERGY PART ASSUMPTIONS A self-built solar water heater, was made by one of our recent and tested outdoors, with beam radiation nearly normal to the plane of the collector. The test results obtained are contained in the Excel spreadsheet (ENE800J1 Wk 1 c/w.xls). The following details will be necessary to complete this coursework. -A constant mass flow rate of 0.00755 kg/sec was used throughout the test. -The collector aperture area was 0.47m2. - An average value of Cp between the maximum and minimum fluid Temperatures may be used throughout, (4.1784 kJ/kg K) - linear regression analysis should be used to find the best-fit line... . It's not...
12 Pages(3000 words)Essay

Renewable Energy at Point of Consumption

..., electricity, energy consumption, renewable sources of energy. 2. Introduction It is known worldwide that energy is the most used ingredient item featured almost in every area. Since the era of globalization has begun, the consumption of energy in both developed and developing countries have been on rise. Non renewable sources of energy are the main source which people are using. It is widely regarded that energy conservation will be one of the most debated issues in the coming decades. Before giving an outline of the dissertation, let’s first understand the idea of topic on which...
31 Pages(7750 words)Dissertation

...Modern Marvels- Renewable Energy With rising concerns of greenhouse gas emissions and continually increasing costs of fuels like coal, petrol etc, renewable energy sources have taken a significant place in the market. Solar Energy: Solar energy is quite an expensive proposition to fulfill the energy needs of a country. Photovoltaic panels are quite expensive because of the need of ultra pure silica making solar powered grids two to five times expensive than typical grids. However, research has been going to replace silica with a mixture of other cheaper elements thereby providing us with a low cost alternative to silica...
3 Pages(750 words)Essay

...Renewable Energy Through time, nuclear energy had received tremendous notoriety due to the dangers associated with its use. In nuclear power plants, the risk assessment entails identification of technical and social risks associated in harnessing this energy source. A social based risk is one of the concerns or uncertainty in consumer’s mind regarding nuclear power, in general, and how it is approved by others. There are contrasting perceptions of nuclear power as a source of energy due to the dangers it poses in the management of nuclear wastes. According to an article published in How to Power the World, “the waste products of nuclear power contain...
2 Pages(500 words)Essay

Let us find you another Essay on topic Outline for renewable energy for FREE!