Comments (0)
Add to wishlistDelete from wishlist
Cite this document
Summary
This can be seen most clearly in buildings like Old Main, built in 1889 under the guidance of Architect C. L. Thompson.
The campus architecture reflects the 100 or…
Download full paperFile format: .doc, available for editing
HIDE THIS PAPERGRAB THE BEST PAPER95.2% of users find it useful 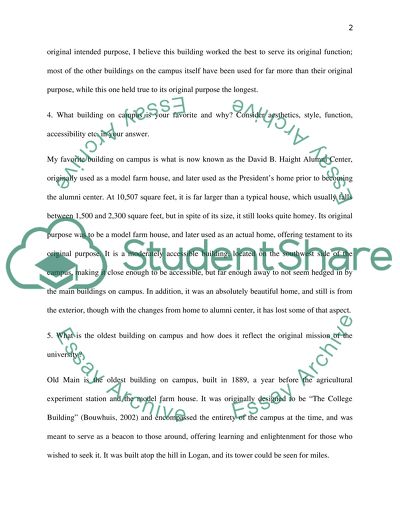 24 February Worksheet Architecture on Campus Which of those architectural styles that we discussed in class are represented on campus?
The primary style of architecture represented on the campus of Utah State University is Gothic, or campus Gothic. This can be seen most clearly in buildings like Old Main, built in 1889 under the guidance of Architect C. L. Thompson.
2. How does the campus architecture reflect the 100 or so years that the university has been in existence?
The campus architecture reflects the 100 or so years that the university has been in existence by the fact that the buildings themselves were designed and built in the predominant style during the time in which their existence was determined to be a necessity.
3. Which building do you think works most well to serve the function it is designed for?
The building that now houses the public relations department for Utah State University was originally designed and used as the campus agricultural experimental station. It was used for its original intended purpose from the time that it was built, in 1890 all the way through 1956; it has since been used by the Information News Services departments and now by the Public relations department of the University. Due to the amount of time that the building itself was used for its original intended purpose, I believe this building worked the best to serve its original function; most of the other buildings on the campus itself have been used for far more than their original purpose, while this one held true to its original purpose the longest.
4. What building on campus is your favorite and why? Consider aesthetics, style, function, accessibility etc. in your answer.
My favorite building on campus is what is now known as the David B. Haight Alumni Center, originally used as a model farm house, and later used as the President’s home prior to becoming the alumni center. At 10,507 square feet, it is far larger than a typical house, which usually falls between 1,500 and 2,300 square feet, but in spite of its size, it still looks quite homey. Its original purpose was to be a model farm house, and later used as an actual home, offering testament to its original purpose. It is a moderately accessible building, located on the southwest side of the campus, making it close enough to be accessible, but far enough away to not seem hedged in by the main buildings on campus. In addition, it was an absolutely beautiful home, and still is from the exterior, though with the changes from home to alumni center, it has lost some of that aspect.
5. What is the oldest building on campus and how does it reflect the original mission of the university?
Old Main is the oldest building on campus, built in 1889, a year before the agricultural experiment station and the model farm house. It was originally designed to be “The College Building” (Bouwhuis, 2002) and encompassed the entirety of the campus at the time, and was meant to serve as a beacon to those around, offering learning and enlightenment for those who wished to seek it. It was built atop the hill in Logan, and its tower could be seen for miles.
Work Cited/Work Referenced
Bouwhuis, Rob. "USU Historical Buildings." Utah State University. Utah State University, 2002. Web. 24 Feb. 2013. Read More
Share:
Tags
Cite this document
(“WORKSHEET 1: Architecture on Campus Essay Example | Topics and Well Written Essays - 500 words”, n.d.)
WORKSHEET 1: Architecture on Campus Essay Example | Topics and Well Written Essays - 500 words. Retrieved from https://studentshare.org/miscellaneous/1615966-worksheet-1-architecture-on-campus

CHECK THESE SAMPLES OF WORKSHEET 1: Architecture on Campus

...come from conversion of his current assets into cash—or cash generated from its operations. By looking at the cash conversion cycle, another option for the owner is to look at his credit policy, which will enable him to know how fast his cash will come back in order to meet his current obligations so he will not borrow. However, the only drawback on his decision in shortening the cash conversion cycle may lower down the sales, may increase the accounts payable period, and his inventory must work harder for him, which means his inventory turnover should increase in order to convert inventories to cash. Case 1: I. From the information contained in the report determine PepsiCo’s A. length of inventory conversion...
5 Pages(1250 words)Essay

Living on campus and living off campus

...department, and state and OSHA agencies. Upon her analysis of the operation Cindy discovered a disturbing trend. The CFS appears to have a serious safety issue because the number of accidents is 20% higher than similar size operations in the food industry. Her boss, Jake, told her to minimize the severity of the accident report because CFS could not afford the report to show inflated accident statistics. Jake also hinted to Cindy that her grade and favorable job recommendation rest on how she handled the accident report. She found 46 cases of accidents and also noticed that some accidents had gone unreported. Cindy has to choose among these seven alternatives: 1. Prepare the report as Jake asked, with omissions. 2....
2 Pages(500 words)Essay

Architecture of Building on Campus

...1. Which of those architectural styles that we discussed in are represented on campus? Gothic Revival, Art Deco, and Modern Buildings are allpart of the expansive campus. Old Main has classic Gothic Revival aspects. The tower and cathedral type windows make Old Main Gothic Revival or Victorian Revival. Art Deco elements in the Family Life Building are the color and machine crafted windows. The Modern architectural designs of the Manon Caine Russell Kathryn Caine Wanlass Performance Hall and New Agriculture Building have also been an example of modern designs. All of these terms have been discussed in class and are examples of the USU...
2 Pages(500 words)Assignment

...Final Project Proposal Worksheet Question The idea List three questions about art, gender, and culture that you want to find out about by doing your final project. 1. How does gender identity influence how people live in a family setup, the wider community, and the workplace? 2. How do gender expectations relate to advertising and the media? 3. Is the media afraid of challenging the traditional thinking following how it represents males and females? How might these questions help create your final project? My project is mainly focused on the idea of advertising and looking into operations of the media. Identify and describe the option choice you are considering (i.e., creation of an object, performance,...
1 Pages(250 words)Essay

...Worksheet 2: Sculpture Q1 The sculptures enable viewers realize that the campus is conscious of environmental as well as societal dynamics. They make an individual be entertained when walking around the campus. The sculpture eliminates the boredom of the university being a learning institution, but also beautiful scenery to be watched. They also inform individuals about the history of the institution (USU Wellness Center 1). Q2 Four Without The most interesting sculpture is Four Without. It has three dimensions made of steel and cedar wood. The sculpture portrays the representation of the unending effects of lack of agreement between imaginations of the mind and history....
1 Pages(250 words)Assignment

...Campus Friend Report Campus Friend Report My campus is a joyous and light-hearted lady who was born in Spokane, WA. She was brought up and educated in Washington DC and enjoyed a close relationship with her family. She has enrolled in a public relations degree program in a communication college. She narrated to me how she developed interest in the program because she intends to lead a socially diverse life with people of assorted backgrounds. In her childhood, her preferred career was electrical and electronics engineering. However, she did not do very well in mathematics and sciences. She also discovered her good mastery of the English language in elementary school and high school that...
8 Pages(2000 words)Essay
sponsored ads
Save Your Time for More Important Things
Let us write or edit the essay on your topic "WORKSHEET 1: Architecture on Campus" with a personal 20% discount.
GRAB THE BEST PAPER

Let us find you another Essay on topic WORKSHEET 1: Architecture on Campus for FREE!