Comments (0)
Add to wishlistDelete from wishlist
Cite this document
Summary
The 15th Amendment grants all American citizens the right to vote without any discrimination and voices against any illegal condition that suppresses the right to vote to any other person on any basis…
Download full paperFile format: .doc, available for editing
HIDE THIS PAPERGRAB THE BEST PAPER96.1% of users find it useful 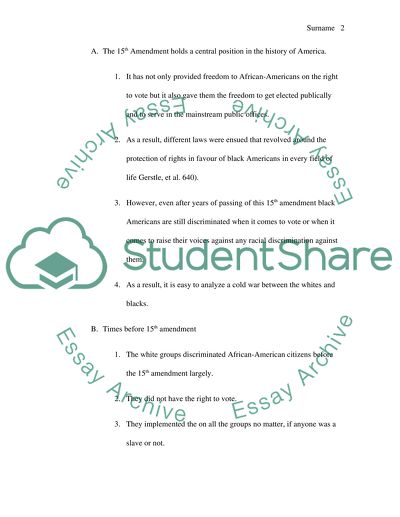 Task: Specific Purpose: I am going to tell my mates about the 15th amendment. Thesis: Giving voting right to African-Americans
I. Introduction
A. The 15th amendment revolves around the protection of civilians’ right to vote in elections to select their leader in America.
B. The 15th Amendment grants all American citizens the right to vote without any discrimination and voices against any illegal condition that suppresses the right to vote to any other person on any basis.
C. It completely highlights the fact that no one can discriminate or deny the right to vote to any other person based on race, colour, religion, and ethnicity.
D. It further highlights that there is no denial of the right to vote even on the person’s former past of either being a slave or a suppressed group.
E. It extends liberation and freedom to every citizen of the United States of America (Marchi 51).
II. Body
A. The 15th Amendment holds a central position in the history of America.
1. It has not only provided freedom to African-Americans on the right to vote but it also gave them the freedom to get elected publically and to serve in the mainstream public offices.
2. As a result, different laws were ensued that revolved around the protection of rights in favour of black Americans in every field of life Gerstle, et al. 640).
3. However, even after years of passing of this 15th amendment black Americans are still discriminated when it comes to vote or when it comes to raise their voices against any racial discrimination against them.
4. As a result, it is easy to analyze a cold war between the whites and blacks.
B. Times before 15th amendment
1. The white groups discriminated African-American citizens before the 15th amendment largely.
2. They did not have the right to vote.
3. They implemented the on all the groups no matter, if anyone was a slave or not.
4. Analyzing the gravity of the situation, Supreme Court extended the right to vote to this neglected group also after the case of Dred Scott vs. Sanford. It was hard for American to accept the Black American citizens as the part of United States (Beard 103).
C. Current Situation
1. Even today, Black Americans face massive discrimination in all walks of life in America; the whites deny them their on the basis of race and ethnic differences.
2. Despite the 15th amendment clearly granting all citizens the right to vote especially those considered as minority groups, the law failed to safeguard the rights of these groups even in 21st century.
3. The victory of Barrack Obama as the first Black President of USA marked another milestone in the history of America.
4. Unfortunately, many white groups viewed his victory as discriminatory.
5. Many people commented critically on this victory, which clearly highlights the biasness against the black people even today.
6. Statistics show that many judges from the Supreme Court disapprove the voting rights given to the Southern States as compared to the Northern States due to the presence of huge black population in South (Wang 280).
III. Conclusion
A. It is important to revise the Voting Rights Acts and it should grant all the voting rights to the minorities by considering them as the Citizens of the United States.
B. All American groups should respect and obey the law passed through amendments and judgement from the Supreme Court (Marchi 51).
C. Supreme Court should play a neutral role in safeguarding the rights of African-American groups.
D. The government should play a reconciliatory role in order to unite the blacks and the whites to live amicably in the United States.
E. This would help both the white and black groups to overcome their differences and it would help in bridging the gap built on hatred and prejudice (Beard 103).
Works Cited
Beard, Ben, Randall Horace and Williams. The Day in Civil Rights History. Alabama: New South Books, 2009. Print.
Gerstle, Gary, McPherson James, Johnson Paul and Murrin John. Liberty, Equality, Power: A History of the American People in 1877. Stamford, Connecticut: Cengage Learning, 2007. Print.
Marchi, Daniel. This Book Places Indictment on the Federal Government and the 16th Amendment. Bloomington, Indiana: Author House, 2012. Print.
Timothy, Hughes. “Very First African American to Vote under the 15th Amendment,” The New York Times, 5 April 1870: 552854. Print.
Wang, Xi. Trial of Democracy: Black Suffrage and Northern Republicans, 1860-1910. Athens, Georgia: University Of Georgia Press, 1997. Print. Read More
Share:
Tags
Cite this document
(“Speech on the 15th amendment giving black men the right to vote Essay”, n.d.)
Speech on the 15th amendment giving black men the right to vote Essay. Retrieved from https://studentshare.org/miscellaneous/1615233-speech-on-the-15th-amendment-giving-black-men-the-right-to-vote

“Speech on the 15th Amendment Giving Black Men the Right to Vote Essay”, n.d. https://studentshare.org/miscellaneous/1615233-speech-on-the-15th-amendment-giving-black-men-the-right-to-vote.
Comments (0)
Click to create a comment or rate a document

...inequality and proposing suffrage. However, the nation was far from ready to seriously pay attention to the issue of women’s rights and thought that the call for justice was not only ridiculous but also a worthless endeavor (Becker 39). After the Civil War, while the constitutional reformation centered on giving freedom to the slaves, Susan B. Anthony and Sojourner Truth, as well as the already-veteran Stanton, fought for the legal ground of providing the same civil and political rights that men enjoy to the American woman. Citing the 14th and 15th Amendments of the Constitution that the right to vote...
10 Pages(2500 words)Research Paper

Ex-fellons and the Right to Vote

...of these minorities in the national politics. As per a New York Times report, the norm of prohibiting ex-felons from voting deprives 13 percent black men of their voting rights, a 7 percent high over the national average (Online). Hence, any protest against the voting rights of ex-felons could be possibly ascribed to racial biases and prejudices. A saner option will be to allow the ex-felons to vote so as to balance the injustice done by the criminal justice system to a significant proportion of social and demographic minorities. Even if one ascribes to the extreme conservative notions and agrees to the...
5 Pages(1250 words)Essay

Hate Speech and the First Amendment

... of race, color, religion, sexual orientation or disability amongst other factors or parameters. The United States First Amendment gives people the right to speak even if the listener of the conversation does not agree with you or feels that the speech is hateful or offensive. The protection also covers even the most offensive and controversial speech from any suppression by the government and permits only minimum regulation of the same through limited circumstances. The basis of this is the understanding by the government that free exchange of ideas encourages the proper understanding of the masses and prevents falsehoods, and embodies the fact that the freedom of expression by an individual without the fear of being punished... of cross by...
10 Pages(2500 words)Research Paper

The struggle for equality

...with other civil rights guarantees as well. As a result, blacks were enslaved and persecuted throughout the late 1700's and early 1800's. After the end of Civil War the Constitution was amended to give former slaves freedom and the rights of citizens. This passing of the 13th, 14th, and 15th Amendments to Constitution were supposed to give the African-Americans equal protection under the law. They were also intended to give the new citizens the right to vote. During the 1850's abolitionists in the North questioned the...
15 Pages(3750 words)Essay

Black Scholars and The Thirteenth Amendment

...when the 13th amendment was put in place because not only did his dream come true and was alive to see it, blacks during his day had a better chance of achieving whatever goals they wished, no matter what part of the country they resided in. Now, we have the scholars of the twentieth century, which is a period of time in which we all can relate. William Edward Burghardt Du Bois and Martin Luther King, Jr. were two important black scholars of the twentieth century who not only made a great number of achievements; they changed life for the black race in numerous ways. Everything that these scholars did, including their published writings, their speeches,...
8 Pages(2000 words)Essay

Ex-fellons and the right to vote

...of these minorities in the national politics. As per a New York Times report, the norm of prohibiting ex-felons from voting deprives 13 percent black men of their voting rights, a 7 percent high over the national average (Online). Hence, any protest against the voting rights of ex-felons could be possibly ascribed to racial biases and prejudices. A saner option will be to allow the ex-felons to vote so as to balance the injustice done by the criminal justice system to a significant proportion of social and demographic minorities. Even if one ascribes to the extreme conservative notions and agrees to...
5 Pages(1250 words)Essay

The Right to Vote

...The right to vote of the The right to vote America is one of the few countries that practice mature democracy. People vote in order to choose their leaders and representatives. Several decades ago, only white men who owned properties were allowed to vote but currently, all US citizens are eligible to vote (De Luca,2007). Voting is beneficial because it enables people to choose good leaders who will take care of their interests and needs. In addition, it guarantees better representation of people in the government and other state agencies. Good representation ensures that the...
1 Pages(250 words)Admission/Application Essay

...the slaves within the states that had remained adamant propagating slavery in rebellion against the American federal government (Morrow, 2011, pg 8-9). Sadly, this newly found freedom applied only to those slaves found within the states in the confederacy. The final blow to slavery came in 1865 following the 13th Amendment ratification that came alongside other two important amendments. This included: The 13th Amendment that forbade all form of slavery and forced servitude, the 14th Amendment which warranty all citizens an equal protection of the laws and due process and lastly the 15th Amendment which exclusively gives...
11 Pages(2750 words)Essay

...of the factors that have been brought forward as reasons for the persistence of autocratic societies in the Middle East are religion, rents received from oil, control of the military, and using violence as a tool for oppression.  Along with the previously stated issues, “one factor that does help explain the democratic deficit is the subordination of women” (Fish 2002, P. 5).  The Middle East is an area of the world that is well known for its lack of freedoms and oppression of women, preventing much of the population the right to voice any opinion on matters that directly affect them. One of the few countries in the Middle East that has allowed women the right to not only vote but also...
1 Pages(250 words)Essay
sponsored ads
Save Your Time for More Important Things
Let us write or edit the essay on your topic "Speech on the 15th amendment giving black men the right to vote" with a personal 20% discount.
GRAB THE BEST PAPER

Let us find you another Essay on topic Speech on the 15th amendment giving black men the right to vote for FREE!