Comments (0)
Add to wishlistDelete from wishlist
Cite this document
Summary
The hiring process is approached from two different perspectives; from the employers and employees sides. For the employer, the concern is experience and personal…
Download full paperFile format: .doc, available for editing
HIDE THIS PAPERGRAB THE BEST PAPER92% of users find it useful 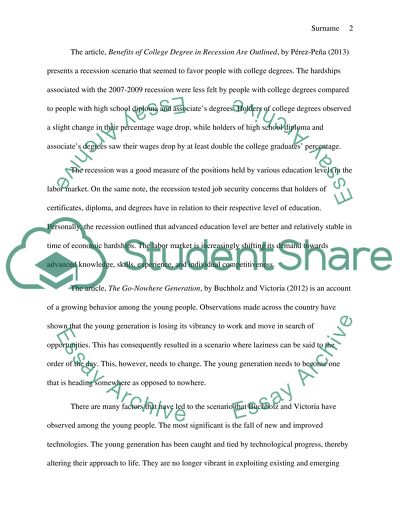 New York Times Articles The article, How to Bridge the Hiring Gap, by Goldfarb is based on employment trends in the country. The hiring process is approached from two different perspectives; from the employers and employees sides. For the employer, the concern is experience and personal competitiveness of college graduates in undertaking the underlying duties, roles, and responsibilities. The competitiveness and experience herein are influenced by the qualification of fresh graduates, an aspect that employers think many new entrants lack as they graduate. Goldfarb argues that disparities in hiring can be addressed through collaborative efforts between college graduates and employers on matters of knowledge, skills, and qualification.
The concerns highlighted by Goldfarb are relevant to any given individual seeking employment after graduating from college. Meeting employment requirements is a significant challenge for new labor market entrants. Most employers build qualification on the number of years of experience, thereby disregarding new graduates on the basis that they need more experience to secure an employment position. Experience comes after working and applying one’s knowledge and skills. Without experience, then new college graduates are likely to remain unemployed. Personally, graduate training could address this hiring paradox.
The article, Benefits of College Degree in Recession Are Outlined, by Pérez-Peña (2013) presents a recession scenario that seemed to favor people with college degrees. The hardships associated with the 2007-2009 recession were less felt by people with college degrees compared to people with high school diploma and associate’s degrees. Holders of college degrees observed a slight change in their percentage wage drop, while holders of high school diploma and associate’s degrees saw their wages drop by at least double the college graduates’ percentage.
The recession was a good measure of the positions held by various education levels in the labor market. On the same note, the recession tested job security concerns that holders of certificates, diploma, and degrees have in relation to their respective level of education. Personally, the recession outlined that advanced education level are better and relatively stable in time of economic hardships. The labor market is increasingly shifting its demand towards advanced knowledge, skills, experience, and individual competitiveness.
The article, The Go-Nowhere Generation, by Buchholz and Victoria (2012) is an account of a growing behavior among the young people. Observations made across the country have shown that the young generation is losing its vibrancy to work and move in search of opportunities. This has consequently resulted in a scenario where laziness can be said to the order of the day. This, however, needs to change. The young generation needs to become one that is heading somewhere as opposed to nowhere.
There are many factors that have led to the scenario that Buchholz and Victoria have observed among the young people. The most significant is the fall of new and improved technologies. The young generation has been caught and tied by technological progress, thereby altering their approach to life. They are no longer vibrant in exploiting existing and emerging opportunities. There is need to learn, understand, and balance generational issues with social, economic, and political progress at an individual level.
Works Cited
Buchholz, Todd, and Victoria Buchholz. “The Go-Nowhere Generation”. New York Times, March 10, 2012.
Goldfarb, Robert. “How to Bridge the Hiring Gap”. New York Times, November 10, 2012.
Pérez-Peña, Richard. “Benefits of College Degree in Recession Are Outlined”. New York Times, January 9, 2013. Read More
Share:
Tags
Cite this document
(“Arrticle #2 Essay Example | Topics and Well Written Essays - 500 words”, n.d.)
Arrticle #2 Essay Example | Topics and Well Written Essays - 500 words. Retrieved from https://studentshare.org/miscellaneous/1614348-arrticle-2

CHECK THESE SAMPLES OF Arrticle #2

... of opinions and the different perspectives of the members facilitate critical analysis of the evidences that is not only unbiased but also reasserts the democratic and fair value of the legal system. The upholding of the view point of the majority reaffirms the fairness of the judgement that is reached. It is therefore, important that the jury continue to play their part in the crown court with sincerity and knowledge based decisions. Reference Explaining the Responsibilities of the Jurors. Available from:
4 Pages(1000 words)Essay

...The proponent of the posted thought specifically explicated that border security means keeping illegal immigrants from coming to the United s undocumented. This is an interesting point, because this is just part of the general essential points linked to understanding the idea of border security. However, the author seems to have taken it literally, though I have not seen any mistake about it, but border security could mean more than the idea of understanding the physical boundary. It should significantly tell about the whole issue of security, by which citizens will have to consider their safety and protection. I am convinced that border security means more than just the concept of the legal documentation of people coming... proponent of the...
1 Pages(250 words)Essay

... ERG Theory and Maslow’s Hierarchy The needs of an individual influence the manner of their behavior. The ERG theory by Clayton Alderfer and the Maslow’s Hierarchy of needs by Abraham Maslow, have similarities and differences. One of the similarities of both theories is that they determine that the existence of needs acts as a motivation towards people’s behavior. Another similarity is that the results of the theories ensure the fulfillment of both physical and psychological needs of individuals (Baack, p. 23). In relation to the differences of the theories, the ERG theory determines that there exist three needs as compared to Maslow’s five needs in the hierarchy. Another difference is that the ERG theory considers a random... ERG Theory...
1 Pages(250 words)Assignment
sponsored ads
Save Your Time for More Important Things
Let us write or edit the essay on your topic "Arrticle #2" with a personal 20% discount.
GRAB THE BEST PAPER

Let us find you another Essay on topic Arrticle #2 for FREE!