Comments (0)
Add to wishlistDelete from wishlist
Cite this document
Summary
Plea bargain involves offering concessions in sentences and charges to encourage defendants to plead guilty and surrender their constitutional right of a jury trial. In operation, defendants who opt to exercise their right to a jury trial are deterred by fear of more prolonged…
Download full paperFile format: .doc, available for editing
HIDE THIS PAPERGRAB THE BEST PAPER94.6% of users find it useful 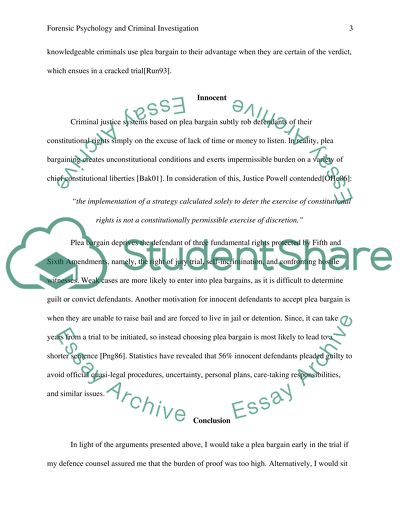 Forensic Psychology and Criminal Investigation number Publish Introduction Plea bargain involves offering concessions in sentences and charges to encourage defendants to plead guilty and surrender their constitutional right of a jury trial. In operation, defendants who opt to exercise their right to a jury trial are deterred by fear of more prolonged sentences and severe charges; consequently, 95% of defendants normally prefer plea-bargaining (Grossman & Katz, 1983). Empirical research has revealed that higher crime levels and greater social emphasis on punishing guilty offenders leads to more plea-bargaining. As opposed to this, lower crime rate and greater social emphasis on not punishing innocent offenders’ leads to avoidance of plea-bargaining.
Guilty
Plea bargaining is seen to let ‘professional’ criminals get off the hook too easily as they are familiar with the criminal justice system (Miceli, 1996). There are evident advantages for guilty offenders to opt for plea bargain as it significantly reduces their sentence as per the Sentencing Guidelines Council (2007) despite convincing evidence. Similarly, imprisonment may be substituted by alternatives such as home detention, probation period, or community service and even immediate release. Sexual offenders can greatly benefit by pleading guilty to violent behaviour instead of sexual charges that would save them from public registration, special discharge terms, and restricted parole conditions. A defendant who is found guilty of a serious felony in a jury trial on average receives a prison sentence twice of that offered in plea bargain for the same crime (Soni & McCann, 1996). The point of time in a trial when a defendant negotiates plea bargain is critical as it significantly affects sentencing. The Runciman Report demonstrated how knowledgeable criminals use plea bargain to their advantage when they are certain of the verdict, which ensues in a cracked trial (Runciman, 1993).
Innocent
Criminal justice systems based on plea bargain subtly rob defendants of their constitutional rights simply on the excuse of lack of time or money to listen. In reality, plea bargaining creates unconstitutional conditions and exerts impermissible burden on a variety of chief constitutional liberties (Baker & Mezzetti, 2001). In consideration of this, Justice Powell contended (OHear, 2007):
“the implementation of a strategy calculated solely to deter the exercise of constitutional rights is not a constitutionally permissible exercise of discretion.”
Plea bargain deprives the defendant of three fundamental rights protected by Fifth and Sixth Amendments, namely, the right of jury trial, self-incrimination, and confronting hostile witnesses. Weak cases are more likely to enter into plea bargains, as it is difficult to determine guilt or convict defendants. Another motivation for innocent defendants to accept plea bargain is when they are unable to raise bail and are forced to live in jail or detention. Since, it can take years from a trial to be initiated, so instead choosing plea bargain is most likely to lead to a shorter sentence (Png, 1986). Statistics have revealed that 56% innocent defendants pleaded guilty to avoid official quasi-legal procedures, uncertainty, personal plans, care-taking responsibilities, and similar issues.
Conclusion
In light of the arguments presented above, I would take a plea bargain early in the trial if my defence counsel assured me that the burden of proof was too high. Alternatively, I would sit out and wait for the right time to plea bargain in case that my defence counsel told me that the burden of proof was weak or perhaps circumstantial. This position would stand true whether I am charged with a heinous or a non-heinous crime. In addition, it is clear that the real loser of reduced sentences due to plea bargains is naive offenders who fear and mistrust the judicial system due to their inexperience. The more experienced offenders learn to bank on the system to derive whatever possible benefit through plea bargaining.
References
Baker, S., & Mezzetti, C. (2001). Prosecutorial Resources, Plea Bargaining, and the Decision to Go to Trial. Journal of Law Economics Organization 17(1) , 149-167.
Grossman, G. M., & Katz, M. L. (1983). Plea Bargaining and Social Welfare. American Economic Review 73(4) , 749-757.
Miceli, T. J. (1996). Plea Bargaining and Deterrence: An Institutional Approach. European Journal of Law and Economics 3(3) , 249-264.
OHear, M. M. (2007). The End of Bordenkircher extending the logic of Apprendi to Plea Bargaining. Washington University Law Review 84 , 835-849.
Png, I. P. (1986). Optimal Subsidies and Damages in the Presence of Judicial Error. International Review of Law and Economics 6 , 101-105.
Runciman, V. (1993). The Royal Commission on Criminal Justice Report. London: The Stationery Office (TSO).
Soni, A., & McCann, M. E. (1996). Guilty Pleas. Georgetown Law Journal 84 , 1039. Read More
Share:
Tags
Cite this document
(“Forensic Psychology and Criminal Investigation Essay - 9”, n.d.)
Forensic Psychology and Criminal Investigation Essay - 9. Retrieved from https://studentshare.org/miscellaneous/1613540-forensic-psychology-and-criminal-investigation

CHECK THESE SAMPLES OF Forensic Psychology and Criminal Investigation

...Currently, the number of crimes committed has been increasing with the technology applied continuously advancing. This has raised concerns among various stakeholders. Forensic investigation has been playing a significant role in identifying the criminals. This is achieved by the use of a well-defined strategies and equipped laboratories. Computer Forensic Process: a guideline for best practices is sequence of steps or set of procedures, which plays a very important part in supporting the forensic examiner to protect the digital evidence. By protecting the evidences, the examiner builds a strong case and avoids dismissal of the case in the court. This...
13 Pages(3250 words)Essay

...organizations have become subjects of fraudent practices due to the lack of proper forensic accounting systems focusing on business intelligence. The research will help highlight this issue and evolve ways and means to counter the same. 1.3 What could this research shed light on? There have been a number of researches conducted on this topic. However there is still scope for conducting further research because it will identify the significance of business intelligence in order to take efficient decisions in the business. More over, with the passage of time and the advancement in technology, various aspects of business and accounting keep transforming. Therefore, fresh research will help in addressing the changes that...
4 Pages(1000 words)Research Paper

...Forensic Psychology and Criminal Investigation number PART Introduction Pornography serves as a potent teacher of both, deviant perspectives and behaviours. Although, most reactions in humans are innate and instinctive, yet the majority of our behaviour and beliefs are acquired and learned. Once learnt, such beliefs become acceptable, thus stimulating humans to indulge in them. Is violent pornography cathartic in preventing sex offenders from offending? The majority of research on pornography has resulted in categorically opposed conclusions to the above statement. Studies reveal that pornography acts as a teacher, permission-giver, and final trigger of various sexually...
5 Pages(1250 words)Essay

...Forensic Psychology and Criminal Investigation number 9 November PART Introduction Psychopathy also known as psychopathic, antisocial, or dissocial personality disorder has been the centre of international forensic research for decades. Like other disorders, pyschopathy tends to have adverse effect on the ability of an individual to relate to one’s self, others, or the environment. In interpersonal interactions, psychopaths exhibit arrogance, callousness, manipulation, deceit, lack of empathy and remorse, inability to form strong emotional ties. Additionally, they are prone to parasitic lifestyle, delinquency, impulsiveness, and sensation-seeking (Goldstein, 2003). Psychopathy counter-productive for risk assessment and management... ...
5 Pages(1250 words)Essay

...Forensic Psychology and Criminal Investigation number Publish Part One Introduction People affected by learning and developmental disorders need to be considered distinctly through forensic and criminal investigations given their differentiated methods of coping with emotions as well as social norms and values. Depending on the nature of the offender’s or participant’s learning or developmental disorders, the investigator needs to consider how the participant’s or offender’s response might have differed from a normal person’s response in the same situation. These differences tend to skew the...
5 Pages(1250 words)Essay

...Forensic Psychology number Publish Part One Introduction In the current case of Leonard C. Thornhill, it is noticeable that the offender is on an increasingly risky behaviour of re-offending. As stated, in the last five years, the offender has not been subject to any major offences except for one complaint regarding cannabis use outside and inside his premises. However, search of the premises produced long knives that the offender could not properly account for indicating some form of inclination for violence. These events coupled with the recent sexual abuse charge placed by Miss Valery Aberdeen indicate that the offender’s risk for reoffending is increasing and needs to be dealt with at the earliest...
5 Pages(1250 words)Case Study

...Misconceptions In Mass Media and Academic Community regarding BIAs In my review I chose to work on an article by three authors dubbed The Usefulness of criminal profiling. This is a critical review of the methods used by Behavioral Investigative Advisors in their work of profiling criminals. The article argues that no empirical evidence or scientific evidence exists to back claims of its ability to solve crimes. It dispels the notion that that Douglas and Dodd ‘delved into the swamp like the minds of the murderers (Douglas and Dodd, 2007). The book cites lack of scientific evidence as an impediment in asserting BIAs method. The article raises concerns on two fronts. One is the lack of...
2 Pages(500 words)Essay

Let us find you another Essay on topic Forensic Psychology and Criminal Investigation for FREE!