Comments (0)
Add to wishlistDelete from wishlist
Cite this document
Summary
The policies and the experiments that determined the phase and dominance of free market flourished greatly. The main aim of the policy was to improve the industry performance and ensure equal availability of…
Download full paperFile format: .doc, available for editing
HIDE THIS PAPERGRAB THE BEST PAPER94.2% of users find it useful 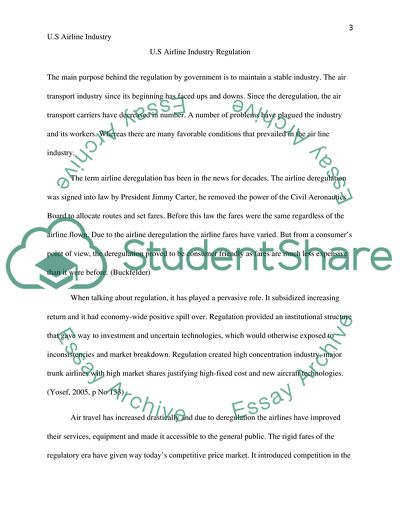 U.S AIRLINE INDUSTRY REGULATION The paper determines the result of airline industry deregulation. The policies and the experiments that determined the phase and dominance of free market flourished greatly. The main aim of the policy was to improve the industry performance and ensure equal availability of airline facilities to every passenger. The paper also discusses the pros and cons of regulation and deregulation and the need of air line industry to be reregularized.
U.S Airline Industry Regulation
The main purpose behind the regulation by government is to maintain a stable industry. The air transport industry since its beginning has faced ups and downs. Since the deregulation, the air transport carriers have decreased in number. A number of problems have plagued the industry and its workers. Whereas there are many favorable conditions that prevailed in the air line industry.
The term airline deregulation has been in the news for decades. The airline deregulation was signed into law by President Jimmy Carter, he removed the power of the Civil Aeronautics Board to allocate routes and set fares. Before this law the fares were the same regardless of the airline flown. Due to the airline deregulation the airline fares have varied. But from a consumer’s point of view, the deregulation proved to be consumer friendly as fares are much less expensive than it were before. (Buckfelder)
When talking about regulation, it has played a pervasive role. It subsidized increasing return and it had economy-wide positive spill over. Regulation provided an institutional structure that gave way to investment and uncertain technologies, which would otherwise exposed to inconsistencies and market breakdown. Regulation created high concentration industry, major trunk airlines with high market shares justifying high-fixed cost and new aircraft technologies. (Yosef, 2005, p No 133)
Air travel has increased drastically and due to deregulation the airlines have improved their services, equipment and made it accessible to the general public. The rigid fares of the regulatory era have given way today’s competitive price market. It introduced competition in the industry and airline fares. It proved as a successful step for commercial airlines, the airlines could now set their own policies; determine the fares without any government intervention and expect high level of profits. Although the industry gained a lot from deregulation but few draw backs also flourished. The industry had unionized workforce that flourished on inefficiency and generous salaries, it proved to be a problem for a competitive industry. We cannot rule out that the aftermath of September 11, 2001 terrorist attack proved to be a hardship for the free market airline industry. Although the industry faced boom in the earlier period, hub-and-spoke systems decreased the unit costs but it created high fixed cost that required large number of investment and technology systems. On the other hand 9/11 attack added fuel to the fire in the industry. The net losses increased as the high fuel prices, labor problems and most importantly the fear of terrorism increased and added further drag to the industry’s downfall. (Smith & Cox)
The airline industry is a mixture of competitive and regulatory industry. There are several policies that affected the level of competition. In the airline industry different firms set the prices and routes, according to different market conditions. Due to deregulation the profits have fluctuated towards growth and left a positive impact of deregulation. (Gowrisankaran, 2002)
The quarter-century that followed deregulation took many attempts of innovations in the industry. Many proved successful and a few needed refinements. Due to changes in institutional policies and innovation in business practices, the phase witnessed increase in monopolistic power, whereas other strategies brought competition in the industry. Different experiments like emergence of hub-control, the deregulatory phase presented a different approach to low-control services. It brought evolution in standard and quality replaced the previously dominant industry. (Williams & Weiss, 2005)
When talking about the studies by academic economists, they were keen and positive about the deregulation of domestic airlines. Since the imposition of the deregulation the economists continued an extensive study on the industry. The study concluded which was also the prediction of many of the economists that deregulation would improve the consumer welfare. Even after 14 years this prediction is still collaborative, and the outcomes of the deregulation vary considerably. (Borenstien, 1992)
Moreover, re-regulation is being looked forward to as in opinion of many deregulation is overestimated, considering the financial crisis, monopolistic market trends. Therefore, it’s time to regulate the airline industry. The industry needs billions of dollars for maintenance and construction. It has become impossible for the industry to compete in the market, as in the past decade the fuel prices have increased and the profits are decreasing. The industry itself is realizing the need of change in policy, not completely regularization but a partial regularization can significantly help the downfall. (Longman, 2012)
Conclusion
The U.S airline industry since its deregulation has undergone significant surprising changes. Well established airlines failed, whereas others gained significant importance and limelight. The aftermath of this policy was featured my media and press, resulting the industry to be subjected of excessive competition or becoming excessively concentrated. Hence, it’s needed that a partial regularization must be adopted to decrease the drawbacks of deregulation.

...?The airline industry is one of the most powerful industries in the world. In this industry generated $712 billion in sales in the US and 986billion worldwide (Plunkett Research). The demand and supply of airline tickets varies a lot by season. In the good season which is Christmas and summer the demand for airline travels goes up. During this season since the supply cannot keep up with the demand the prices of air travel tickets goes up. During low season the airlines utilize a lower pricing strategy in order to attract more customers. As prices goes down the demand for air travel rises. During off season the supply of...
2 Pages(500 words)Coursework

...Regulation of Airline Industry The deregulation of the US airline industry in 1978 has brought about myriad economic benefits for both airline companies and their customers. However, current problems in the industry have raised the question of whether government regulation may be indeed crucial in addressing prevailing conditions. This paper discusses the need as well as the extent by which government should exercise control over the airline industry. Need for Government Regulation To some degree, government regulation may be deemed...
2 Pages(500 words)Essay

...Government Control in Airline Safety The government should have control over airline regulations since it concerns public safety. The case of the 9/11 attack is a grim reminder that there is always a potential threat to American nation due to its political inclinations globally. Aside from the safety factor, the airline industry must be regulated to protect the consumer rights of the passengers since monopoly is existent which results to high travel fare. Moreover, decrease in airline profitability can be correlated with air accidents due to a tarnished brand name. This paper then intends to propose to the Board of...
2 Pages(500 words)Essay

...Discuss how recent changes in the law may impact on the tourism and hospitality industry – the case of the airline industry Introduction In most countries worldwide, the increase of complexity of business activities has resulted to the update of the legal framework on which these activities are based. One of the priorities of legislators involved in this task is to ensure that the rights of the public are adequately protected. However, measures need to be taken also for the support of the entrepreneurship as a factor contributing to the development of the local economy. In practice, it has been proved that the development of legislative texts for the regulation of various industrial sectors can be a challenging task. A series... measures are...
7 Pages(1750 words)Essay

...are to recognise risk and handle it in the methods they manage their operational environment. The aviation service provider is also mainly responsible for safety management (Federal Aviation Administration, 2006). Federal Aviation Administration is responsible for regulating airlines and upholding air safety. It is reducing real inspections of airplanes by its own staff by means of electronic-surveillance system that relies much on statistical analysis and reporting by the airlines themselves. Since 2001, airline industry has not faced a major accident due to its maintenance of safety. But smaller accident occurred in recent years (Consumer Reports,...
13 Pages(3250 words)Essay

Let us find you another Essay on topic U.S. Airline Industry Regulation for FREE!