Comments (0)
Add to wishlistDelete from wishlist
Cite this document
Summary
However, the founders designed the Constitution so that the military serves the people, instead of vice versa. Soldiers and civilians have the same civil rights,…
Download full paperFile format: .doc, available for editing
HIDE THIS PAPERGRAB THE BEST PAPER96.9% of users find it useful 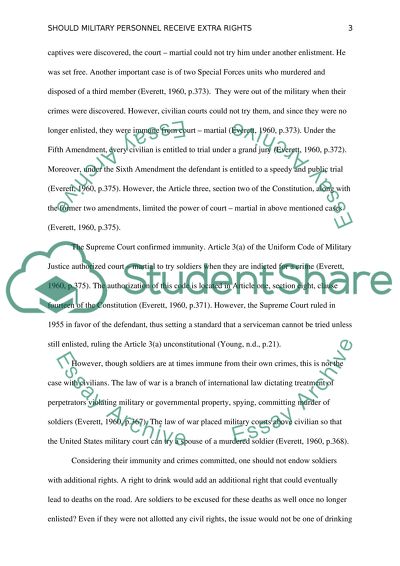 Should Military Personnel Receive Extra Rights GP week 2 Drinking has become an issue with regard to soldiers, as some believe that the legal age should be lowered to 18. However, the founders designed the Constitution so that the military serves the people, instead of vice versa. Soldiers and civilians have the same civil rights, except that the former are not allowed to run for office while still on duty. However, civilians are at times subject to military laws, whereas soldiers can avoid civilian courts. The rules applying to the civilians, such as the duty not to kill another fellow human being, do not apply to soldiers who managed to hide their crime for a sufficient amount of time. As a result, the military should not be any different from civilians in their rights, including drinking, if the crimes in our society are to be prevented and punished.
Soldiers have almost the same civil rights as civilians. The Congress passed civil rights laws ensuring that soldiers’ civil rights are no different from those of civilians. Moreover, as any civilian, a soldier is entitled to an attorney, marriage, voting, inheritance and several other rights. However, unlike civilians, soldiers are not allowed to run for office, be it partisan or nonpartisan, especially if it conflicts with their duties (Globalsecurity.org, 2012).
There are arguments that soldiers should in fact have more rights. They have more duties. As a result, one could argue that soldiers too could be allotted some additional rights. In 2010, there was a discussion in the Congress that drinking age should be returned to 18 for soldiers. The argument was that if they are considered adults enough to die for their country, then they can be adults with a beer in their hand too, regardless of the fact that alcohol caused over 25,000 deaths in 2009 (Bishop, 2010; Kochanek et al., 2011, p.11). The bill was rejected.
Historically, there was a way for soldiers to become immune in front of the court – martial. Such example was in Hirshberg v. Cooke (1949), where a soldier was in captivity by the Japanese (Everett, 1960, p.373). He was released, discharged from the Navy and then reenlisted the following day (Everett, 1960, p.373). However, when his crimes against other captives were discovered, the court – martial could not try him under another enlistment. He was set free. Another important case is of two Special Forces units who murdered and disposed of a third member (Everett, 1960, p.373). They were out of the military when their crimes were discovered. However, civilian courts could not try them, and since they were no longer enlisted, they were immune from court – martial (Everett, 1960, p.373). Under the Fifth Amendment, every civilian is entitled to trial under a grand jury (Everett, 1960, p.372). Moreover, under the Sixth Amendment the defendant is entitled to a speedy and public trial (Everett, 1960, p.375). However, the Article three, section two of the Constitution, along with the former two amendments, limited the power of court – martial in above mentioned cases (Everett, 1960, p.375).
The Supreme Court confirmed immunity. Article 3(a) of the Uniform Code of Military Justice authorized court – martial to try soldiers when they are indicted for a crime (Everett, 1960, p.375). The authorization of this code is located in Article one, section eight, clause fourteen of the Constitution (Everett, 1960, p.371). However, the Supreme Court ruled in 1955 in favor of the defendant, thus setting a standard that a serviceman cannot be tried unless still enlisted, ruling the Article 3(a) unconstitutional (Young, n.d., p.21).
However, though soldiers are at times immune from their own crimes, this is not the case with civilians. The law of war is a branch of international law dictating treatment of perpetrators violating military or governmental property, spying, committing murder of soldiers (Everett, 1960, p.367). The law of war placed military courts above civilian so that the United States military court can try a spouse of a murdered soldier (Everett, 1960, p.368).
Considering their immunity and crimes committed, one should not endow soldiers with additional rights. A right to drink would add an additional right that could eventually lead to deaths on the road. Are soldiers to be excused for these deaths as well once no longer enlisted? Even if they were not allotted any civil rights, the issue would not be one of drinking age, but of handing them the rights every civilian has. Thus, the issue of drinking too should be looked at through the same legal lens. Once civilians are allowed to drink, soldiers will be as well. Until then, let us not forget that soldiers’ duties are larger than civilians’.
References
Bishop, B. (2010, September 2). Georgia congressman proposes lowering drinking age on
military bases. News Channel WJBF. Retrieved from http://www2.wjbf.com/news/2010/sep/02/georgia-congressman-proposes-lowering-drinking-age-ar-780840/
Everett, R.O. (1960). Military jurisdiction over civilians. Duke Law Journal, 1960, 366 – 415.
Retrieved from http://scholarship.law.duke.edu/cgi/viewcontent.cgi?article=1304&context=faculty_scholarship
GlobalSecurity.org (2012). Soldiers’ rights, responsibilities and duties. Retrieved from
http://www.globalsecurity.org/military/library/policy/army/fm/27-1/Ch10.htm
Hirshberg v. Cooke, 336 U.S. 210 (Sup.C. 1949).
Kochanek, K.D., Xu, J., Murphy, S.L., Minino, A.S. and Kung, H.S. (2011). Deaths: Final
data for 2009. National Vital Statistics Reports, 60 (3), 1 – 116. Retrieved from http://www.cdc.gov/nchs/data/nvsr/nvsr60/nvsr60_03.pdf
Young, L.E. (n.d.). Military law: The jungle of jurisdiction. Retrieved from
http://www.wcl.american.edu/journal/lawrev/05/military_law.pdf Read More
Share:
Tags
Cite this document
(“Should Military Personnel Receive Extra Rights GP week 2 Essay”, n.d.)
Should Military Personnel Receive Extra Rights GP week 2 Essay. Retrieved from https://studentshare.org/miscellaneous/1612206-should-military-personnel-receive-extra-rights-gp-week-2

... The Breakfast Club It was a fine Saturday morning when Andy, John, Brian, Claire, and Allison were sent to detentionat Shermer High School under the watch of Mr. Vernon. All of them represent the stereotypes of not only the academic world, but the society per se. The point of detention, for Mr. Vernon, was for the kids to reflect on why they were there and learn from their mistakes. Nonetheless, as the story progresses, they were able to do more than just reflect; they were able to look beyond their differences and share their stories and similarities. It all started when John, the rebel in the group, started bullying everybody in detention. As normal as it is, Andy, the popular member of the wrestling team, defended everyone... The...
3 Pages(750 words)Essay

..., a manual can be handed out to any random person that he/she should start with any word. That same person will ask the next person to continue with any other word. For example, the person with the manual states ‘I’, the person next to him might say ‘am’ and this continues on. Not only it shows dependency on other team members which illustrates that team work is important, it creates humor when people can come up with any random words, hence breaking the ice! The people will know each other names, dependency will increase the chances of developing friendships between people, and humor will also help establish friendships. Also throughout the course of the session, the blind and the hidden areas can come into prominence as...
2 Pages(500 words)Essay

Military Personnel and its Benefits

...﻿Do Military Personnel get Enough Benefits? There is no denying the fact that army is a profession that is very unlike any other profession. No other profession pledges to sacrifice one’s life in the line of duty. However, in army, each and every soldier and officer begins one’s career by taking an oath to not to hesitate from sacrificing one’s life, while protecting the nation and the citizens. Hence, in an idealistic context, the relevant question is not as to whether military personnel get enough benefits, but rather, is there any benefit that could be deemed to be enough for military personnel? Sadly, the mundane world is governed by economical and strategic constraints. Still, in a starkly pragmatic context, the reality... is that in...
2 Pages(500 words)Essay

...Client’s December Globalisation and the IT explosion in the past decades have brought benefits as well as challenges to the management of projects and the resources located across the globe. Project management includes resource management, and resources are of many types. Understanding of the different resources and their management is important for strategic project management. This literature review examines the work of researchers in three areas of resource management: skills (competencies) and assets management; knowledge management; and challenges and benefits in virtual team management. While the literature reviewed in assets and skills management shed a lot of light on the different aspects of this subject, the literature... December...
2 Pages(500 words)Essay

...information about cybercrime and its related offences and outcomes. The essay as a whole provides an in depth look into the issue of cybercrime. Through a company case study, the essay affirms the need for a proper and functional intrusion system to be used to mitigate cybercrimes. Keywords: information, technology, cybercrime, intrusion Security Flaws Regions which require high security are those with valuable items, potentially dangerous materials, and information. The ease of intrusion depends on the security system used. It is essential that the system implemented meets the intended function. The system’s function should be carefully monitored to understand its weakness and strengths. The understudy company uses the...
2 Pages(500 words)Assignment

...The proponent of the posted thought specifically explicated that border security means keeping illegal immigrants from coming to the United s undocumented. This is an interesting point, because this is just part of the general essential points linked to understanding the idea of border security. However, the author seems to have taken it literally, though I have not seen any mistake about it, but border security could mean more than the idea of understanding the physical boundary. It should significantly tell about the whole issue of security, by which citizens will have to consider their safety and protection. I am convinced that border security means more than just the concept of the legal documentation of people coming...
1 Pages(250 words)Essay

...of the needs in the hierarchy, whereas Maslow’s theory considers a systematic satisfaction of the needs starting from the bottom to the top. The third difference also relates to the movement within the hierarchy (Loh, Dawn, & Schapper, p. 14). The ERG theory states that a person can move backwards in the satisfaction of their needs, while Maslow’s theory states that once a need is satisfied the situation becomes permanent. I have applied the ERG theory in various ways. For instance, there was a time when I became sick and had an admission at the hospital. The treatment took a whole week and I could not manage to pay the bill because the money I had was meant for the college semester that followed. However, I had to...
1 Pages(250 words)Assignment

...Film Review on Financial Crisis The CNBC Subprime Mortgage Special - House of Cards gives an explanation of the global financial crisis. David Faber, a CNBC reporter, effectively investigates the factors that led to the international financial meltdown. The film illustrates first person accounts by the key stakeholders; for example, investment bankers, home buyers, and also the mortgage brokers. Majority of the stakeholders allowed financial greed to blindly influence their financial decisions. The resultant effect was a major international financial collapse, since the period of the Great Depression. The Credit Crisis is a short video by Jonathan Jarvis, which illustrates the 2007 international financial crisis. It is very... Review on...
2 Pages(500 words)Movie Review

Let us find you another Essay on topic Should Military Personnel Receive Extra Rights GP week 2 for FREE!