Comments (0)
Add to wishlistDelete from wishlist
Cite this document
Summary
However, due to the perceptions of both the settled communities and the nomads, there were frequent cases of theft and violent raids…
Download full paperFile format: .doc, available for editing
HIDE THIS PAPERGRAB THE BEST PAPER92.9% of users find it useful 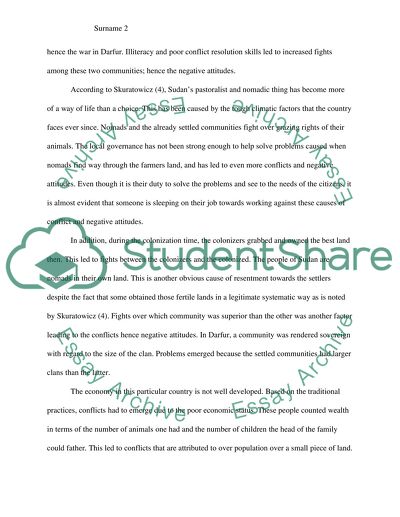 Extract of sample "History The World"

Download file to see previous pages Competition for such resources as land marked top of the list. This is because the nomads made their temporary homes in favorable places. Being an arid area, water was scarce. Farmers always fought over the small rivers that provided water for the large numbers of tribes. In some cases, the nomads made the temporary homes along the rivers to feed and water their camels and other domestic animals. Other resources like pasture and climate contributed to the choice of temporary homes for the nomads. Again, the nomads held a notion that the settled communities were rich and had lots of private property. This led to raids and theft marking another cause of resentment. Skirmishes erupted from these raids and increased theft hence the war in Darfur. Illiteracy and poor conflict resolution skills led to increased fights among these two communities; hence the negative attitudes.
According to Skuratowicz (4), Sudan’s pastoralist and nomadic thing has become more of a way of life than a choice. This has been caused by the tough climatic factors that the country faces ever since. Nomads and the already settled communities fight over grazing rights of their animals. The local governance has not been strong enough to help solve problems caused when nomads find way through the farmers land, and has led to even more conflicts and negative attitudes. Even though it is their duty to solve the problems and see to the needs of the citizens, it is almost evident that someone is sleeping on their job towards working against these causes of conflict and negative attitudes.
In addition, during the colonization time, the colonizers grabbed and owned the best land then. This led to fights between the colonizers and the colonized. The people of Sudan are nomads in their own land. This is another obvious cause of resentment towards the settlers despite the fact that some obtained those fertile lands in a legitimate systematic way as is noted by ...Download file to see next pagesRead More
Share:
Tags
Cite this document
(“History The World Essay Example | Topics and Well Written Essays - 1000 words”, n.d.)
History The World Essay Example | Topics and Well Written Essays - 1000 words. Retrieved from https://studentshare.org/miscellaneous/1610538-history-the-world

CHECK THESE SAMPLES OF History The World

Psychology of Okonkwo in Things Fall Apart by Chinua Achebe

12 Pages(3000 words)Case Study
sponsored ads
Save Your Time for More Important Things
Let us write or edit the essay on your topic "History The World" with a personal 20% discount.
GRAB THE BEST PAPER

Let us find you another Essay on topic History The World for FREE!