Comments (0)
Add to wishlistDelete from wishlist
Cite this document
Summary
Eventually Israel efforts were successful in occupying the East Jerusalem. The biggest clash between the two nations was their religion and beliefs. Israel imposed their…
Download full paperFile format: .doc, available for editing
HIDE THIS PAPERGRAB THE BEST PAPER96.7% of users find it useful 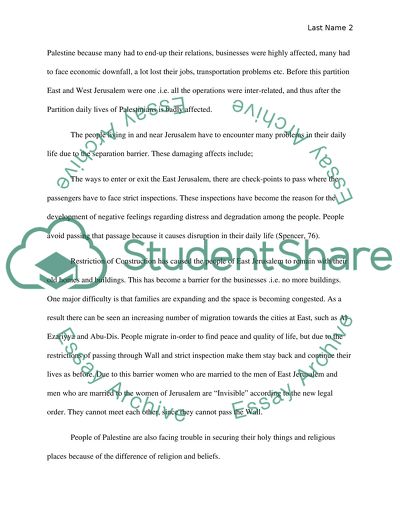 PALESTINE The conflict between Jerusalem (Arabs) and Israel (Jews) has taken its flight in the early 20th century.Eventually Israel efforts were successful in occupying the East Jerusalem. The biggest clash between the two nations was their religion and beliefs. Israel imposed their policies, law and Jurisdiction in order to maintain control and population management over the people of Palestine. The lives of the people living in Jerusalem were highly affected and as a result of these regulations. But the Government applied these techniques in order to prevent the formation of stronger Arab groups that can be danger for the Government and their control policies.
Under these techniques the Israeli Government restricted the citizenship for population of East Jerusalem; they also demolished the illegal houses. Government limited the city budget, and most of it evacuated the Palestinians who were living at West Bank. Due to these actions of the Government, people of Palestine felt threat to their homes and simultaneously their livings.
Government in 2002 established a Separation Wall around East Jerusalem, this Wall separated the relations. People living inside the barrier were forced to be divided and had to disrupt their connections with the people left outside. This caused difficulty for the people of Palestine because many had to end-up their relations, businesses were highly affected, many had to face economic downfall, a lot lost their jobs, transportation problems etc. Before this partition East and West Jerusalem were one .i.e. all the operations were inter-related, and thus after the Partition daily lives of Palestinians is badly affected.
The people living in and near Jerusalem have to encounter many problems in their daily life due to the separation barrier. These damaging affects include;
The ways to enter or exit the East Jerusalem, there are check-points to pass where the passengers have to face strict inspections. These inspections have become the reason for the development of negative feelings regarding distress and degradation among the people. People avoid passing that passage because it causes disruption in their daily life (Spencer, 76).
Restriction of Construction has caused the people of East Jerusalem to remain with their old homes and buildings. This has become a barrier for the businesses .i.e. no more buildings. One major difficulty is that families are expanding and the space is becoming congested. As a result there can be seen an increasing number of migration towards the cities at East, such as Al-Ezariyya and Abu-Dis. People migrate in-order to find peace and quality of life, but due to the restrictions of passing through Wall and strict inspection make them stay back and continue their lives as before. Due to this barrier women who are married to the men of East Jerusalem and men who are married to the women of Jerusalem are “Invisible” according to the new legal order. They cannot meet each other, since they cannot pass the Wall.
People of Palestine are also facing trouble in securing their holy things and religious places because of the difference of religion and beliefs.
The impact of the Separation barrier is very deep and influences the daily life of the Palestinians. It disrupts the daily activities of the people living in and around the Separation barrier.
Work Cited
Spencer, William. The Middle East. Guilford, Conn: Dushkin/McGraw-Hill, 1998. Print. Read More
Share:
Tags
Cite this document
(“Palestine Essay Example | Topics and Well Written Essays - 500 words”, n.d.)
Palestine Essay Example | Topics and Well Written Essays - 500 words. Retrieved from https://studentshare.org/miscellaneous/1609759-palestine

CHECK THESE SAMPLES OF Palestine

...Palestine-Israel Conflict Introduction: The history of the Arab world has been a stressful one. With the end of the Second World War it has been really challenging for the academia to neglect the conflicts between the Arab society and the Israel. The case of Palestine in particular has been more exigent. It is often confused with either a set of people or a nationality. Hence, writing about it implies going either against one party or another with reference to the self-determination that the small community has in pulling itself out of the shackles of the Zionist movement. The history goes as far as the time of Moses and his followers but that will be too lengthy to trace. However, one can connect to the...
13 Pages(3250 words)Essay

...Analysis of ‘Palestine’ by Joe Sacco In the past, I chose the comfort of avoiding concerns about global crises where politics, culture, and economy play vital functions that are often manipulated by the power bearers especially during war between nations. These are issues that appear too complicated to handle, but Palestine-Israel conflicts are equally exhausting issue to deal with that it loses appeal and makes large peace-making bodies lose interest themselves and I understand how exhausting it must have been. On reading Joe Sacco’s graphic creation ‘Palestine’, I had my personal encounter of Palestinians under tumultuous state of oppression. It was as if I inevitably swam from the...
2 Pages(500 words)Essay

... Palestine A less Nation A refers to a politically organized territory that has a permanent population and falls under a sovereign government administration which bears an international recognition. A stateless nation lacks these aspects and specifically lacks an independent state (Friend 1-3). The Kurds and the Palestinians form a good example of a stateless nation. Indeed, numerous numbers of people in the world are stateless and UNHCR estimates this figure to be more 12 million people considering that there are no reliable statistics to ascertain the actual number (“UN News Centre” 1). This population of people has no citizenship and its benefits and thus lacks full access to services offered by the reference government... health,...
6 Pages(1500 words)Essay

...ISRAEL AND PALESTINE Question What short of taking Hamas out of Power can be done to stop the blockade on Gaza Allowing Humanitarian aid through? There are few geopolitical issues as complex and difficult to solve as the conflict in the Middle East. It has a long and bloody history and many people have tried and failed to solve it before. Nothing new has happened in the last few years to make it any easier to solve. In fact, some things have gotten quite a bit worse. There is little visionary leadership available on either side. Basically, there are no good solutions in the region. This is a difficult situation. But the only way it will be solved is by sitting down and talking to one another with international help. It is...
6 Pages(1500 words)Research Paper

Adding value by analyzing an issue in a website

...unlike the Christians who believe in Jesus Christ and Muslims who believe in Allah. Consequences of Palestinian-Israel conflict on American economy and diplomacy. There are a number of demerits of the war between the Palestine’s and the Israelites to the American economy.Firstly, the economy will go down due to the fact that the fuel price will go up hence inflation. Secondly, America will use more finances in providing the military support. In addition, the American government have to use their military in calming the situation in the war affected areas in the Middle East. Furthermore, American government have to hold talks with the leaders of Israel and Palestine to try and restore peace in the area...
1 Pages(250 words)Essay

...as depicted in the different stands they take in negotiating showing the strong impact of culture on negotiations. This study aims at investigating the impact of Palestine culture on their negotiation through an in-depth analysis of the importance of face and loss of face to Palestinians in Negotiations and the type of negotiation styles to which they employ when negotiating. Language is the means through which a person’s culture is communicated from one generation to another is the best way to gauge the influence of culture on communication. The first negotiation technique used by the Palestinians is an admiration and frequent use of ambiguity in discourse showing that culture has a high impact on Palestinian...
5 Pages(1250 words)Term Paper

...Palestine Crisis The Palestine tragedy has a constant occurrence between the Israelites and the Arabs. The Arabs had in mindthat the issue is not only in Jerusalem but also on the entire land of Palestine. The review of the Palestine history shows that the current crisis arise due to the Al-Aqsa intifada known to introduce the recurring Palestinian prototype of economic despair, fratricide, miscalculation, religious radicalism and self-destruction. At he end of World War I, Britain and France prejudiced the League of Nations in giving them the quasi-colonial. It was because of their dominant positions in the league. The regimes belonging to Britain and France...
1 Pages(250 words)Assignment
sponsored ads
Save Your Time for More Important Things
Let us write or edit the essay on your topic "Palestine" with a personal 20% discount.
GRAB THE BEST PAPER

Let us find you another Essay on topic Palestine for FREE!