Comments (0)
Add to wishlistDelete from wishlist
Cite this document
Summary
Instead, he organized for the teaching of the 6 ministries by ordering Chong Ak to be their professor. The king encouraged the students by granting them silk and an…
Download full paperFile format: .doc, available for editing
HIDE THIS PAPERGRAB THE BEST PAPER97.1% of users find it useful 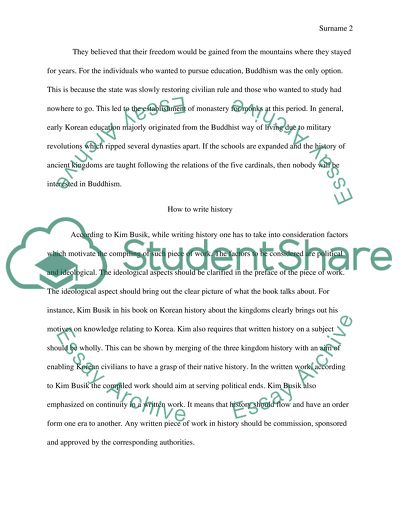 KOREAN HISTORY Military rule on civilians During the time of dynasties in Korea, “king Taejo wasted no time in building of schools to foster talents”. Instead, he organized for the teaching of the 6 ministries by ordering Chong Ak to be their professor. The king encouraged the students by granting them silk and an authority that worked towards their welfare. However, during the reign of king Kwangjong, education was taken seriously with a lot of seriousness. A Confucian academy was established by the royal authority. There was also a promotion of schools in the rural areas countrywide. This enabled individuals to hear poem recitations and tunes from string instruments. From the action in these schools, it is evident that literature in Korea was similar to that in China.
Following the military resistance which occurred towards the end of king Uijong’s rule and destruction of bad and good were done indiscriminately. Fugitives ran to the mountains and left their ranks and adopted the Buddhist’s way of life.(vol 1,pp 198)
They believed that their freedom would be gained from the mountains where they stayed for years. For the individuals who wanted to pursue education, Buddhism was the only option. This is because the state was slowly restoring civilian rule and those who wanted to study had nowhere to go. This led to the establishment of monastery for monks at this period. In general, early Korean education majorly originated from the Buddhist way of living due to military revolutions which ripped several dynasties apart. If the schools are expanded and the history of ancient kingdoms are taught following the relations of the five cardinals, then nobody will be interested in Buddhism.
How to write history
According to Kim Busik, while writing history one has to take into consideration factors which motivate the compiling of such piece of work. The factors to be considered are political and ideological. The ideological aspects should be clarified in the preface of the piece of work. The ideological aspect should bring out the clear picture of what the book talks about. For instance, Kim Busik in his book on Korean history about the kingdoms clearly brings out his motives on knowledge relating to Korea. Kim also requires that written history on a subject should be wholly. This can be shown by merging of the three kingdom history with an aim of enabling Korean civilians to have a grasp of their native history. In the written work, according to Kim Busik the compiled work should aim at serving political ends. Kim Busik also emphasized on continuity in a written work. It means that history should flow and have an order form one era to another. Any written piece of work in history should be commission, sponsored and approved by the corresponding authorities.
Moreover, written history should try to educate officials and scholars on the native heritage and how it transformed to the present state. A written should clearly spell out its objective in the written work and make sure that the targeted group is reached. Lastly, written history should be critical. This means that it should criticize the whole piece work. Kim Busik was critical in his book as tried to analyze the three kingdoms before merging them into one thing. Kim talked of the heritage of the three by contrasting and comparing them.
Works Cited
Peter H. Lee, ed., Sourcebook of Korean Civilization (New York: Columbia University Press, (1993), p. 464. Read More
Share:
Tags
Cite this document
(“KOREAN HISTORY Essay Example | Topics and Well Written Essays - 500 words”, n.d.)
KOREAN HISTORY Essay Example | Topics and Well Written Essays - 500 words. Retrieved from https://studentshare.org/miscellaneous/1609137-korean-history

CHECK THESE SAMPLES OF KOREAN HISTORY

What do any of us really know about love

...? South Korean History and Analysis of Social, Technological, Economic, Environmental and Political Issues Donna Purcell This paper does a steep analysis of South Korea through information from the US Department of State, South Korean Government and other sources. It begins with a brief historical overview spanning from BC2333 forward into predictions for 2015. The information includes social background information including the culture, language influences, and religion. Technological advances have brought South Korea into the 21st century through rapid growth. However, this has not come without a price. This is shown through the information on the economy, environmental concerns and...
9 Pages(2250 words)Research Paper

...?Korean Art History Reading Response Essay Kee argues that among the modern art blind spots, there is few apparent contemporary ink painting. Despite the fact that it makes a considerable amount of art making in Asia (particularly Southeast and East Asia) as duly displayed by the huge and enthusiastic collector base, it (ink painting) seldom features in the records or history of contemporary art. Critics view it as medium’s state of rebirth or crisis while the historians view it as a medium’s role to standard modernist movements like abstract expressionism. A number of initiatives have attempted to address the visible invisibility state. In the past decade, various initiatives have...
2 Pages(500 words)Book Report/Review

...? Modern Korean History The editor of The Independent presents a balanced and comprehensive history of modern Korea where they make an exploration of the social, economic and political issues that Korea has come across following its flung into the wider world as the sun was setting on the 19th century. Formerly, the Korean society was an insular society. By the virtue of being both ethnically and culturally homogeneous, the Korean society in the beginning became a prey of the Japanese imperialist expansionism.1 Later on, following the World War II, this society capricious split into two; with varied social and political systems as well as different...
6 Pages(1500 words)Essay

Is there a market for wool suits that are washable

...﻿ Antique Online is an explicit website serving as a gallery of Korean Arts and Handicrafts. This website has much to speak about the Korean culturalhistory and is highly influenced by both the cultural aspects and the historical aspects pertaining to Korea. As art forms and handicrafts are real reflection of the history and the culture of the specific area, this website which is an archive of the art and handicrafts of Korea, directly serves as an indicator of Korean culture and history. The introductory statement of the website itself state the further browsing through its WebPages as a journey through the Korean...
4 Pages(1000 words)Essay

...The Banes to the Society of Korea The Antecedents Korea, just like most Asian countries, was plagued with the fangs of colonialist and imperialist powers either for political or economic motives or both. These were almost all throughout the nation’s history among the remarkably evident of which was during the period spanning in the end term of the nineteenth century until the dawning of the twenty first. There were the pressures for commercial relations coming from Britain, Russia and Europe. At one point, the Koreans got so seriously offended by the intrusion of a Prussian trade campaign in 1866 that they burned the commissioned ship. When the Catholics were massacred by Taewon-gun, one of Korea’s...
6 Pages(1500 words)Essay

...Full 10 October Tears of Blood: The Atypical Transformation of Korean Precepts and Values The author viewed Korea as a country drowned in the influence of traditional philosophies, which dictated the ensuing chaotic history of the country. Pyongyang was blighted with violence brought about by the egocentric motives of the gentries. It was within the author’s belief that the looming conflicts were fallouts of the people’s inability to protect their own land – due perhaps to the Koreans’ compelled devotion towards traditional beliefs and lack of education; and the huge segregation between the rich and the wretched. The author’s ambiguity over Japanese colonization was motivated by the...
1 Pages(250 words)Assignment

...Korean history Question 2 The Chosŏn kingdom had a navy that was formed for the main purpose of making sure that maritime trade was safe from the Wokou pirates. In the history, the country had been frequently been attacked by pirates on both sea and land. At the time that the Japanese attacked the Chosŏn kingdom was unprepared for a number of reasons. The reasons are that: the factional court at Chosŏn kingdom was divided; they were unable to assess the extent of the abilities of the Japanese army; and failure of diplomacy attempts. Chosŏn’s first reaction to the attack by Japan was to create a Border Defense Council that was known as Pibyonsa, which comprised of both military and...
8 Pages(2000 words)Essay

...Korean Art History Research Paper Introduction Korea is among the countries with the richest cultural composition in the world.The Korean field of arts has evolved subsequently over the years. Many developments can be observed compared to past decades. The Korean government and other authorities have established various mechanisms for promoting the arts industry and preserving the ancient works. The LACMA is a renowned center for arts promotion and diversity. The Museums holds the works of art for various communities of the world. In addition, the works held in the Museum represent all ages, spanning from the ancient to the modern days. It is believed that the museum...
5 Pages(1250 words)Essay
sponsored ads
Save Your Time for More Important Things
Let us write or edit the essay on your topic "KOREAN HISTORY" with a personal 20% discount.
GRAB THE BEST PAPER

Let us find you another Essay on topic KOREAN HISTORY for FREE!