Comments (0)
Add to wishlistDelete from wishlist
Cite this document
Summary
The war begins on June 25, 1950 when approximately 75,000 troops from the North Korean People’s Army passed across the 38th parallel, the boundary between the Soviet backed Democratic People’s Republic of Korea to the…
Download full paperFile format: .doc, available for editing
HIDE THIS PAPERGRAB THE BEST PAPER94.1% of users find it useful 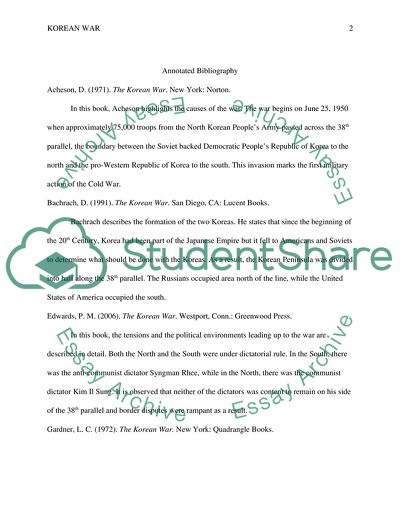 CHECK THESE SAMPLES OF Korean War

...? The Korean War The invasion occurred three years after the Second World War, and precisely the year 1950 marked the start of the war. North Koreans made surprise attacks on their weaker neighbors seeking unification of the two countries under one authority. The president of North Korea, Kim IL Sung, was loyal to communism and felt that, the south should join (Dutton, 2007). The north was an ally to other communist states, for example, USSR, and this served as a basis for support to the planned invasion. Kim IL Sung observed the importance of unifying the two Korean nations and it was the desire of the president of South Korea, Syng-Man Rhee to invade the North (Kim, 2012). The two countries survived under dictatorial regimes... that...
10 Pages(2500 words)Research Paper

...?The Korean War: origins and the military conflict The Korean War was a military conflict between the Republic of Korea, supported by the United Nations, and the Democratic People’s Republic of Korea and People’s Republic of China (PRC), with air support from Soviet Union. The war began on 25 June 1950 and an armistice was signed on 27 July 1953. The war was a result of the political division of Korea by agreement of the victorious Allies at the conclusion of the Pacific War. The Korean peninsula had been ruled by Japan from 1910 until the end of World War II. In 1945, following the...
6 Pages(1500 words)Term Paper

...?Why the Koreans Are Guilty for Not Giving a Unified Motherland to Their Children? Introduction The division between the North Korea and South Korea is not simply a matter of political geography. It is a division runs through millions of Koran people who are separated from each other by the Cold War of the twentieth century. According to Cumings, “[t]he thirty-eighth parallel not only cut through the center of Kaesong, the old home of the Koryo aristocracy and its capital, but ran along the southern slope of Mount Song’ak –perhaps right through the ancestral home of the Wangs, or through the royal residence that Wang Kon built on the same spot and called Manwoldae, or Full Moon Palace” (237). Needless to...
7 Pages(1750 words)Essay

...The Korean War is often called "The Forgotten War" The Korean War was a conflict between North Korea and South Korea. In North Korea, the war is called the Fatherland Liberation War, in South Korea it is referred to as 6.25 War, from the date that it started. While the USA refers to it as the Korean Conflict, mainly because they do not want the US Congress to declare it as a war and go through the necessary actions related to this declaration. It is the forgotten war because not much attention is given to it even though it is a major event in world history. This is because it took place between two of the most major events, World War II and the Vietnam War. (Micheal, 2001) The causes of the war were many. The initial cause... was that at the...
3 Pages(750 words)Essay

...the ROKA. After the visit, Hobbs went away enthusiastic about the work of KMAG and the Korean Army. Author John Gunther in Tokyo was told by General Headquarters (GHQ) that if war came in Korea, "The South Korean forces, 'The best Army in Asia,' could wipe out the North Koreans with no difficulty." GHQ in Tokyo was convincedas were the Army General Staff in Washington and numerous influential politicians who visited Korea. John J. Muccio, the U.S. ambassador to the Republic of Korea, was convinced by Roberts's assertion and passed on Roberts's view to Acheson that the Korean Army had the capability of containing the North Korean...
10 Pages(2500 words)Essay

...The political map of the world was dramatically changed after the end of World War II. With the fall of Nazism, as the allied forces led by the US and the communist forces led by the Soviet Union captured the previously occupied Nazi territories, an entirely new political balance of power existed. The Soviet army and government refused to retreat from the conquered territories of Europe and took control of it, not planning to relinquish it. And this was the situation, as the two superpowers were locked in a tight battle over control and influence around the world. This situation remained so until the Korean War, which changed everything and expanded the conflict to one with a worldwide scope. It was the first armed confrontation... of the...
4 Pages(1000 words)Essay

...Operation Ripper Operation Ripper was one of the most important United Nations offensives during the Korean War. This is because it was able to recapture Seoul, Koreas capital city. The plan for the operation was completed in March 2 and was started five days later as General Ridgways troops advanced to the city. On its first week, the offensive was delayed due to strong resistance but by March 13, significant gains were achieved and several days later, the enemy began to finally retreat and drove the North Korean and Chinese troops north of the 38th Parallel.1 The operation involved the entire divisions of Eighth Army as well as the airborne troops of the 187th Regiment Combat Team and the 2nd and 4th Ranger companies. A number... of the...
2 Pages(500 words)Essay

...Korean War al Affiliation) According to Halberstam (2007), the Korean War was a result of a combination of factors and events that followed the end of World War II, but the primary cause was North Korea’s act of invading the Republic of Korea (South Korea) by crossing the 38th parallel that separated the two nations. On 25th June 1950, North Korea crossed the 38th parallel into South Korea and took the major port of Pusan. As the North Koreans advanced rapidly into South Korea, the United States urged the UN Security Council to use the United Nations Charter to classify North Korea as an aggressor; the request was accepted and put into...
1 Pages(250 words)Essay

...Korean War At the beginning of the 19th century, Korea was under the influence of Japan, and the Japanese hadforced Korea to engage in international trade starting in 1876. Trade improved tremendously during this period (1876-1910) especially in the agricultural sector where corn and rice productivity was on the increase. The acceleration of development in Korea took effect in 1905 when Japan secured Korea as a colony from Russia. Japanese peasants and proprietors came into Korea and invested heavily in rice farming through improvement in technology such as irrigation and new rice seeds. The colonial started in 1910, which was marked by positive developments such as population growth because of...
1 Pages(250 words)Essay

...Korean War Korean War Korean War was the civil war that took place from June 1950 to July 1953 between the North and the South Korea. The communist North invaded the South with the primary cause of the war being division in Korea with the South being allies of United States, and the North being loyal to the Soviet Union. American troops soon entered the war in support of South Korea in the fight against international communism. Entry of USA into the war influenced the decisions of many countries including China. Entry of United States of America into the Korea war provoked China to intervene in the war because of the fear that USA would help the South conquer the North and acquire its territory.1 Chinese also wanted to safeguard... the...
2 Pages(500 words)Essay
sponsored ads
Save Your Time for More Important Things
Let us write or edit the annotated bibliography on your topic "Korean War" with a personal 20% discount.
GRAB THE BEST PAPER

Let us find you another Annotated Bibliography on topic Korean War for FREE!