Comments (0)
Add to wishlistDelete from wishlist
Cite this document
Summary
Its theme is inspired by medieval art manifested by the elaborate geometric details. Its shape is unusually abstract. It rather…
Download full paperFile format: .doc, available for editing
HIDE THIS PAPERGRAB THE BEST PAPER95% of users find it useful 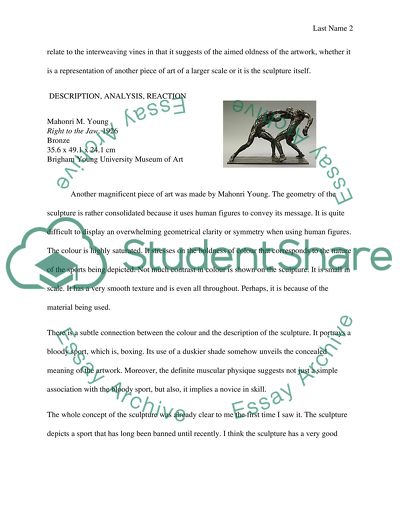 ANALYSIS, REACTION [Artist’s of Work, Year] [Medium e.g. Clay, Wood, etc Dimensions] Brigham Young Museum of Art
One of the most appealing qualities of the sculpture is its underlying symbolism hidden by the intricacies of its shape, texture, colour and design. Its theme is inspired by medieval art manifested by the elaborate geometric details. Its shape is unusually abstract. It rather depicts an animal horn with engraved archaic alphabets. Its overall exterior motif is embellished with some delicately intertwined stem-like creepers that form a mesh, giving the sculpture an entirely unique design. It is made of clay. Its texture ranges from rough to smooth to uneven. Some portions have smooth textures – those areas where the interweaving takes place; but there are also sections that appear to have coarse feel and appearance – areas near the horn-like edge right on its crest. The sculpture takes a relatively miniature scale of some symbolic gothic structures of Greece or Italy. It is quite symmetrical although there are fragments that look distorted, perhaps because of age; and the colour is much more saturated than pale.
I think that there is an original intention to express oldness or flow of time. The sculpture overall resembles a diminutive figure of an archaic piece of structure that is adhered by the wild vines or some type of lianas or trailing plants. This adherence is emphasized in order to retain the underlying meaning of this particular artwork, that is, “the fleeting of time”, regardless of the extent at which this artwork shall exist. The inscription of some unfamiliar scripts or symbols relate to the interweaving vines in that it suggests of the aimed oldness of the artwork, whether it is a representation of another piece of art of a larger scale or it is the sculpture itself.
DESCRIPTION, ANALYSIS, REACTION
Mahonri M. Young
Right to the Jaw, 1926
Bronze
35.6 x 49.1 x 24.1 cm
Brigham Young University Museum of Art
Another magnificent piece of art was made by Mahonri Young. The geometry of the sculpture is rather consolidated because it uses human figures to convey its message. It is quite difficult to display an overwhelming geometrical clarity or symmetry when using human figures. The colour is highly saturated. It stresses on the boldness of colour that corresponds to the nature of the sports being depicted. Not much contrast in colour is shown on the sculpture. It is small in scale. It has a very smooth texture and is even all throughout. Perhaps, it is because of the material being used.
There is a subtle connection between the colour and the description of the sculpture. It portrays a bloody sport, which is, boxing. Its use of a duskier shade somehow unveils the concealed meaning of the artwork. Moreover, the definite muscular physique suggests not just a simple association with the bloody sport, but also, it implies a novice in skill.
The whole concept of the sculpture was already clear to me the first time I saw it. The sculpture depicts a sport that has long been banned until recently. I think the sculpture has a very good motive of conveying the message that it tries to put across. Its unique combination of tone, colour, geometry, and other elements passes a strong significance of the history of the sport. Read More
Share:
Tags
Cite this document
(“ART Essay Example | Topics and Well Written Essays - 500 words - 17”, n.d.)
ART Essay Example | Topics and Well Written Essays - 500 words - 17. Retrieved from https://studentshare.org/miscellaneous/1608859-art

CHECK THESE SAMPLES OF ART

...?Art: Images of the gods and political or cultural messages: In considering the two ancient great cultures of the world, Greek and Byzantine, one caneasily understand that the religious imageries of the two cultures presented gods representing their own milieu. Both Byzantine and Greek gods were deeply involved with people. In the book of Iliad the gods can be seen involved with people’s war. Both of these cultures are filled with abundance of gods for each and everything. In both of these cultures, gods represented their war like attitudes. In representing gods too, this war like nature of the gods is clearly stressed. Later in Byzantium the religion was turned to be Christian and so the portrayal of Christ can be seen more... Images of the...
2 Pages(500 words)Essay

...?Artist Dario Robleto, Obsequies in Albany Order No. 511883 Facts - Dario Robleto was born in San Antonio in 1972 and in 1997 he received his BFA (Bachelor of Fine Arts) degree from the University of Texas-San Antonio. He not only made use of his artistic skills to design the ‘Obsequies in Albany’ but he also made a study of the Victorian mourning traditions and wove hair into the flowers that adorned the art piece. What makes this piece of art more important is that every detail has been backed by historical facts. E.g. the fabric and lace was from a mourning dress and the hair flowers were braided by a widow from the Civil War. 2: Describe  Dario Robleto’s ‘Obsequies in Albany’ is a...
2 Pages(500 words)Essay

...?Street Art is Art The art which gets developed within the public sphere is referred to as street art. This is essentially the unsanctioned art whichis in direct contrast to the government sponsored measures and initiatives. It is a fact that it could include graffiti artwork, sticker art, street posters, wheat-pasting, guerilla art, street installations and flash mobbing to name a few. The street art is not entirely an act of vandalism because it is different from the traditional graffiti because the latter relies strongly on the premise of hurting the cause of the society while street art aims to inculcate a sense of belief and hope within the people at large that all is not lost and there is still some ray of light left within... their...
1 Pages(250 words)Research Paper

...? Drawing is a time of art that produces two-dimensional pictures using instruments such as pen and ink, graphite pencils, crayons, and charcoal. Drawing is mainly done on paper. Examples of famous drawers include Leonardo da Vinci and his drawings such as Study of Arms and Hands (1474) and the Grotesque Profile (1487-1490). Printmaking is the art process of produces prints using three categories: relief where includes wood engraving and metalcut, intalgio which includes lithography and monotyping, and stencil which includes screenprinting and pochoir. In a contemporary context famous ways of printmaking include digital printing. Unlike drawing, there are multiple forms of mediums that include paper, wood...
2 Pages(500 words)Essay

...Art 0 Introduction Art through the eyes of an artist represents the different moods, features, and aesthetics of the living world. The same cannot be said of the spectator, who like many before and after him, see art as a piece of sexuality and provocation. One sees that most photographic representations are far from conveying the photographers’ intentional aim, in contrast to what spectators interpret them as. This is a pressing issue, because one tends to worry attending to the various conclusions reached about photographic representations. Art, in all forms, appear to generate a skeptical argument about the aesthetic significance of its diverse representation. It is...
4 Pages(1000 words)Essay

... Site: Number: November 09, Robert Carston Arneson Breathless (Self-Portrait in Blue), 1976 earthenware, low fire 37in x 21.5 in, d, 22 in. Utah Museum of Fine Arts Description This small earthenware sculpture is in the form of an adult male head and neck. It is somewhat larger than life size, and sits on a terracotta colored base into which the word “BREATHLESS” is inscribed. The head itself has a blue glaze but the natural reddish brown color of the clay is visible underneath the glaze in places. The hair and beard are worked realistically in the clay, and there are visible vertical lines on the neck which represent veins straining under pressure. The eyes are protruding and the pupils are emphasized by circular indentations... Site:...
2 Pages(500 words)Essay

...Section/# Dancers: An Artistic Analysis Although modern art has taken many forms, one of the mainstays of which itis represented is the way in which it seeks to capture core emotions within as few lines or intricacies as possible. Such a level of minimalism is represented in the statue by Jonathan Borofsky entitled “Dancers”. This particular piece of artwork stands between the theaters of the Denver Performing Arts Complex. As a means of seeking to define and illustrate what this particular sculpture represents to this author, this brief analysis will seek to focus a level of inquiry based upon the key emotions, and illustrations that are believed to be exemplified. It should of course be understood...
2 Pages(500 words)Essay

...Denver Art The dancing sculpture of Denver an art piece which is famous is a symbol of music celebration and dance. Denver is a of music and dance lovers and this striking piece of art is a remembrance to the public about the significance of art in people’s life. This sculpture with its slender body and dynamic structural beauty has the capability to take anybody into dancing mood and this 50 foot gleaming structure can take away anybody’s heart. The sculpture has five speakers mounted around it, which gives a unique ambience to the sculpture. The sculpture is the center of attraction of the city and brings in lot of people to enjoy it. This sculpture of Denver is created...
2 Pages(500 words)Essay

... Number] James Bama’s “Young Plains Indian” is exhibited in the Denver Art Museum. This oil painting is painted in 1980 and its basic texture is masonite. Thus, the aim of the artist was to preserve a realistic black and white photographic moment of a Native Indian youth in its most natural, pragmatic and tinted form. The young native Indian warrior in the painting was actually present in a Montana’s Crow Fair, but Bama aimed to preserve this moment as a true heritage of Native Indian American Society (“Bama”). (Courtesy of Denver Art Museum, James Bama) This painting is in vivid colours and portrays a traditional Native Indian Warrior, riding on a horse, with a traditional cloth saddle. Hence, his warrior accessories entail a bow... seems...
2 Pages(500 words)Essay

...﻿ Background The history of body art can be traced back to ancient civilizations. It was used as sign or symbol of beauty, good luck, prowess and ethnic identity. The practice of artistic representations of images has trickled down to the modern days. The body art has evolved itself from a tribal identity to a more cosmopolitan identity. Now what exactly made body art come into existence is not answered by history. It was definitely a need-based art as is evident from people camouflaging themselves with dirt and colors. Moreover it was also the prescribed norm of the society to have the “body shaped and marked in a prescribed manner” (Sanders, 1989, p. 2); otherwise it...
25 Pages(6250 words)Assignment
sponsored ads
Save Your Time for More Important Things
Let us write or edit the essay on your topic "ART" with a personal 20% discount.
GRAB THE BEST PAPER

Let us find you another Essay on topic ART for FREE!