Comments (0)
Add to wishlistDelete from wishlist
Cite this document
Summary
Carbon is assimilated into the plants tissues in the form of carbohydrates with the concomitant release of oxygen according to the following equation:
The oxygen released is dissolved in water to…
Download full paperFile format: .doc, available for editing
HIDE THIS PAPERGRAB THE BEST PAPER95.8% of users find it useful 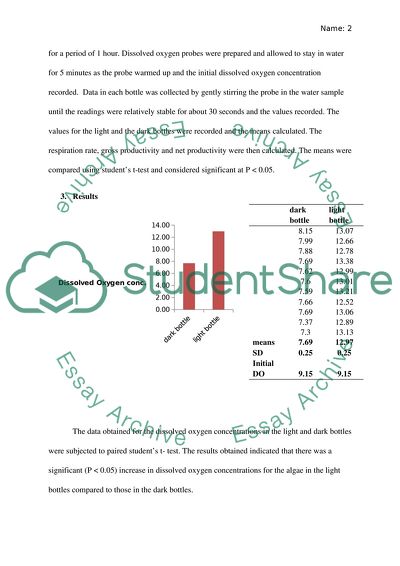 Lab report 13 November Primary productivity Introduction Primary productivity is the measure of the rate of carbon assimilation by plants. Carbon is assimilated into the plants tissues in the form of carbohydrates with the concomitant release of oxygen according to the following equation:
6 H2O(l) + 6 CO2 (g)+ energy → C6H12O6+ 6O2(g)
The oxygen released is dissolved in water to form molecular oxygen which can then be utilized by aquatic organisms. The respiration done by plants and animals reduces the concentrations of oxygen while photosynthesis increases the oxygen concentrations. Therefore the primary productivity of an ecosystem can be measured over time by calculating the amount of oxygen produced which is directly proportional the amount of carbon bound to organic compounds such as carbohydrates in photosynthesis. In this experiment the light and dark bottle method was used.
2. Materials and Methods
A set of 24 clean bottles each with a capacity 300ml were prepared. Twelve of the bottles were covered with aluminum foil and a black tape while the other twelve were not covered. All the 24 bottles were then filled with algae water. All the bottles were then exposed to light for a period of 1 hour. Dissolved oxygen probes were prepared and allowed to stay in water for 5 minutes as the probe warmed up and the initial dissolved oxygen concentration recorded. Data in each bottle was collected by gently stirring the probe in the water sample until the readings were relatively stable for about 30 seconds and the values recorded. The values for the light and the dark bottles were recorded and the means calculated. The respiration rate, gross productivity and net productivity were then calculated. The means were compared using student’s t-test and considered significant at P < 0.05.
3. Results

The data obtained for the dissolved oxygen concentrations in the light and dark bottles were subjected to paired student’s t- test. The results obtained indicated that there was a significant (P < 0.05) increase in dissolved oxygen concentrations for the algae in the light bottles compared to those in the dark bottles.
Discussion
The algae in the bottles exposed to light predominantly carry out photosynthesis as they trap light energy which is converted into chemical energy in the form of sugars. Photosynthesis leads to the production of O2 and thus explains the increased concentrations of the dissolved oxygen. In the dark bottle only respiration occurs since algae are C3 plants. Since there was no sunlight the plants did not manufacture more sugars but rather there was breakdown of the sugars to provide energy for cellular activities with the production of carbon dioxide and water according to the equation below. The dissolved oxygen in the water was thus used up and led to decreased oxygen concentrations.
C6H12O6+ 6O2 ⇒6CO2+ 6H2O + ATP
The rate of respiration was calculated as follows:
= (9.15-7.69)/1
=1.46
Gross primary productivity (GPP) is the rate at which the primary producers, in this case the algae, in a particular community turn solar energy into stored chemical energy via the process of photosynthesis and thus measures the rate of energy accumulation. This occurred mainly in the algae contained in the light bottle. This was calculated as follows:
= (12.97-7.69)/1
= 5.29
The net primary productivity (NPP) which is the rate at which energy is incorporated into the primary producers’ bodies through growth and reproduction was also calculated. Not all the GPP is incorporated in to the primary producers since they utilize some of the energy for respiration and other metabolic activities (Solomon, Berg and Martin 1169) The NPP was thus calculated as follows:
=(12.97-9.15)/1
=3.82.
In conclusion, the dark bottle was used to measure the rate of respiration in algae while the light bottle was used to measure the rate of photosynthesis. The difference in respiration and photosynthesis gave the NPP. As it can be seen from the results the NPP is greater than that of respiration and thus allows for the increase in size among the plants as they store the extra energy in form of carbohydrates.
Work cited
Eldara, P. Solomon, Linda R. Berg and Diana W. Martin. Biology. United States 8th ed Thomson Brooks/cole 2008. Print. Read More
Share:
Tags
Cite this document
(“Primary productivity Lab Report Example | Topics and Well Written Essays - 500 words”, n.d.)
Primary productivity Lab Report Example | Topics and Well Written Essays - 500 words. Retrieved from https://studentshare.org/miscellaneous/1608323-primary-productivity

CHECK THESE SAMPLES OF Primary productivity

...? Productivity Environmental Preference Survey Virginia Yesibel Moreau July 15, Productivity Environmental Preference Survey The productivity of an individual or groups is contingent upon establishing an understanding of the personality types, learning styles, and how it effects their requirements for instructional detail. Individual characteristics and environmental work conditions are endogenously linked to productivity and learning efficacy (Lee & Bozeman, 2005). Determining the learning styles of students and workers enables educators and supervisory staff to be better equipped at communicating with their pupils and subordinates and empowers the learners to assimilate...
1 Pages(250 words)Essay

...?Insert of Introduction Nursing is one of the noblest professions which require a lot of patience to execute the noble duties that one has been called upon to carry out. Like any other profession that deals with the saving of human life, nursing requires that the practitioner gives utter devotion to his or her work since human life is considered very important above all things and should be dealt with in a very careful manner. Reid and Marlon note that most of the clinical operations are literally run by the nurses, the doctors only come in on rare occasions to give instructions based on their areas of specialization and so, nurses play a very significant role in the way a clinic anywhere operates (Reid and Marlon, 2003... of Introduction...
3 Pages(750 words)Research Paper

...Productivity and Cost Labor Productivity is an important factor in an industry’s strategic decision of their cost of production. Productivity is out put of a labor per hour. In a manufacturing industry, the wage and unit cost fixation is a significant strategic decision. Higher labor productivity will help firms to reduce average cost and improve competency with other firms in market by providing quality products at reasonable price and thus they will become able to achieve increased profitability. Bulk production strategy relies heavily on labor productivity. Wage relates with...
4 Pages(1000 words)Essay

...Labor productivity Labor productivity can be defined as the amount of output by an individual laborer within a specified duration of time. Labor productivity is to a large extent influenced by the availability of human and physical resources. At the individual level, labor productivity is influenced by a number of factors that will be discussed in this paper. Motivation among workers is the first factor, which serves to ensure that there is a continued commitment to the tasks assigned to them (Srivastava, 2007). Even in the case of challenging tasks, motivated laborers, regardless of their line of duty, will be committed and will complete the work. Having a team spirit...
1 Pages(250 words)Essay

...Factors Affecting Group Productivity at Johnson & Johnson Factors Affecting Group Productivity at Johnson & Johnson The complex challenges that globalization and competitive environment pose to an organization cannot be tackled by a single individual, but demand the capabilities of a group or a team. Group results from an interaction of two or more people who try to influence each other (Griffin & Moorehead, 2008). Being a part of Johnson & Johnson has given me a chance to closely investigate the group productivity and thereby identify the underlying influences. First of all, the company’s ‘Credo’ contributes to the productivity of groups (Johnson & Johnson, 2012). It links the management’s philosophy to the employees. Prominence... such as...
1 Pages(250 words)Essay

...Module 26 September Productivity 13 Charles Lackey operates a bakery in Idaho Falls. Because of its excellent product and location,demand has increased by 25% in the last year. On far too many occasions, customers were have not been able to purchase the bread of their choice. Because of the size of the store, no new ovens can be added. At a staff meeting, one employee suggested ways to load the ovens differently so that more loaves of bread can be baked at one time. This new process will require that the ovens be loaded by hand, requiring additional manpower. This is the only thing to be changed. If the bakery makes 1,500 loaves per month with a labor productivity of 2.344 loaves per...
1 Pages(250 words)Assignment

...Productivity Management Affiliation Productivity management Davis Allen gives a summation of his educative book Making it all work: Winning at the game of Work and the Business of Life. In the video, he describes how time management and productivity comes hand in hand in any organization. He explains how one can get things done with much ease when one incorporates several principles. He simply builds up simple elements into a whole set of admirable learning objectives useful for managers. He clearly draws a model of purposes, principles, vision, mission, goals, responsibility areas, projects, actions. He further expounds how they do affect the performance in a firm. He illustrates the...
1 Pages(250 words)Essay

...Policy and Decision Making in Public Sector The size of the government has an impact on how people can trust or fail to trust the government. Larger governments are able to meet their obligation to the people and this gives confidence to the people. The people can trust that they will count on the government to provide such services as protect them from external aggression, provide health services, provide public education etc. However, this does not happen exponentially. As the government becomes bigger and is able to meet so many of people’s needs, its power over the individual citizens increases and this means that the government can control the citizens in a much easier way thus affecting the liberty of the individual... and Decision...
2 Pages(500 words)Essay

...Measuring Productivity in hospital Laboratory Number Measuring Productivity in hospital Laboratory This productivity measurement will be based on a hospital laboratory. It will focus on the Microbiology department. The main activities undertaken by the department involve screening of body tissues or fluids for infectious microbes. The primary inputs in this unit include: preparing specimen for centrifuging; tagging tubes, preparing cell samples, adding chemical reagents and samples of specimen to test tubes and centrifuging (Ozcan, 2012). Key outputs include: displaying the results on screen or in print form, interpreting them and compiling the reports. As Lippi, Mattiuzzi and Plebani (2015) said, some of the factors that should... be...
1 Pages(250 words)Research Paper
sponsored ads
Save Your Time for More Important Things
Let us write or edit the lab report on your topic "Primary productivity" with a personal 20% discount.
GRAB THE BEST PAPER

Let us find you another Lab Report on topic Primary productivity for FREE!