Comments (0)
Add to wishlistDelete from wishlist
Cite this document
Summary
Initially, there may be no signs of this disorder until the end-phase the disease is attained. This phase is where the kidney is unable to excrete unwanted materials from the…
Download full paperFile format: .doc, available for editing
HIDE THIS PAPERGRAB THE BEST PAPER92.5% of users find it useful 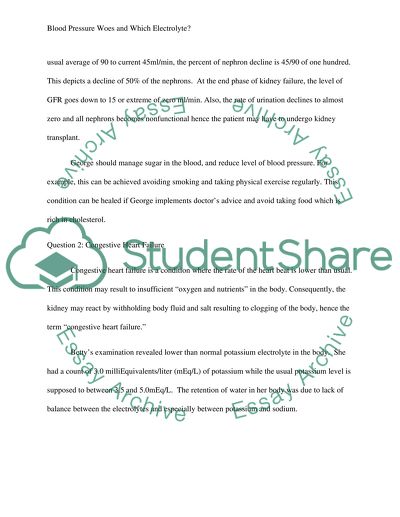 Extract of sample "Blood Pressure Woes and Which Electrolyte"

Blood Pressure Woes and Which Electrolyte? Chronic Renal/Kidney Failure Chronic Kidney failure is a disorder of the kidney which results from gradual malfunction of the kidney. Initially, there may be no signs of this disorder until the end-phase the disease is attained. This phase is where the kidney is unable to excrete unwanted materials from the body hence making waste to be withheld in the body. The major cause of this disorder is high blood pressure and diabetes.
George has been having high blood pressure for five years, has been letting out a lot of urine and tremendous reduction of body mass. Acute kidney failure occurs within a short time and results to loss of urine. Therefore, George tested positive for chronic renal failure. The red blood cells are abnormally low.
Normal red blood cells (RBC) in men should be between 4.7 and 6.1 million cells/mcl. This sample had a low count of 3.8million cells/mcl which is below ordinary level. There is probability that some red blood cells have been discharged with the urine. Also, regular hemoglobin count in male is between13.8 to 17.2 gm/dL. The count of 11.0 gm/dl is lower than normal and could be as a result of excessive loss of water due to frequent urination.
The usual Glomerular Filtration Rate (GFR) in a human body is around 90ml/min but in George’s case it was 45ml/min which is low. Protein which is supposed to be 80mg/dl per day is abnormally high (3g/24hr), which is a characteristic of high blood pressure.
The operational nephrons in the body determine the level of filtration that takes place in the kidney hence influencing the level of GFR. Considering the level of GFR has dropped from a usual average of 90 to current 45ml/min, the percent of nephron decline is 45/90 of one hundred. This depicts a decline of 50% of the nephrons. At the end phase of kidney failure, the level of GFR goes down to 15 or extreme of zero ml/min. Also, the rate of urination declines to almost zero and all nephrons becomes nonfunctional hence the patient may have to undergo kidney transplant.
George should manage sugar in the blood, and reduce level of blood pressure. For example, this can be achieved avoiding smoking and taking physical exercise regularly. This condition can be healed if George implements doctor’s advice and avoid taking food which is rich in cholesterol.
Question 2: Congestive Heart Failure
Congestive heart failure is a condition where the rate of the heart beat is lower than usual. This condition may result to insufficient “oxygen and nutrients” in the body. Consequently, the kidney may react by withholding body fluid and salt resulting to clogging of the body, hence the term “congestive heart failure.”
Betty’s examination revealed lower than normal potassium electrolyte in the body. She had a count of 3.0 milliEquivalents/liter (mEq/L) of potassium while the usual potassium level is supposed to between 3.5 and 5.0mEq/L. The retention of water in her body was due to lack of balance between the electrolytes and especially between potassium and sodium.
She can increase the uptake of foods rich in potassium and low cholesterol. These may include raisins, mushrooms, and soya beans and so on. These will increase potassium without increasing cholesterol which would otherwise result to high blood pressure.
The doctor may recommend her to use potassium supplement so that she can raise her potassium level. However, talking excess of this drug could result to other health complications like vomiting, stomach disorder and diarrhea.
Furosemide drug is recommended because it removes surplus fluid withheld in the body as well as lowering high blood pressure. This drug could facilitate kidney to convert surplus fluid into urine which is then discharged from the body. This would also help her ease pain in the body.
Electrolytes produce electrical signals which activate the heart hence making the whole body to operate normally. When they are at balance, the entire body cells performs their functions ordinarily hence maintaining body in a health state.
Reference
A.D.A.M. Medical Encyclopedia, (2011). Chronic kidney disease. U.S. National Library of Medicine
accessed on 9th November 2012 Read More
Share:
Tags
Cite this document
(“Blood Pressure Woes and Which Electrolyte Essay Example | Topics and Well Written Essays - 500 words”, n.d.)
Blood Pressure Woes and Which Electrolyte Essay Example | Topics and Well Written Essays - 500 words. Retrieved from https://studentshare.org/miscellaneous/1607949-blood-pressure-woes-and-which-electrolyte

CHECK THESE SAMPLES OF Blood Pressure Woes and Which Electrolyte

...?Blood pressure is a measure of tension exerted by blood against the walls of the arteries. It de s the force of ventricular contraction, the resistance within the arterioles and the capillaries and the volume and viscosity of blood. Accurate measurement of blood pressure in the presence of findings in the history and physical examination of a patient can bring to light a diagnosis that may pertain to any of the above factors. This is why measurement of blood pressure is an integral part of general as well as cardiovascular examination. There are several processes that control the blood...
2 Pages(500 words)Essay

...?Running head: HIGH BLOOD PRESSURE HIGH BLOOD PRESSURE (school) High Blood Pressure Introduction High blood pressure is one of the mostsignificant health issues plaguing most individuals past the age of 40. Although it has been known to affect younger adults as well, it is a medical problem which mostly affects older adults. This disease is also considered a symptom for heart diseases, including coronary heart disease and congestive heart failure. It also has various causes, including obesity, smoking, and stress. This paper shall discuss the different details involving this medical condition. First, it...
7 Pages(1750 words)Term Paper

...? High Blood Pressure Measurement Introduction Blood pressure measurement is among the most important and commonly performed office tests; however, man people tend to undervalue the importance of the test. As a matter of fact, the according to Geddes and Newberg (1992) nearly 45% of adults tend to have high blood pressure without their knowledge. I opted to conduct this experiment in order to ascertain how blood pressure level tends to fluctuate under various body conditions. Moreover, unlike other experiments that require complex procedures and equipments that can only be conducted on animals or by...
4 Pages(1000 words)Essay

...Human Anatomy and Physiology Calculations Define diastolic blood pressure. "Diastolic" came from the Greek diastole meaning "a drawing apart."The term has been in use since the 16th century to denote the period of relaxation of the heart muscle. The diastolic pressure is specifically the minimum arterial pressure during relaxation and dilatation of the ventricles of the heart when the ventricles fill with blood. In a blood pressure reading, the diastolic pressure is typically the second number recorded. For example, with a blood pressure of 120/80 ("120 over 80"), the...
4 Pages(1000 words)Assignment

... Article Relationship between weight loss and blood pressure In a report that was issue by the world health organization, 2002. It was found that there is a growing prevalent of those with chronic diseases occasioned by obesity. In was also contained in the report that a close correlation do exist between the being obese and developing high blood pressure (Krueger, 2012). Unfortunately, there is no known cure for high blood pressure thought it can be prevented or controlled. It is therefore construable that with diminishing body weight, one significantly reduces the possibility of developing high blood pressure. The relationship of body weight and blood pressure are directly proportional. This statement should though be taken... in the...
1 Pages(250 words)Assignment

...Insert Introduction During the laboratory activity, systolic blood pressure (the maximum pressure exerted by the blood against the artery walls) of the test subject was 110 at rest. However, this pressure increased to 120 and 140 when subject was placed under 1kg and 2.5 kg workloads respectively. This was the case as blood flow has to increase during strenuous activity (exercise) in order to supply nourishment (oxygen and nutrients) to critical organs such as the heart, brain, lungs and muscles. At the same time, diastolic pressure (the lowest pressure in the artery) at rest was measured at 70 but...
1 Pages(250 words)Essay

...cardiac output and hence reduces blood pressure initially. This is also called orthostatic hypotension (reduced blood supply to brain due to reduced cardiac output causing fainting). However after sometimes, baroreceptor respond to this decreased blood volume and stimulates the cardio-accelerator center in Rostral Ventrolateral Medulla which cause noradrenergic discharge. Nor adrenaline then acts on Beta-2 adrenergic receptors on myocardium to increase the heart rate and force of contraction to increase the blood pressure to normal and thus maintaining homeostasis (Williams et al, 2004). Q2. Analyzing the blood...
6 Pages(1500 words)Lab Report

1 Pages(250 words)Essay
sponsored ads
Save Your Time for More Important Things
Let us write or edit the essay on your topic "Blood Pressure Woes and Which Electrolyte" with a personal 20% discount.
GRAB THE BEST PAPER

Let us find you another Essay on topic Blood Pressure Woes and Which Electrolyte for FREE!