Obama care or romney care.which care would you prefer and why (I prefer obama care) - Research Paper Example

Comments (0)
Add to wishlistDelete from wishlist
Cite this document
Summary
The present Healthcare system leaves many American citizens uninsured. In 2011, there are 48.6 million Americans that are left uninsured or without health insurance (U.S. Census Bureau,…
Download full paperFile format: .doc, available for editing
HIDE THIS PAPERGRAB THE BEST PAPER93.3% of users find it useful 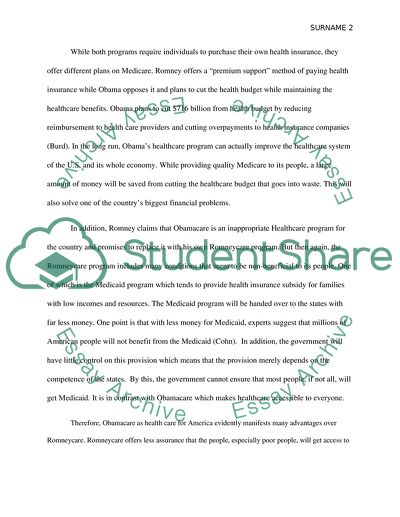 Extract of sample "Obama care or romney care.which care would you prefer and why (I prefer obama care)"

Obamacare over Romneycare Today, one of the biggest problems in the United s of America isits Healthcare program. The present Healthcare system leaves many American citizens uninsured. In 2011, there are 48.6 million Americans that are left uninsured or without health insurance (U.S. Census Bureau, 2012). That constitutes nearly 16% of its total population. Many argue that Healthcare is part of their rights and that the government should provide a comprehensive program that ensures that everyone is given an affordable health insurance.
Consequently, the healthcare programs of the two presidential candidates are the ones being spotlighted and scrutinized. U.S. President Barack Obama offers the Obamacare as the health care for America while former Massachusetts Governor Romney offers the “Romneycare” healthcare program. It is very important that the healthcare program of the winning president favors the people. That it solves the long time problem of the state and benefits all the Americans.
Many claim that Obamacare and Romneycare offer no difference. Though the two healthcare programs exhibit many similarities in their plan, they still hold key distinctions. These distinctions tend to show that Obamacare seems a lot more favorable to the American people. Healthcare programs concentrate on three main areas namely employer-provided insurance, Medicare for seniors and Medicaid for the poor.
While both programs require individuals to purchase their own health insurance, they offer different plans on Medicare. Romney offers a “premium support” method of paying health insurance while Obama opposes it and plans to cut the health budget while maintaining the healthcare benefits. Obama plans to cut $716 billion from health budget by reducing reimbursement to health care providers and cutting overpayments to health insurance companies (Burd). In the long run, Obama’s healthcare program can actually improve the healthcare system of the U.S. and its whole economy. While providing quality Medicare to its people, a large amount of money will be saved from cutting the healthcare budget that goes into waste. This will also solve one of the country’s biggest financial problems.
In addition, Romney claims that Obamacare is an inappropriate Healthcare program for the country and promises to replace it with his own Romneycare program. But then again, the Romneycare program includes many conditions that seem to be non-beneficial to its people. One of which is the Medicaid program which tends to provide health insurance subsidy for families with low incomes and resources. The Medicaid program will be handed over to the states with far less money. One point is that with less money for Medicaid, experts suggest that millions of American people will not benefit from the Medicaid (Cohn). In addition, the government will have little control on this provision which means that the provision merely depends on the competence of the states. By this, the government cannot ensure that most people, if not all, will get Medicaid. It is in contrast with Obamacare which makes healthcare accessible to everyone.
Therefore, Obamacare as health care for America evidently manifests many advantages over Romneycare. Romneycare offers less assurance that the people, especially poor people, will get access to healthcare which defeats the purpose of reform. Obamacare provides a healthcare program that is accessible to all Americans.
Works Cited
Burd, Brad. “Obamacare Versus Romneycare: How Similar Are They?”. Huff Politics Website. 10 October 2012. Web. 11 November 2012.
Cohn, Jonathan. “On Health Care, Romney Is the Radical”. The New Republic Website.
1 November 2012. Web. 11 November 2012.
“Highlights: 2011”. United States Census Bureau Website. 12 September 2012. Web. 11 November 2012.
U.S. Department of Health & Human Services. “Key Features of the Affordable Care Act, By Year”. Healthcare.gov. 11 November 2012. Web. 11 November 2012. Read More
Share:
Tags
Cite this document
(“Obama care or romney care.which care would you prefer and why (I Research Paper”, n.d.)
Obama care or romney care.which care would you prefer and why (I Research Paper. Retrieved from https://studentshare.org/miscellaneous/1607942-obama-care-or-romney-carewhich-care-would-you-prefer-and-why-i-prefer-obama-care

“Obama Care or Romney care.Which Care Would You Prefer and Why (I Research Paper”, n.d. https://studentshare.org/miscellaneous/1607942-obama-care-or-romney-carewhich-care-would-you-prefer-and-why-i-prefer-obama-care.
Comments (0)
Click to create a comment or rate a document

CHECK THESE SAMPLES OF Obama care or romney care.which care would you prefer and why (I prefer obama care)

...Obama Care Universal health care in the United s has been an issue that has had many organizations debate over what is required in the developed nation. Their counterpart to the north, Canada, offers its citizens universal health care and this has many groups up in arms over why the United States is not. Obama’s bill tries to do many things in its attempt to aid in providing universal health care to its citizens. However, this bill has many lobby groups debating over whether it is appropriate to have such a bill in the nation. One thing that is noticeable about this bill is the government mandate that requires every...
4 Pages(1000 words)Essay

...?Running Head: health sciences and medicines Obama Healthcare Reform of the of the of the INTRODUCTION Barrack Hussein Obama also known as Barack Obama is the 44th and present president of united sates of America. During the period of recession, he took few steps to stimulate the economy of the country. Some domestic initiatives takes during his reign were in the form of the Patient Protection and Affordable Care Act. This act is also known as the “Obamacare”. On July 14, 2009 the house of democrats presented a plan regarding the health care system. Obama wanted congress to approve it by the end of 2009. On November 7, 2009 a bill was...
6 Pages(1500 words)Essay

...and procedures pertaining to patient coverage as they would now be forced to cover pre-existing conditions for patients who required medical treatment. Obamacare was supposed to be the defender of the patient's rights. Siding with the patient on every issue pertaining to the use of health insurance while the insurance companies would be compelled by the federal government to do their jobs properly every time from the moment the bill was passed. While President Obama held lofty goals and ambitions for his rock-star health care act and defended it like Bret Bielema trying to get his quarterback to score a touchdown, he failed to review the actual and minuscule content of...
4 Pages(1000 words)Essay

...Health Care Reform (OBAMA) The of health care reforms in the United s (US) has had a long history of being proposed by numerous political administrations every time they are campaigning for votes to enter into office. The difference this time round is that this promise was made, and the politicians who entered into office made good of their promise to reform the health care system in the US. The Obama administration possessed the political goodwill and ambition to drive the health care reform agenda in the houses of representatives, and through a lot of political lobbying; they were able to pass two critical bills. These two bills were...
3 Pages(750 words)Essay

...Constitutionality of the Obama Healthcare Bill The Obama healthcare bill, also known as the patient protection and affordable care act, was promulgated by the United States President Barrack Obama into law on the 23 of March in 2010. It involved reformation of various aspects of both private and public health insurance schemes. The United States senate passed it on December the 24th of 2009, with Congress passing it four months later. However, many States, individuals and organizations have gone to federal court challenging its constitutionality. Two federal appellate courts have upheld it; a third has declared it unconstitutional and with a fourth court ruling that it...
2 Pages(500 words)Essay

...influence young adults but it affects also harms American businesses and society. Businesses are not making enough money due to bad economic conditions. Obama Care Act forces businesses to buy insurance for their employs if they have 50 or more employees. This can lead to increase in unemployment rate and harm the speed and the quality of business production since companies may try to avoid purchasing healthcare insurance by hiring less than 50 individuals and organizations may even reduce the number of hours their employees are allowed to work. A good example would be the Trader Joes Company which reduced employees’ work hours by making them part time workers instead of permanent. In...
5 Pages(1250 words)Essay

...to 50 individuals. Due to the Obama Care Act, all these small business will be required to purchase insurance coverage for their employees and due to this their operational costs will increase and their profits will decline. In order to counter this issue and increase profits, these small businesses will decrease their number of workforce to maintain a workforce of less than 50. They will even hire more part time employees who are paid less than the full time employees. In turn, those who were supposed to benefit from this Act will end up suffering consequences such as low paid employment and even unemployment. Due to this I, being a student in the field hospitality and tourism will even...
5 Pages(1250 words)Essay
sponsored ads
Save Your Time for More Important Things
Let us write or edit the research paper on your topic "Obama care or romney care.which care would you prefer and why (I prefer obama care)" with a personal 20% discount.
GRAB THE BEST PAPER

Let us find you another Research Paper on topic Obama care or romney care.which care would you prefer and why (I prefer obama care) for FREE!