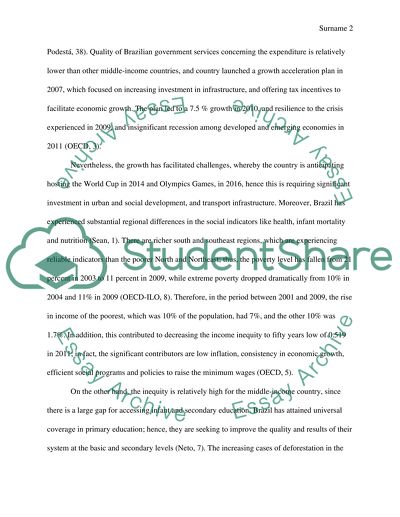 Other Brazils Emerging Economy Emerging Market Economy is attributed to fast economic growth, and increased foreign investment, which is indicated by substantial economic data depicting the fast growth due to rising Gross Domestic Product per capita, foreign reserves and trade volumes. Therefore, the faster growth refers to the higher profits from foreign investment, which encourages the foreign investment, thus promoting economic growth (Sean, 1). In 2011, Brazil was identified to be the seventh wealthiest economy with a GDP of 2.2 trillion dollars, since it is the largest country with a population of Latin Americans and Caribbean. The country weathered the global financial recession, which had insignificant effects on Brazil economy; hence, it was one of the last to fall in to recession during 2008 and among the first to resume the growth in 2009. Brazil’s Gross Domestic Product has grown from 7.5% in 2010 to 2.7% 2011, and despite to the global hold back, the domestic market in Brazil have become strong, hence reducing vulnerability to the external crisis (The World Bank Group, 1). Therefore, the citizens of Brazil are benefiting from the stability of their economic growth, with relatively low inflation rate and improved social well-being.
There are limits of potential growth and significant advances in the economy, which are attributed to institutional reforms, noninflationary growth that is derailed by barriers, regulation and insufficiency in infrastructure and poor business climate (Jimenez, Gómez Sabaini and Podestá, 38). Quality of Brazilian government services concerning the expenditure is relatively lower than other middle-income countries, and country launched a growth acceleration plan in 2007, which focused on increasing investment in infrastructure, and offering tax incentives to facilitate economic growth. The plan led to a 7.5 % growth in 2010, and resilience to the crisis experienced in 2009, and insignificant recession among developed and emerging economies in 2011 (OECD, 3).
Nevertheless, the growth has facilitated challenges, whereby the country is anticipating hosting the World Cup in 2014 and Olympics Games, in 2016, hence this is requiring significant investment in urban and social development, and transport infrastructure. Moreover, Brazil has experienced substantial regional differences in the social indicators like health, infant mortality and nutrition (Sean, 1). There are richer south and southeast regions, which are experiencing reliable indicators than the poorer North and Northeast; thus, the poverty level has fallen from 21 percent in 2003 to 11 percent in 2009, while extreme poverty dropped dramatically from 10% in 2004 and 11% in 2009 (OECD-ILO, 8). Therefore, in the period between 2001 and 2009, the rise in income of the poorest, which was 10% of the population, had 7%, and the other 10% was 1.7%. In addition, this contributed to decreasing the income inequity to fifty years low of 0.519 in 2011; in fact, the significant contributors are low inflation, consistency in economic growth, efficient social programs and policies to raise the minimum wages (OECD, 5).
On the other hand, the inequity is relatively high for the middle-income country, since there is a large gap for accessing infant and secondary education. Brazil has attained universal coverage in primary education; hence, they are seeking to improve the quality and results of their system at the basic and secondary levels (Neto, 7). The increasing cases of deforestation in the rain forests and other crucial biomes has led to challenges in combining the benefits derived from agricultural growth, environmental conservation and sustainability of development. In conclusion, the paper has explored Brazil emerging economy by discussing factors that are contributing to the growth of their economy. The quick growth in Brazil can be attributed to the prudent leadership of the president Henrique Cardoso and Luiz Inácio Lula da Silva, and this has contributed alleviation of poverty through increased international affairs.
Works Cited
The World Bank Group. Brazil Overview. Available online at: http://www.worldbank.org/en/country/brazil/overview [Accessed on October 29 2012]
Jiménez, Juan Pablo, Gómez Sabaini Juan Carlos, and Podestá Andrea, “Tax Gap and Equity in Latin America and the Caribbean,” Fiscal Studies, No. 16, published in Public Finance and Administrative Reform Studies, Eschborn: ECLAC and GTZ, 2010
OECD. Tackling Inequalities in Brazil, China, India and South Africa, The Role of Labor Market and Social Policies, Paris: OECD Publishing, 2010
OECD. OECD Economic Surveys: Brazil, Vol. 20089/14, Paris: OECD Publishing, 2009
Neto Silveira “Non-spatial Govern Policies and Regional Inequality in Brazil”, Annals of the 5th Meeting of the Brazilian Regional Association of Regional and Urban Studies: Recife, 2008
OECD-ILO. “Share of Formal Employment Continues to grow,” G20 Country Policy Briefs: Brazil, prepared for the G20 Meeting of Labor and Employment Ministers, Paris, 26-27. 2011
Sean Williams. "Why Is Brazil an Emerging Market Economy?" The University of Lowa Center for International Finance and Development. Available Online at: http://ebook.law.uiowa.edu/ebook/uicifd-ebook/why-brazil-emerging-market-economy [Accessed on October 29 2012] Read More
Share:
Tags
Cite this document
(“BRAZIL'S EMERGING ECONOMY Essay Example | Topics and Well Written Essays - 500 words”, n.d.)
BRAZIL'S EMERGING ECONOMY Essay Example | Topics and Well Written Essays - 500 words. Retrieved from https://studentshare.org/miscellaneous/1606817-brazils-emerging-economy

...is bauxite, which is the main ingredient of aluminum. Uranium, petroleum, diamonds, limestone, platinum, and hydro electricity power make up just a short list of the many resources found in the country. The great amount of resources throughout Brazil has “helped a lot in the enhancement of financial status of the country (Baer, 2001).” Because of the presence of these many resources, not only has Brazil been able to secure a healthy economy, but they have also found themselves to be less dependent on foreign imports, which is something that many other countries in the world are unable to make a claim to. Similarly, Brazil is a country that prides itself on what it is...
4 Pages(1000 words)Research Paper

...?Brazil Brazil is a country for all; it allures the travellers and the business seekers with equal intensity. Brazil is the largest South American country and fifth largest in the world in terms of both population and geographical area. Besides it is the eighth largest economy of the world. Considering its large size the country demonstrates interesting and beautiful natural diversity. In the east Brazil is surrounded by the Atlantic Ocean and has a number of beautiful beaches along its eastern coastline. The country encompasses a part of Amazon rain forest and displays striking natural beauty. Dazzling beaches, lush green forests and ever awake nightlife comes together to make Brazil a magical land. In the following part a brief... ....
4 Pages(1000 words)Essay

Brazil as an emerging market

...about the young and growing labor population of the emerging market is that the large size of the population has been seen by government as an asset rather than a liability, expanding the human capital of these people to take up the labor force. It is however negative if the trend of population growth will not decrease with time because the geographic size of the market never increases and the economy will be too pressurized to meet the population demand. It is also a negative phenomenon that greater part of the population is dense in one city because it defeats the notion of equity of human resource. Technological Advancement Technological advancement in Brazil has come through several...
4 Pages(1000 words)Assignment

...for its parent company in Australia or any other viable international destination rather than a new account in Brazil, from which the credit base of the company will be determined by local and financial authorities. Tax and regulatory policies that impede entrepreneurship The tax system in Brazil has been described as one that is yet to be embraced by the business community as entrepreneurship friendly. This is because there are very little tax reforms and tax policies that are directed at relieving enterprises of financial spending. Indeed some of these tax reforms exist in most developing and emerging markets but the one in Brazil is yet to see the shine that...
4 Pages(1000 words)Assignment

Economy of Brazil and Russia

...emerged as a stable economy owing from the Real Plan implemented since 1994 (Economy of Brazil 2006). In order to fully assess the economic performance of Brazil during the past three years, this paper will look at various economic indicators which include nominal GDP (Gross Domestic Product), GDP growth rate, per capita GDP, and inflation growth from 2003-2005. This paper will utilize the data provided by the International Monetary Fund (IMF). Figure 1. GDP (in billion Real) and GDP Growth (%) in Brazil (2003-2005) Figure 1 shows the GDP and GDP growth rate in Brazil from 2003-2005. During 2003, the country reports...
8 Pages(2000 words)Essay

.... Such large holdings of FDI, however, may be eroded by any negative performance of the American and European economies. If a prolonged recession occurs in the US and Europe, the FDI in Brazil and other emerging markets will collapse and trigger a worldwide crisis. To avoid this scenario, the emerging economies need to sustain their economic growth by strengthening domestic demand instead of relying on exports. This would stimulate imports and help balance international trade. Aware of this risk, Brazil has positioned its services sector as the largest recipient of FDI, such that 78.6 percent of foreign investment goes to...
9 Pages(2250 words)Research Paper

...ensured the setting up of sugarcane industry. The nation turned out to be agriculture based economy from where the Portuguese exported the agricultural commodities to European nations. With time the most crucial colonial product of Brazil was sugar and this remained equally important till the eighteenth century when there was a crisis as they faced competition from both Dutch and French sugar producers located close to Europe. This led to a fall in the price of sugar. Even gold production declined towards the close of the eighteenth century. The Portuguese administration still kept its integrity by sending bullions to the nation. The nation however has undergone wide scale changes overtime and currently...
10 Pages(2500 words)Essay

.... For example in 2004, it got up to US$ 61 billion followed by Korea and Brazil. The danger of imported capital is that it is later paid back to the exporter through profit remittance or project discontinuation. It, therefore, means that the country with capital inflow pays for the cost of capital. FDI creates more employment opportunities especially in the emerging economies like China with a high labor endowment, but fewer job opportunities. Through FDI, opportunities may also open for more jobs from local suppliers. The positive effect of FDI will also be increased the labor mobility. However, for more employment opportunities to be created it may warrant crowding out of local firms...
10 Pages(2500 words)Essay

...subsidized the equipment required for the renewable energy installations such as the solar panels and wind turbines in order to encourage further use of renewable energy. This has greatly contributed to Brazil being self-reliant in terms of meeting its energy needs, which has, in turn, placed the economy at a vantage point to be able to take advantage of arising opportunities (International Labour Office., & International Institute for Labour Studies, 2011). Brazil, as a country, is richly equipped in terms of mineral resources. It has large reserves of natural gas, which are used in running cars and other machines. Brazil has the highest natural gas deposit than other...
2 Pages(500 words)Essay
sponsored ads
Save Your Time for More Important Things
Let us write or edit the essay on your topic "BRAZIL'S EMERGING ECONOMY" with a personal 20% discount.
GRAB THE BEST PAPER

Let us find you another Essay on topic BRAZIL'S EMERGING ECONOMY for FREE!