Comments (0)
Add to wishlistDelete from wishlist
Cite this document
Summary
In June 1994, two persons named Helen Steel and Dave Morris were tried for a lawsuit filed by the McDonald’s Corporation in a case that is known as the “McLibel” Case (NICHOLSON). The McDonalds Corporation v Steel & Morris Case involved two social activists who belonged to…
Download full paperFile format: .doc, available for editing
HIDE THIS PAPERGRAB THE BEST PAPER96.5% of users find it useful 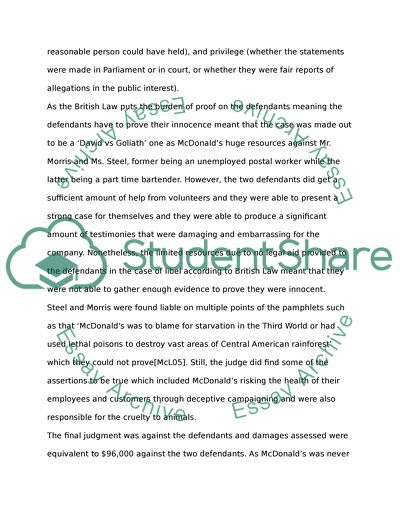 In June 1994, two persons d Helen Steel and Dave Morris were tried for a lawsuit filed by the McDonald’s Corporation in a case that is known as the “McLibel” Case (NICHOLSON). The McDonalds Corporation v Steel & Morris Case involved two social activists who belonged to the ‘London Greenpeace’ organization who started distributing pamphlets published in 1986 entitled ‘What’s wrong with McDonald’s’ (Vidal, 1996). The pamphlets contained several claims that were damning to the McDonald’s organization such as ‘McDonald’s was destroying rainforests, causing starvation in Third World countries, producing litter in cities, causing heart disease, cancer and food poisoning’ and several other assertions too. After threats by McDonald’s of libel, three of the five activists apologized but these two activists refused and subsequently McDonald’s filed a defamation case against them which resulted in a case that became the longest in English history (McLibel: Longest case in English history, 2005).
In June of 1997, in a long judgment, Justice Rodger Bell found both defendants guilty on multiple accounts of defamation against the McDonald’s Corporation.
In English Law, lawsuits for libel are allowed to be brought in the courts for any published statement that are supposed to defame a named or identifiable individual(individuals) in a manner which causes them loss in their trade or profession, or causes a reasonable person to think worse of him, her or them.
The defenses that are allowed for libel are justification (the truth of the statement), fair comment (whether the statement was a view that a reasonable person could have held), and privilege (whether the statements were made in Parliament or in court, or whether they were fair reports of allegations in the public interest).
As the British Law puts the burden of proof on the defendants meaning the defendants have to prove their innocence meant that the case was made out to be a ‘David vs Goliath’ one as McDonald’s huge resources against Mr. Morris and Ms. Steel, former being an unemployed postal worker while the latter being a part time bartender. However, the two defendants did get a sufficient amount of help from volunteers and they were able to present a strong case for themselves and they were able to produce a significant amount of testimonies that were damaging and embarrassing for the company. Nonetheless, the limited resources due to no legal aid provided to the defendants in the case of libel according to British Law meant that they were not able to gather enough evidence to prove they were innocent.
Steel and Morris were found liable on multiple points of the pamphlets such as that ‘McDonalds was to blame for starvation in the Third World or had used lethal poisons to destroy vast areas of Central American rainforest’ which they could not prove (McLibel: Longest case in English history, 2005). Still, the judge did find some of the assertions to be true which included McDonald’s risking the health of their employees and customers through deceptive campaigning and were also responsible for the cruelty to animals.
The final judgment was against the defendants and damages assessed were equivalent to $96,000 against the two defendants. As McDonald’s was never in it for the money, meant that the amount of $96,000 meant nothing to the company whose annual revenues were in billions of dollars worldwide. The winning of the case by McDonald’s was not considered a great victory for them as a bad perception had already been built up in the media against them due to the nature of the case with significant disparities among the two parties in terms of financial and other resources.
Bibliography
McLibel: Longest case in English history. (2005, February). Retrieved from BBC News: http://news.bbc.co.uk/2/hi/uk_news/4266741.stm
NICHOLSON, M. A. (n.d.). MCLIBEL: A CASE STUDY IN ENGLISH DEFAMATION LAW. Wisconsin International Law Journal, 1-7.
Vidal, J. (1996, March 9). You and I against McWorld. Retrieved from The Guardian: http://www.guardian.co.uk/uk/1996/mar/09/johnvidal Read More
Share:
Tags
Cite this document
(“Rule of Law Paper/Soc 205 Essay Example | Topics and Well Written Essays - 500 words”, n.d.)
Rule of Law Paper/Soc 205 Essay Example | Topics and Well Written Essays - 500 words. Retrieved from https://studentshare.org/miscellaneous/1604856-rule-of-law-papersoc-205

CHECK THESE SAMPLES OF Rule of Law Paper/Soc 205

...observe with all the rules and regulations in the act. EEOC stated that any individual who believes that his or her employment rights have been disobeyed may file a charge of discrimination with EEOC and an individual, organization, or agency may file a charge on behalf of another person in order to guard the aggrieved person's identity (Federal Laws Prohibiting Job Discrimination Questions and Answers, 2009). Under the EEOC-enforced laws, compensatory and punitive damages may be available if intentional discrimination is found (Federal Laws Prohibiting Job Discrimination Questions and Answers, 2009). The largest class action in the history happened in August 2004...
3 Pages(750 words)Essay

...to be entangled with one another before because the parliament is composed of the House of Commons and the House of Lords but the latter acted as justices at the same time. This drawback was recently remedied substantially, albeit not completely, by the Constitutional Reform Act 2005.1 For instance, there is now a Supreme Court under Part 3 of the law which has taken over the judicial powers of the House of Lords which used to have appellate jurisdiction. Being then all under the Queen, the rule of law was said to be hinged on her sovereignty in the parliament which makes laws and on her sovereignty in the courts which interpret and apply the law. From...
6 Pages(1500 words)Essay

The Rule of Law

...of law in our world as a global society where diversity and tolerance are key points in our everyday agendas. There some theorists and researchers who have written about the rule of law lately. In this essay we deal mainly with two of such writers: Brian Z. Tamanaha and Rachel Kleinfeld Belton. We have chosen their papers as our source material because their points of view seem to be rigorous and comprehensive in the different facets of the rule of law that they talked about. Tamanaha does his best to be epistemic when dealing with the rule of law as a general principle that it is often misunderstood...
12 Pages(3000 words)Essay

...that is so markedly sports-like will eventually be stifled with the laws, rules and standards that these politicians manage to write on paper. Admittedly, the government having a say on the regulation of sports is logical given the social, educational and cultural impacts of sports, such should not be over done. Regulations, after all, are never a guarantee of fair play (Weatherill, 2003; Weatherill, 2005; Bogusz, 2007). In any legal challenge to the increasing involvement of the European Commission with sports regulations, it is better if the different sports associations band together – create a group – to challenge the laws laid down by the EU or challenge the EU’s...
4 Pages(1000 words)Essay

...Week 4 Dis Soc 205 Week 4 Dis Soc 205 Impact of Stratification Legal of Services in the United s Client demands often drive theinnovation along the legal service industries. For decades, clients, particularly the large corporate clients, have been influential on the way law firms handle substantial matters such as staffing and billing. Recently, the clients have established a new variety of practical and financial requirements for the legal service providers to ensure a continued patronage. These large industries have also intensely influenced the stratification of legal services, service level agreements, and charges to billing structures (Neubauer and...
1 Pages(250 words)Essay

...was nominated to 6th Circuit together with Susan Bieke Neilson. President Bush also nominated Miguel Estrada to D.C Circuit Court and Priscilla Owen to the Fifth Circuit Court of Appeals (Geyh, 2006). President Bush made the appointments based on each Judicial officer’s past career record and prior judicial rulings. For instance, William Myers had served as Deputy Counsel in Department of Energy under Bush administration and had made certain rulings in favor of Corporations rather than the public interest (Geyh, 2006). Janice Rogers Brown was nominated to D.C Circuit Court of Appeals, but was more inclined to conservative Republican politics in her speeches and had deep seated hostility towards civil...
1 Pages(250 words)Essay

...Three Societal Trends that Impact Families The society today has come to see many different changes in the ways through which families are structured. These changes have mainly been based on the development of new technologies, changes in ethnic composition, as well as economic uncertainty. This paper will focus on these aspects of life while at the same time addressing the manner through which some, especially economic uncertainty, is related to family and love. Furthermore, this paper will make a study of love with reference to two films, mainly Gone with the Wind and The War of the Roses. These films were selected because the first is based on the development of love, which started out as a result of...
6 Pages(1500 words)Essay

Analysis of The Core of the American Justice System

...) Because the United States is both a democracy and a pluralist society, it is important that diverse groups appear to have a voice in the laws that govern them. Allowing black people to serve on juries strengthens "public respect for our criminal justice system and the rule of law."(205) The Supreme Court has found that the legitimization function is particularly valuable in cases involving "race-related" crimes.(206) According to the Court, in these cases, "emotions in the affected community [are] inevitably . . . heated and volatile."(207) The potential presence of black people on the jury in a "race-related" case calms the natives, which is especially important in this type of case because "[p]ublic confidence in the integrity... a part...
85 Pages(21250 words)Annotated Bibliography
sponsored ads
Save Your Time for More Important Things
Let us write or edit the essay on your topic "Rule of Law Paper/Soc 205" with a personal 20% discount.
GRAB THE BEST PAPER

Let us find you another Essay on topic Rule of Law Paper/Soc 205 for FREE!