Comments (0)
Add to wishlistDelete from wishlist
Cite this document
Summary
Architectures and engineers argue that the stability and durability of a structure are directly related to the achievement of proper soil…
Download full paperFile format: .doc, available for editing
HIDE THIS PAPERGRAB THE BEST PAPER94.3% of users find it useful 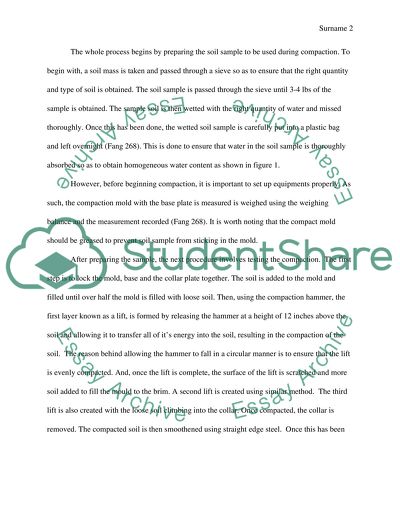 Soil Compaction Experiment Procedure Fang argues that soil compaction is one of the most crucial components in construction of airfields, roads and building foundations (250). Architectures and engineers argue that the stability and durability of a structure are directly related to the achievement of proper soil compaction. As such, structural failures of airfields and roads, as well as damage resulting from settlement of foundation are due to failure to achieve the desired soil compaction. But what is soil compaction? Soil compaction refers to the mechanical process of densifying a soil. This is achieved by pressing the soil particles together into a close state of contact so as to expel air from the soil mass. This helps in reducing void ratio. The main purpose of soil compaction is to reduce settlement under working loads, increase the soil shear strength, and prevent accumulation of large water pressures that may result in soil liquefaction during earth tremors.
Equipment
The following equipment will be necessary in order to achieve a proper soil compaction: 5 small tin containers; compact mould; metallic mixing pan and a plastic water bottle; weighing balance of up to 10kg for determining the weight of soil mass; a sieve; straight edged steel to smoothen soil sample ends; and a compaction hammer of about 5.5 lbs (Fang 262).
Procedure for soil compaction
The whole process begins by preparing the soil sample to be used during compaction. To begin with, a soil mass is taken and passed through a sieve so as to ensure that the right quantity and type of soil is obtained. The soil sample is passed through the sieve until 3-4 lbs of the sample is obtained. The sample soil is then wetted with the right quantity of water and missed thoroughly. Once this has been done, the wetted soil sample is carefully put into a plastic bag and left overnight (Fang 268). This is done to ensure that water in the soil sample is thoroughly absorbed so as to obtain homogeneous water content as shown in figure 1.
However, before beginning compaction, it is important to set up equipments properly. As such, the compaction mold with the base plate is measured is weighed using the weighing balance and the measurement recorded (Fang 268). It is worth noting that the compact mold should be greased to prevent soil sample from sticking in the mold.
After preparing the sample, the next procedure involves testing the compaction. The first step is to lock the mold, base and the collar plate together. The soil is added to the mold and filled until over half the mold is filled with loose soil. Then, using the compaction hammer, the first layer known as a lift, is formed by releasing the hammer at a height of 12 inches above the soil and allowing it to transfer all of it’s energy into the soil, resulting in the compaction of the soil. The reason behind allowing the hammer to fall in a circular manner is to ensure that the lift is evenly compacted. And, once the lift is complete, the surface of the lift is scratched and more soil added to fill the mould to the brim. A second lift is created using similar method. The third lift is also created with the loose soil climbing into the collar. Once compacted, the collar is removed. The compacted soil is then smoothened using straight edge steel. Once this has been done, the mold together with plate and the soil is weighed on a balance and weight recorded. As this is done, the empty containers are also weighed and recorded (Fang 269).
Once this has been done, more water is added to the soil and thoroughly mixed so as to spread water making water content uniform. The test is repeated preparing the 3 lifts in a similar manner and collection the sample soil in the tin cup. Once the second test is complete, three more tests are performed then the sample allowed to dry up for a period of 24 hours by placing it in an oven. This ensures that all water contents are removed from the soil. Finally, the sample is re-weighed to obtain the dry weight of the soil mass. This gives a figure by which the water content can be calculated from each of the soil samples (Fang 269).
Once the water content has been calculated and figure recorded the next data to be calculated is the soil mass in the mold. The density of the soil mass is then calculated in g/cm3. It is noted that the value of wet soil sample can be calculated using the formula γwet = ρ x 9.807. Finally the dry weight is calculated using the formula γdry = γwet / [1+ (ω%/100)]. From these values the soil compaction can be obtained (Fang 269).

CHECK THESE SAMPLES OF Writing Procedure for soil compaction

...?CAUSES OF BENT GRASS AND EFFECT OF SOIL COMPACTION ON TURF RECOVERY Parklands, college campuses, athletic fields, and farms have an interest in controlling the damage to turfgrasses from foot traffic. The consequences of heavy traffic to grasses, as well as soil are quantified. Measurements and variables are described that influence the height potential of turfgrass, as well as its ability to recover from the damage induced by foot traffic. Analyses were conducted to determine the greatest height attainment by grass transections, and the correlation towards soil conditions; particularly soil compaction. While there is abundant research...
11 Pages(2750 words)Coursework

..., in the type of materials used (Thinaga 2004). Here are some of the techniques that are being used today to strengthen the soil shear strength. Soil Compaction The soil generally is unstable and has many weak and hard areas. Soil compaction is the movement of soil particles (sand, silt and clay) closer together due to external forces. These external forces can come in a shape of voluntary force or non-voluntary. People trudging over the soil, cars passing over it or things such as littering can all pressurize the soil into compaction. The soil, as a...
8 Pages(2000 words)Essay

...Running head: Advertisements Advertisement procedure Effects of new trends on advertising New technology, audience fragmentation, business and media consolidation and easily obtainable consumer credits are some of the new trends which can affect the current advertising industry. Advertising was earlier concentrated mainly on print, radio and television like media ads. But currently the development of digital electronics has introduced a new concept of digital signage in to the advertising world. “In digital signing, the electronic data is handled and controlled from one administrative console running the digital signage software and is sent across to others terminals without having to change their physical location. In...
7 Pages(1750 words)Essay

.... A suspect should be suppressed since the constitution provides that police can question witnesses at crime scenes without reading them their Miranda rights, and should a witness implicate themselves in the crime during that questioning, their statements could be used against them later in court. Nonetheless, a suspect should not be suppressed since the same constitution protects suspects from self incrimination. The adjudication process of the criminal law differs due to jurisdiction. Generally though, it assumes the same format. The burden of proof is always on the prosecution in most countries with a democratic rule of law. The world ought to hold weight in the presumption of innocence for the criminal procedure to...
2 Pages(500 words)Article

...Soil Concentration Elemental composition that is found in soils has anomalies leading to plant stress, as well as increased salt concentration (Cl-), and Ca2+ mineral nutrients. The salt concentration found in soil solutions is measured in form of its salinity. The amount of Cl- present in a given soil solution determines its salinity, which is required for proper plant life. Cac2+ is an important mineral nutrient in soil for plant life, but is harmful if in excess. The main cause of soil salinity can be attributed to the water management practices used on a given soil solution. High concentrations of Cl- destabilize...
1 Pages(250 words)Essay

...Policy and procedure writing exercise Security policy on airline premises entry and exit: Policy The back door entry to the premises has been closed indefinitely. All visitors to the organization’s premises, employees included, shall use the front door only. Purpose Security has become one of the main concerns for this organization, from the time we noticed an attempted attack on the organization, on Monday last week. It was realized that a terrorist had entered the building through the back door when the security guards were busy helping people store their luggage on the front store. This being an airline headquarter; we receive many visitors to this organization, who are usually passengers coming to...
2 Pages(500 words)Assignment

...Soil Behavior SOIL BEHAVIOR Soil behavior involves all the processes occurring on the surface of the earth as a result of the agents of the very processes. This research paper explores the characteristics of soil under: liquefaction, soil improvement, geophysical methods, excavation safety and intelligent compaction. A case study for geotechnical failure will also be provided. Liquefaction is the process by which the earthquake or heavy material on the earth surface causes the earth materials to reduce in its stiffness and strength, thus rendering it vulnerable to erosion by the erosion agents. It occurs majorly in soils...
2 Pages(500 words)Research Paper

...Engineering and construction: Use of Soil Machines to Test Property of Soil of a Site By Presented to >
3 Pages(750 words)Essay

...Soil order and their associated environmental climates Arid soil Soil order The soil orders of arid soils are always free-draining. However, these soils receive insufficient rainfall due to the climate and it is for this reason that they always retain their soluble salts. The order of arid soils is characterized by three levels which are: Oxisol Vertisol Entisol It is however important to note that not all arid soils are classified in the aridsol order. Some have unique compositions that place them in other orders of soil. Oxisols are weathered soils found in the...
2 Pages(500 words)Essay

...SOIL MECHANICS A. Procedure for installing retaining wall Step one Asses and determine the height of the wall, H. Determine the properties of the entailed din the granular backfill substance for instance unit weight (1) and entailed angle of friction (ɸ1) Step two Next note and obtain the soil-tie friction angle (ɸU) and the also the related values of FS (B) and FS (P) In case if internal stability Step three Assume the values for the horizontal and vertical tie spacing thus assume width of the reinforcing strip .w to be used in the process. Step four Derive the a from the equation Step five: derive the tie forces at various levels while considering the equation The tie force...
5 Pages(1250 words)Assignment
sponsored ads
Save Your Time for More Important Things
Let us write or edit the lab report on your topic "Writing Procedure for soil compaction" with a personal 20% discount.
GRAB THE BEST PAPER

Let us find you another Lab Report on topic Writing Procedure for soil compaction for FREE!