Comments (0)
Add to wishlistDelete from wishlist
Cite this document
Summary
This is according to the They say/ I say author who advocates for a constructive dialogue between persons despite varying beliefs between them. The world according to the author is changing one; thus, it…
Download full paperFile format: .doc, available for editing
HIDE THIS PAPERGRAB THE BEST PAPER95.5% of users find it useful 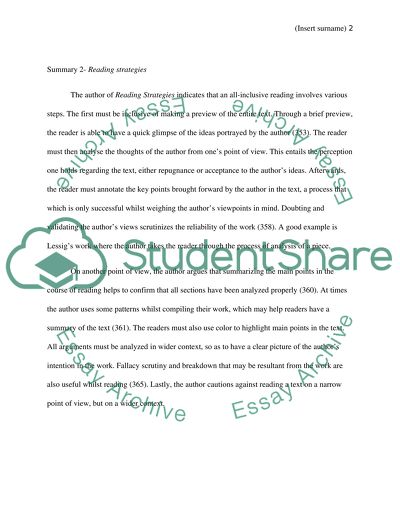 Extract of sample "Entering the conversation"

Entering the conversation Summary They say/I say Human beings cannot live singlehandedly and on a one- sided point ofview. This is according to the They say/ I say author who advocates for a constructive dialogue between persons despite varying beliefs between them. The world according to the author is changing one; thus, it is of essence that human beings are social and flexible enough to incorporate the thoughts of others (14). Humans are social beings who have to in one way or another be in consultation and conflicts with other persons. This interprets that engaging in a conversation is likely to face challenges ranging from disagreements to consultations. In the event of such occurrences, human beings have been urged to accommodate the feelings and opinions of other parties involved in the dialogue (14).
The author gives a detailed example of the notions a lot of people have on vegetarianism. Most people are of the opinion that vegetarianism is a lifestyle while others hold the opinion the lifestyle is dreadful (15). All in all, the author analyses both sides of the concept so as to include the opposing ideas and the ones for the lifestyle. Essentially, this is to mean that all propositions and opinions of all persons are important and must be considered in entirety. Anything is expected in the course of any form of conversation (14).

Summary 2- Reading strategies
The author of Reading Strategies indicates that an all-inclusive reading involves various steps. The first must be inclusive of making a preview of the entire text. Through a brief preview, the reader is able to have a quick glimpse of the ideas portrayed by the author (353). The reader must then analyse the thoughts of the author from one’s point of view. This entails the perception one holds regarding the text, either repugnance or acceptance to the author’s ideas. Afterwards, the reader must annotate the key points brought forward by the author in the text, a process that which is only successful whilst weighing the author’s viewpoints in mind. Doubting and validating the author’s views scrutinizes the reliability of the work (358). A good example is Lessig’s work where the author takes the reader through the process of analysis of a piece.
On another point of view, the author argues that summarizing the main points in the course of reading helps to confirm that all sections have been analyzed properly (360). At times the author uses some patterns whilst compiling their work, which may help readers have a summary of the text (361). The readers must also use color to highlight main points in the text. All arguments must be analyzed in wider context, so as to have a clear picture of the author’s intention in the work. Fallacy scrutiny and breakdown that may be resultant from the work are also useful whilst reading (365). Lastly, the author cautions against reading a text on a narrow point of view, but on a wider context.
Works cited
Norton Field Guide, Chapter 40. Reading Strategies. Lecture notes. 2012. Print.
They say/I say, “Introduction”. Lecture notes. 2012. Print. Read More
Share:
Tags
Cite this document
(“Entering the conversation Essay Example | Topics and Well Written Essays - 500 words”, n.d.)
Retrieved from https://studentshare.org/miscellaneous/1602936-entering-the-conversation

CHECK THESE SAMPLES OF Entering the conversation

...?Conversation Speech acts and moves Speech acts are analysed at three different levels as follows: At the level where the speaker is observed as performing the speech or the locutionary act; at the level when the speech is actually performed and which consists of the phenotics and the verbal and syntactic aspects of meaningful language; and at the level of the meaning of the speech or the illocutionary act. Some scholars also define speech act at a further level, the perlocutionary level which implies the practical affect on the listener and comprises of pursuasion, enlightening, scaring, inspiring etc. (Austin 1962). On the other hand, some scholars like (Searle, 1969) postulate that speech primarily consists of the...
6 Pages(1500 words)Essay

...? Food For Thought: A Philosophical Conversation About Food The purpose of this paper is to pursue the possible philosophical avenues that could be taken in the discussion of food. The topic of food has been talked about simply as a mundane conversation piece, yet it can also be explored through various philosophical thoughts. Most likely, the area of Aesthetics, and even Ethics, will contribute to this discussion regarding food. Also, different philosophies from various times and places will be the point of reference with regard to this topic. Annotated Bibliography Allhoff, F. & Monroe, D. Food and philosophy. Malden, MA: Blackwell Publishing, Ltd. 2007. Print Allhof and Monroe’s book gives a very...
9 Pages(2250 words)Essay

They Say/I Say: The Moves That Matter in Academics Writing by Gerald Graff and Cathy Birkenstein

...Entering the Conversation In the introduction to ‘They say/I say: The moves That Matter in Academics Writing’, Gerald Graff and Cathy Birkenstein provide a template designed to enable readers present the authors’ ideas as they express their own in response to the author’s argument, hence becoming better writers with deeper level of critical and intellectual thinking. Specifically, Graff and Birkenstein argue that the types of writing templates on offer enable students to have a convectional way of structuring arguments based on guidelines of the template, and also allow writers to add their own views, making it flexible to their needs. As the authors themselves put it, “the template can be used to...
1 Pages(250 words)Book Report/Review

...notions as they establish the structure of the rhetorical situation and demonstrate there are underlining parameters in this communication. Entering the Conversation In the text ‘They Say/ I Say’ authors Graff and Birkenstein discuss the notion of ‘entering the conversation.’ Entering the conversation refers to the process of writing or potentially speaking that engages with a listener. In this way, one enters a conversation not simply by speaking their mind, but by considering the perspective and opinion of the opposing party. As such, the individual’s writing or speaking directly considers these...
2 Pages(500 words)Essay

A World of Difference/A Shrinking World: Entering a Conversation about Globalization

... Insights about how and why cultural groups tend to see themselves in terms of us versus them Globalization has brought the world into one, enabling the interaction of different communities and cultures to form one world. Supposing there were no races and people did not discriminate based on others skin color; the world would have been a much better place. Kwame Anthony Appiah and Franklin Foer try to elaborate on how cultural groups view themselves as belonging to one group, and disregard others. Kwame acknowledges that America consists of several races, but no race can be termed as being superior to the other. This cultural diversity has brought unique freedom, making it one of the most powerful countries in the world today... Insights...
4 Pages(1000 words)Essay

...Conversation School The conversation that I’ve recently took part in happened between me and my close friend and was engaged with discussion around a work of art in a museum. The communicative situation gave me an opportunity to observe different aspects of the speech act and my interlocutor’s behavioral patterns. The conversation started with an analysis of a piece of art. My interlocutor (Mike) was standing in front of the painting and tried to construct a consistent argumentation by pointing on the parts of the painting he was interpreting. His body language seemed constrained, because he crossed his legs and tried to protect his chest zone from time to time by crossing his hands or...
4 Pages(1000 words)Essay

2 Pages(500 words)Article
sponsored ads
Save Your Time for More Important Things
Let us write or edit the essay on your topic "Entering the conversation" with a personal 20% discount.
GRAB THE BEST PAPER

Let us find you another Essay on topic Entering the conversation for FREE!