Comments (0)
Add to wishlistDelete from wishlist
Cite this document
Summary
Brian’s current mood episode falls under major depressive episode as he has problems with sleeping and eating, trouble concentrating, loss of energy and death thoughts. Brian’s condition meets the following standard criteria for major depressive episode:
Based on the…
Download full paperFile format: .doc, available for editing
HIDE THIS PAPERGRAB THE BEST PAPER94.1% of users find it useful 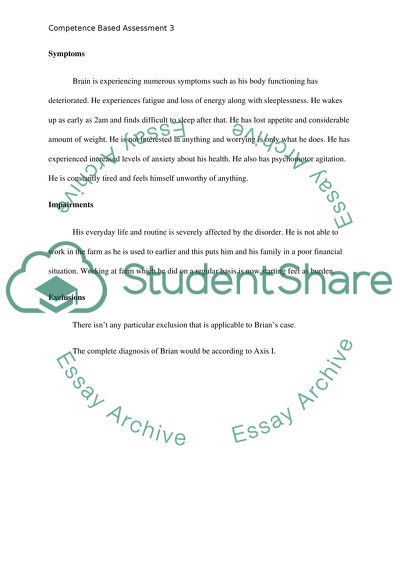 Extract of sample "Competence based assessment"

Competence Based Assessment Competence Based Assessment Mood Episode Brian’s current mood episode falls under major depressive episode as he has problems with sleeping and eating, trouble concentrating, loss of energy and death thoughts. Brian’s condition meets the following standard criteria for major depressive episode:
Depressed mood most of the day. Especially it is worse in the mornings and gets slightly better during evening.
Diminished interest or pleasure in all. As told by his wife, Brain has lost interest in almost everything. He finds no enjoyment in doing anything.
Significant weight loss.
Insomnia. He is unable to sleep after 2am.
Psychomotor agitation. During the interview he could sit stable and had to walk to the window several times.
Fatigue
Disorder and Severity Code
Based on the building blocks (mood episode), major depressive disorder is the appropriate disorder for Brian. Brian is suffering from major depressive disorder; single episode severe without psychotic features and the severity code is 296.23.
Brian’s quality of mood is lower than normal where he is depressed most of the time.
Even though there isn’t an exact time frame it is clear from the case study that mood episodes have existed for more than 2 weeks. Brian has felt bad from most of the day and everyday as per the observations.
Symptoms
Brain is experiencing numerous symptoms such as his body functioning has deteriorated. He experiences fatigue and loss of energy along with sleeplessness. He wakes up as early as 2am and finds difficult to sleep after that. He has lost appetite and considerable amount of weight. He is not interested in anything and worrying is only what he does. He has experienced increased levels of anxiety about his health. He also has psychomotor agitation. He is constantly tired and feels himself unworthy of anything.
Impairments
His everyday life and routine is severely affected by the disorder. He is not able to work in the farm as he is used to earlier and this puts him and his family in a poor financial situation. Working at farm which he did on a regular basis is now starting feel as burden.
Exclusions
There isn’t any particular exclusion that is applicable to Brian’s case.
The complete diagnosis of Brian would be according to Axis I. Read More
Share:
Tags
Cite this document
(“Competence based assessment Case Study Example | Topics and Well Written Essays - 500 words”, n.d.)
Retrieved from https://studentshare.org/miscellaneous/1600074-competence-based-assessment

CHECK THESE SAMPLES OF Competence based assessment

...between weight attitudes and eating competence among college students. They found that those college students were more eating competent who were concerned with the quality of their diet, eating behaviour, internal regulation, food preparation, food acceptance and meal planning. A sample of 1,720 was involved in the research via internet survey, which was based on ecSatter inventory items. They found a multiple regression in their results, which pointed towards the fact that weight concerned students were more eating competent. Schembre et al. (2009) discussed the development and validation of a weight related questionnaire, which reflected “recent advancement in the...
10 Pages(2500 words)Book Report/Review

...? Performance Based Assessment number: Performance Based Assessment Valdez & O'Malley argue that performance-based assessment comprises of any type of assessment where the student builds a response in writing or orally. The authors go on to clarify that it can be informal or formal, an assigned task or an observation. Chase (2009) goes further to argue that performance-based assessment needs learners to achieve complex and considerable tasks, though bringing to bear earlier knowledge, current learning, and significant skills to resolve authentic or realistic problems (Valdez & O'Malley,...
4 Pages(1000 words)Essay

...in accordance to what is being taught. Curriculum based test measures the functioning of student in relation to knowledge and skills as outlined in the curriculum. It is noteworthy that the curriculum-based measurement measures the progress and competency of a student in the basic areas of skill such as math, spelling, fluency, and written language. Instruction is the organized process of giving information, resources, and opportunities to assist in development of students’ knowledge and skills. Learning environment is a setting in which students are given instructions. A lesson is the activity that is to be done or content that is to be taught during a given period. Reliability is the...
12 Pages(3000 words)Research Paper

...into the communicative problems that affect our urban societies” (47). Although Gumperz based his proposal on conversation, the term “communicative competence” can have a broader application, also to written texts. This concept enables the comprehension of problems when learning a foreign language, cross-cultural issues and misunderstanding between native speakers. To achieve communicative competence should be the objective when native and nonnative speakers learn English. Orthography and grammar rules are of limited importance in comparison to the strategies that are required in order to communicate adequately in our society. We can produce a text with perfect orthography and grammar,...
8 Pages(2000 words)Essay

...Managing Employee Relations in Contemporary Context British Airways Introduction British Airways (BA) is the official carrier airline of Britain and it is headquartered near the London Heathrow Airport. Based on fleet size, BA is the largest airline in Great Britain. “British Airways was formed in the 1970s as the result of a merger between BOAC (British Overseas Airways Corporation) and BEA (British European Airways)” (Case study given). BA functioned as a public company for around 13 years and it was privatized in 1987 when the majority of the public companies were nationalized by the government of that time. From then onwards problems started to creep into the BA organization. The combined impact of recession and intensified... the...
9 Pages(2250 words)Essay

Rationale For Performance Based Assessment

...﻿Rationale for Performance Based Assessment ELL (English Language learner) population has witnessed a steep rise off late. The ELL population has been found to grow faster than the overall student population. As per the National Centre for Educational Statistics, the general student section has seen a growth of 9% from the year 200 to 2010. The ELL section, on the other hand has seen a rise of a whopping 65%. Also, Noam Chomsky’s nativist perspective suggests that the humans are biologically programmed to gain knowledge. Noam talks about a language acquisition device in every individual which contains grammatical rules common to all languages. These statistics and views enforce my belief in the fact...
8 Pages(2000 words)Essay

...Competence Based Assessment: Danny Finch This specific assessment concerns patient Danny Finch. Finch had an ear problem before reporting to the clinic. Upon investigating Finch’s ear the doctor was not able to locate any physical auditory dysfunctions. As Finch continued speaking the doctor eventually decided to send him to the mental health clinic. At the mental health clinic it was discovered that the sounds Finch heard were not simply noises, but full-scale voices. The voices were screaming at him to not tell about his drinking, as well as encouraging him to kill himself. While he was committed to the mental health ward, he refrained from taking his medication....
4 Pages(1000 words)Case Study

...Importance of designing room based assessment affiliation 04 December room based assessment is very effective in as far as teaching and learning for English Language Learners among students are concerned. Brantley (2007) posits to the effect that teachers are able to gather enormous information about each student in the classroom through verbal interactions, checklists, observations, work samples, formal assessments as well as interaction. This process helps the teachers to gain knowledge about what the students want not what they want to teach their students. This also helps to create mutual understanding between the teacher and the student and the...
2 Pages(500 words)Essay

...Cultural competence al affiliation Cultural competence Cultural competence is an imperative ongoing process in nursing thatneeds to be embraced and understood in addressing patients. The world has become small as people from myriad ethnicity and cultures have intermingled. As a result, nurses acquire skills and knowledge that refine their cultural competence in the workplace. Cultural preservation ensures that nurses utilize cultural practices that are backed, scientifically, alongside biomedical system (Jeffreys, 2010). Acupuncture and acupressure are examples of cultural preservation where nurse use scientifically supported practices in treating patients. Cultural accommodation strategies include covering baby’s head and burial... between...
1 Pages(250 words)Essay
sponsored ads
Save Your Time for More Important Things
Let us write or edit the case study on your topic "Competence based assessment" with a personal 20% discount.
GRAB THE BEST PAPER

Let us find you another Case Study on topic Competence based assessment for FREE!