Comments (0)
Add to wishlistDelete from wishlist
Cite this document
Summary
Nowadays, the court is in a state of perplexity concerning of two opposing government principles, and these are “the rights of parents” and “the interest of the child.” These two government principles have undergone various developmental flux within court regulations in…
Download full paperFile format: .doc, available for editing
HIDE THIS PAPERGRAB THE BEST PAPER97% of users find it useful 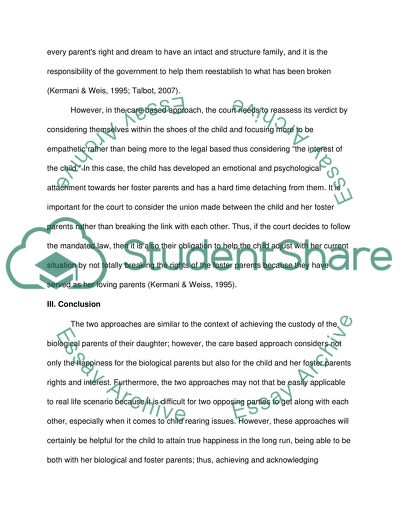 Ethical Dilemma I. Introductory case Nowadays, the court is in a of perplexity concerning of two opposing government principles, and these are“the rights of parents” and “the interest of the child.” These two government principles have undergone various developmental flux within court regulations in order to equateary interests for the child’s benefit (Kermani & Weiss, 1995, p. 261). In line with this, an ethical analysis was made regarding a tribunal verdict that promulgated the full custody of rehabilitated biological parents to a nine year old girl, but was reunited with them against her own will and interest.
II. Ethical Grounds
In the case that the child does not agree on the verdict being declared by the court, then it is the responsibility of the court to reassess their verdict and reevaluate the certain dilemma for a possible solution to the problem.
In a rule-based approach, the court needs to reassess the laws in relation to the current case. According to the Kermani and Weis (1995), biological parents are entitled the power and warrant to raise their own kids; thus, considering one of the government principle which is “the right of the parents” (p. 261). Nevertheless, some parents are guilty of parental negligence towards their children, and then government agencies have the power to overrule such rights, through court, and take their children away from their custody. However, parents can regain their rights when proven that they have change for the better and best for their children, similar to the case, the biological parent undergo rehabilitation and have the confidence to take back their daughter. Thus, it is every parents right and dream to have an intact and structure family, and it is the responsibility of the government to help them reestablish to what has been broken (Kermani & Weis, 1995; Talbot, 2007).
However, in the care-based approach, the court needs to reassess its verdict by considering themselves within the shoes of the child and focusing more to be empathetic rather than being more to the legal based thus considering “the interest of the child.” In this case, the child has developed an emotional and psychological attachment towards her foster parents and has a hard time detaching from them. It is important for the court to consider the union made between the child and her foster parents rather than breaking the link with each other. Thus, if the court decides to follow the mandated law, then it is also their obligation to help the child adjust with her current situation by not totally breaking the rights of the foster parents because they have served as her loving parents (Kermani & Weiss, 1995).
III. Conclusion
The two approaches are similar to the context of achieving the custody of the biological parents of their daughter; however, the care based approach considers not only the happiness for the biological parents but also for the child and her foster parents rights and interest. Furthermore, the two approaches may not that be easily applicable to real life scenario because it is difficult for two opposing parties to get along with each other, especially when it comes to child rearing issues. However, these approaches will certainly be helpful for the child to attain true happiness in the long run, being able to be both with her biological and foster parents; thus, achieving and acknowledging Aristotle’s concept of being healthy, happy, and have a prosperous life (“Aristotle’s Ethics,” 2010).
References
“Aristotle’s Ethics.” (2010, Mar 29). In Stanford Encyclopedia of Philosophy online. Retrieved from http://plato.stanford.edu/entries/aristotle-ethics/#DocMea
Kermani, E., & Weis, B. A. (1995). Biological parents regaining their rights: A psycholegal analysis of a new era in custody disputes. The Bulletin of American Academy of Psychiatry & the Law, 23(2), 261-267.
Talbot, E. P. (2007). Successful family reunification: The contribution of social work theory in the provision of services and decisionmaking. Illinois Child Welfare, 3(1-2), 103-117. Read More
Share:
Tags
Cite this document
(“Ethical Dilema Assignment Example | Topics and Well Written Essays - 500 words”, n.d.)
Retrieved from https://studentshare.org/miscellaneous/1600002-ethical-dilema

CHECK THESE SAMPLES OF Ethical Dilema

...?Ethical Dilemma – Drugs Testing in Nigeria Introduction and Situational Analysis In 1996, Pfizer Inc., one of the world’s largest pharmaceutical companies, was attempting to complete the clinical trials of one of its major new compounds. Named Trovan, the product was designed as a new antibiotic which, researchers believed, would effectively treat pneumonia, meningitis, to name but a few of the 16 infectious diseases it was targeted to treat. It was estimated that the market value of this new drug would be in excess of $1 billion. Trovan had already undergone clinical trials on animals and on adult human patients. It had not yet been tested on children, and from tests which had been carried out on young animals,...
10 Pages(2500 words)Essay

...? Ethical Dilemma on Abortion Numerous s in the United s of America have been locked into a fierce debate over the issue of abortion being legalized. However, disregarding the legality of this act, it is essential to focus on the morality of the issue as well. Abortion has many trade-offs that involve a variety of values including a sense of where people come from. While the use of the right to abort can be legalized, the legality of the issue does not hold as much weight since this requires the elimination of some form of human life. Instead, one also needs to focus on the “ethical dilemma on abortion” (Ethics Score Board). Before understanding the different theories that surround this...
3 Pages(750 words)Essay

...? An Ethical Dilemma [Supervisor’s An Ethical Dilemma This paper attempts to discuss an ethical dilemma which has been observed in a professional environment. The paper further discusses about the philosophical approach of consequences, integrity and duties. Answer 1: The ethical dilemma that I observed in a professional environment was related to the use of corporate resources. The ethical dilemma includes a situation of my colleague that had a habit of conducting personal business on company time. The particular employee use to spend much of his time in conducting his personal business and affairs using corporate resources. The person spent hours using...
3 Pages(750 words)Essay

...? Ethical Dilemma CJA/585 October XX, Ethical Judgment Every individual is a human being and human beings have the right to be treated with justice and fairness; all men stand equal before God except for their virtues and conduct, and no one is a criminal unless proven with concrete reliable evidence. Thus, no person can be deemed a criminal or treated unjustly; even if a person is a criminal, he or she can only be punished by the court of law and individuals do not have the authority to punish another individual unless holding power vested by the court of law. It’s a dilemma in our society that individuals who are suspected to be criminals by law are treated as criminals by individuals in our society –...
4 Pages(1000 words)Essay

... Ethical dilemma Introduction An ethical dilemma, also referred to, as the moral dilemma is that brings two situations that are demands for a resolution but in either way the decision is made, it has to be short of something that will lead to consequences. The morals obligations or precepts in this case conflicts to the extent that reaching a convincing conclusion is intolerable. This informs that in the situation of ethical dilemma, the stipulated moral guiding cannot be used to logically determine which course is right and which one is not; whichever action taken, there has to be a wrong and a justified reason for the same. Moral dilemmas have different origins and depend on the source, they can be classified as those from moral... ...
6 Pages(1500 words)Research Paper

...Ethical Dilemma AFFILIATION: Ethical Dilemma Keeping in view the information given in the case, it is necessary to point out the fact that a decision has been taken against the Middle Eastern man based on some ethical reasoning and a further response is required on whether further investigation should be carried out to know whether that person is actually guilty or not. The case demands that more reasoning be presented as to whether further follow up on the Middle Eastern man is required or not and why. Ethical Judgment As mentioned in the case, the Middle Eastern man had a view that the attack of 9/11 was justified and some other men also came to meet him so there was a...
4 Pages(1000 words)Essay

...Ethical Dilemma AFFILIATION: Ethical Dilemma The case builds a scenario in which a prosecutor has been given the task of dealing with a case which involves deciding the fate of a 12 year old boy who has allegedly carried out a ruthless attack. The lawyer is of the opinion that the child merely accompanied his elder brother to the crime scene so he should not be treated the same as the adult criminals and that his case should be tried in the juvenile court. But the juvenile court has refused. Now the response is required as to what should be the stance of the prosecutor that whether he or she treats the teenager as an adult or bargains for a reduction on the charges at him. Ethical...
4 Pages(1000 words)Essay

...Ethical dilemma al affiliation Ethical dilemma In the society today, there are varying opinions regarding euthanasia. Some families go to an extent of asking the medical practitioners to terminate the lives of their loved ones especially when they feel that their loved ones are suffering. This essay will attempt to analyze both sides of euthanasia. From the case of Schiavo, her husband requested for her killing as he claimed that her wife would not withstand her condition even if she survived. He claimed to have had this conversation with her prior to her death (Franklin Springs Family Media, 2009). However, Schiavo’s parents rejected this move as they were of the opinion that euthanasia is against the...
1 Pages(250 words)Admission/Application Essay

...﻿«Ethical dilema on Abortion» Introduction Birth of a child is one of the most wonderful blessings of God for any family. It not only makes a family happy but also proves to be great source of pleasure and contentment for a woman. Being pregnant is a dream for almost every married woman in the world. Godbole (2010) asserts, “Being a mother completes a woman”. However, sometimes the pregnancy turns out to be source of fear and discontent for a woman. There are many factors, which makes woman unhappy with the pregnancy such as low financial status, pregnancy because of rape, forced sexual intercourse, and pregnancy after divorce. In such cases, most of the women go for abortion in order to terminate the...
14 Pages(3500 words)Term Paper
sponsored ads
Save Your Time for More Important Things
Let us write or edit the assignment on your topic "Ethical Dilema" with a personal 20% discount.
GRAB THE BEST PAPER

Let us find you another Assignment on topic Ethical Dilema for FREE!