Comments (0)
Add to wishlist Delete from wishlist
Cite this document
Summary
Human Immunodeficiency Virus / Acquired Immune Deficiency Syndrome was found to have been the major cause of mortality by an infectious agent back in Africa back in 2002 (Moore & Pubantz 191). The infection was reported to concentrate in the groups which are aged between 15 and…
Download full paper File format: .doc, available for editing
HIDE THIS PAPERGRAB THE BEST PAPER94.8% of users find it useful 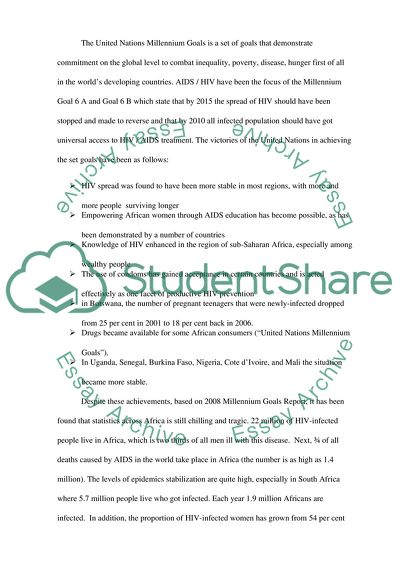 Download file to see previous pages virus in this part of the continent (Wilson et al 1) the spread of HIV / AIDS has been strongly linked to poverty and unsatisfactory life conditions, it is also true that the lifestyle and beliefs of African peoples expose them to infection.
A range of measures to stop and prevent the spread of the mortal disease on the African continent have been taken throughout the recent decade, with two organizations playing important roles in anti-AIDS policies. Specifically, these are the United Nations and NEPAD. In this part of the paper, I will compare the anti-AIDS / HIV activity by these two organizations with focus on their goals, impact, and results as to stopping the AIDS pandemic on the African continent.
First of all, let us briefly review major international documents that impacted the activity of the United Nations and NEPAD aimed at fighting AIDS. These are Millennium Goals, Monterrey Consensus, Paris Declaration, and AAA (Accra Action Agenda). While these documents predominantly focus on improvement of the socio-economic situations in African and other developing countries, they also recognize that the latter are closely connected to health issues. In particular, rise of the level of life quality is seen as one of the ways to combating AIDS and helping people get adequate treatment.
The United Nations Millennium Goals is a set of goals that demonstrate commitment on the global level to combat inequality, poverty, disease, hunger first of all in the world’s developing countries. AIDS / HIV have been the focus of the Millennium Goal 6 A and Goal 6 B which state that by 2015 the spread of HIV should have been stopped and made to reverse and that by 2010 all infected population should have got universal access to HIV / AIDS treatment. The victories of the United Nations in achieving the set goals have been as follows:
Despite these achievements, based on 2008 Millennium Goals Report, it has been found that statistics across Africa is still chilling and ...Download file to see next pages Read More
Share:
Tags
Cite this document
(“Comparison between the UN and NEPAD in the HIV/AIDS from the Research Paper”, n.d.)
Comparison between the UN and NEPAD in the HIV/AIDS from the Research Paper. Retrieved from https://studentshare.org/miscellaneous/1599943-comparison-between-the-un-and-nepad-in-the-hivaids-from-the-development-view

“Comparison Between the UN and NEPAD in the HIV/AIDS from the Research Paper”, n.d. https://studentshare.org/miscellaneous/1599943-comparison-between-the-un-and-nepad-in-the-hivaids-from-the-development-view.
Comments (0)
Click to create a comment or rate a document

The work of John Rawls mainly concentrates on the social institutions and virtues of the society namely, social justice, political liberty, and equality. In his work, Rawls’ has called justice as the “basic structure of the society” (Rawls, 1999, p. 7). Each individual enjoys a basic level of...
7 Pages (1750 words) Essay

This follows the common law theory that cases that have a great deal of similarity should need to be dealt with similarly and decisions or court verdicts passed accordingly, although this may not be viewed as strict practice. Custom, as a historical source of law, could be said to be the legislative statutes or laws that need to be implemented from time to time, and could also be termed as statutory laws that monitor public conduct. Thus, it could be said that while regulatory laws are created and nurtured by legislations and regulations, through the executive powers enforced by executive branch agencies, this is done through the delegation of authority from the top downwards. However, in the case of common law or case law, decisi...
6 Pages (1500 words) Assignment

Any child that sets foot into the classroom carries with him/her a myriad of experiences and backgrounds; thus, making it essential to perceive the child in relation to the systems and dynamics that surround him/her. “All areas of development depend on the context of children’s lives—children’s experiences in families, schools, neighborhoods, community organizations, cultural and et...
7 Pages (1750 words) Case Study

Designing an effective training instruction plan that will address the main concerns of the students is the most challenging part of the internship. Using the ADDIE model, I plan to design a training instruction material by integrating the research sur...
30 Pages (7500 words) Thesis
sponsored ads
Save Your Time for More Important Things
Let us write or edit the research paper on your topic "Comparison between the UN and NEPAD in the HIV/AIDS from the development view" with a personal 20% discount.
GRAB THE BEST PAPER

Let us find you another Research Paper on topic Comparison between the UN and NEPAD in the HIV/AIDS from the development view for FREE!